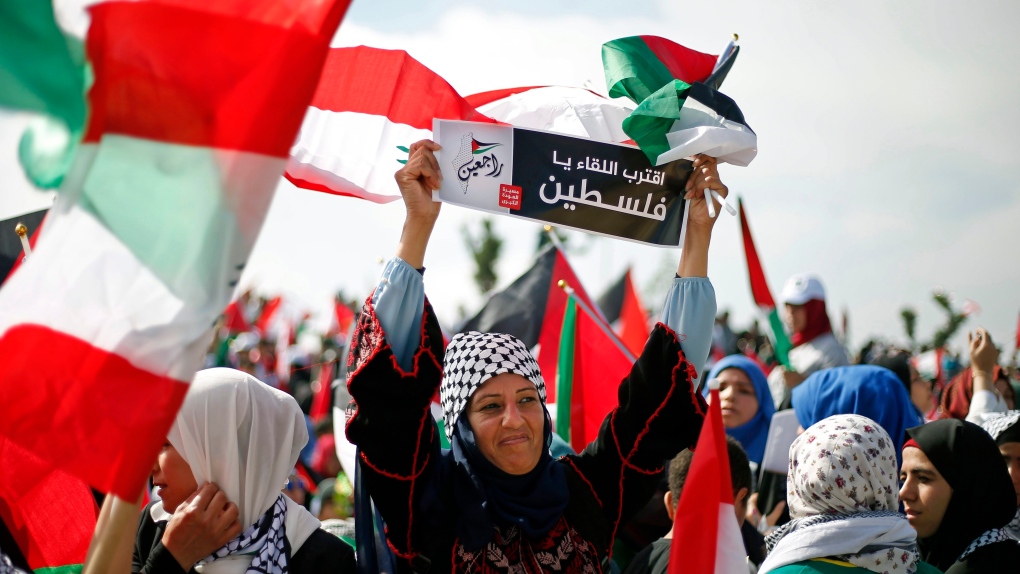 A Palestinian woman living in Lebanon holds a placard with Arabic that reads, "We will meet soon Palestine, we will return," during a rally to mark the 70th anniversary of what Palestinians call their "nakba," or catastrophe on Tuesday, May 15, 2018. (AP Photo/Bilal Hussein)

OTTAWA -- Palestinian diplomats say they welcome the Trudeau government's decision not to attend the controversial opening of the new American embassy in Jerusalem on Monday.

Canada, along with its major allies, does not support the U.S. embassy move to Jerusalem, saying that's a decision for a future peace agreement between the Palestinians and Israelis.

Monday's inauguration of the new U.S. embassy sparked the bloodiest day in four years at the Israel-Gaza border as Israeli forces killed more than 50 Palestinians.

The carnage unfolded several dozen kilometres away from where the Trump administration was following through on its decision to move the U.S. embassy to Jerusalem from Tel Aviv.

Israel blames Hamas for inciting the violence, a position that its ambassador to Canada reiterated in a statement released in Ottawa.

Ambassador Nimrod Barkan said Hamas is a terrorist organization that is trying to "hijack the future of the Palestinian people for its own nefarious ambitions."

But the Palestinian delegation in Ottawa called the U.S. embassy move "unilateral and illegal" and Israel's military response to the protests an "immoral act" that relied on "excessive force."

"Those shocking and bloody images can't leave us without welcoming the decision of the government of Canada and other governments who didn't participate in the so-called inauguration ceremony of the U.S. on Palestinian land," said the statement from the Ottawa delegation.

But the spokesman for Freeland said Canada wasn't on the guest list for the Jerusalem event.

"It was a bilateral event between the U.S. and Israel and we were not invited," spokesman Adam Austen said in an email.

On Monday, Freeland tweeted that the violence against civilians, journalists and children was "inexcusable." She said all parties to the conflict have the responsibility to protect civilians.

On Tuesday, Trudeau reiterated Canada's long-held position calling for an end to the violence and for both sides to get back to the negotiating table.

"We know that the only way forward is through direct negotiations between Palestinians and Israelis to get to a two-state solution," said Trudeau. "That is what Canada and the international community are pushing for."