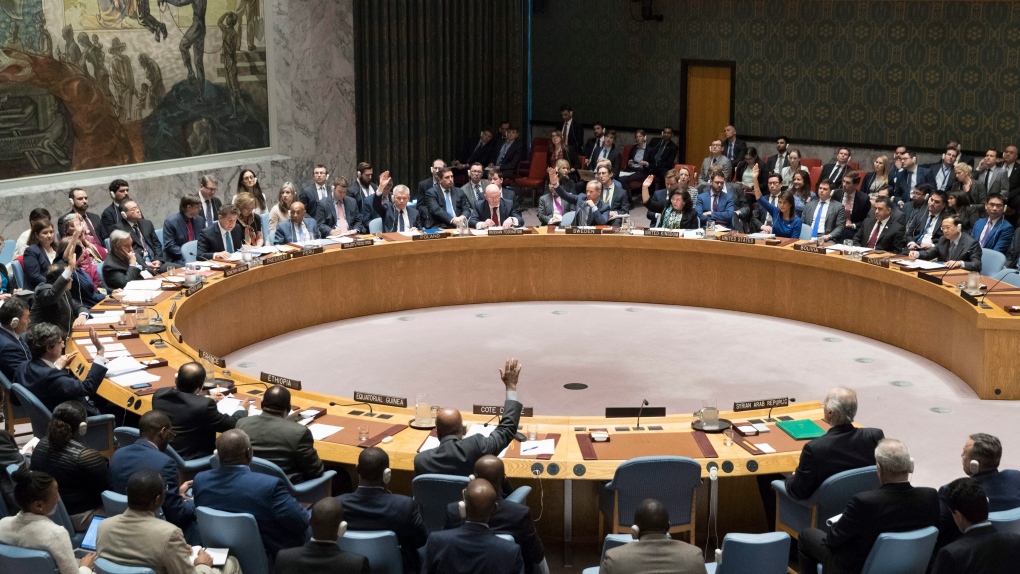 Members of the United Nations Security Council vote on a resolution during a meeting on the situation in Syria, Saturday, April 14, 2018 at United Nations headquarters. (AP Photo/Mary Altaffer)

OTTAWA -- Canada is still vying to win a seat on the United Nations Security Council but it's already warming up the chair with a plan to hire trainers for Canadian officials.

The federal government issued a notice Friday saying it intends to award a contract worth an estimated $120,000 to New York-based organization Security Council Report to educate Canadian personnel.

The contract is expected to run from Feb. 24 through the end of the year, the notice says.

Canada is seeking a non-permanent seat on the Security Council, considered the most powerful UN body, for two years beginning Jan. 1, 2021.

It faces tough competition from Norway and Ireland for one of two available seats in the June election.

The council, which has five permanent members and 10 elected, non-permanent ones, can authorize military action, organize peacekeeping missions and apply economic sanctions.

The government notice says the training must "address thematic and country priorities of interest to Canada in its preparation for a seat on the council."

Global Affairs Canada plans to give the training contract to Security Council Report, an independent, non-profit body, unless another potential supplier indicates by the end of the month it can meet the department's detailed requirements.

The organization's website says it works to advance the transparency and effectiveness of the security council by providing information about its activities, encouraging analysis of issues and assisting incoming members.

Global Affairs could not immediately say why training was being arranged before Canada had secured a council seat, or what would become of the exercise should Canada fail to win one.

The tender notice indicates the sessions will teach Canadian officials about the council's mandate, dynamics, working methods, tools and powers including use of force, sanctions and fact-finding missions.

They will also delve into council relations with other international and regional organizations, resolution-drafting and negotiation, considerations about peace operations, the council's recent actions on various issues, and members' positions and interests.

"Canada is deeply committed to working with our international partners and has been leveraging all opportunities to discuss how we can build a more peaceful, inclusive and sustainable world together," says a note on the council bid prepared last month for Foreign Affairs Minister Francois-Philippe Champagne.

By the end of October, Canada's campaign to win a seat had spent just under $2 million on operational expenditures. That does not include the salaries of 13 full-time employees assigned to work on the campaign in 2019-20.

"A campaign for a non-permanent seat on the UN requires time and resources," the note for Champagne says. "Canada is running a fiscally responsible campaign, which will allow us to strengthen our diplomatic ties in the process and advance other priorities."

They have both travelled to a number of countries to discuss shared priorities and to help advance Canada's bid, the note says.