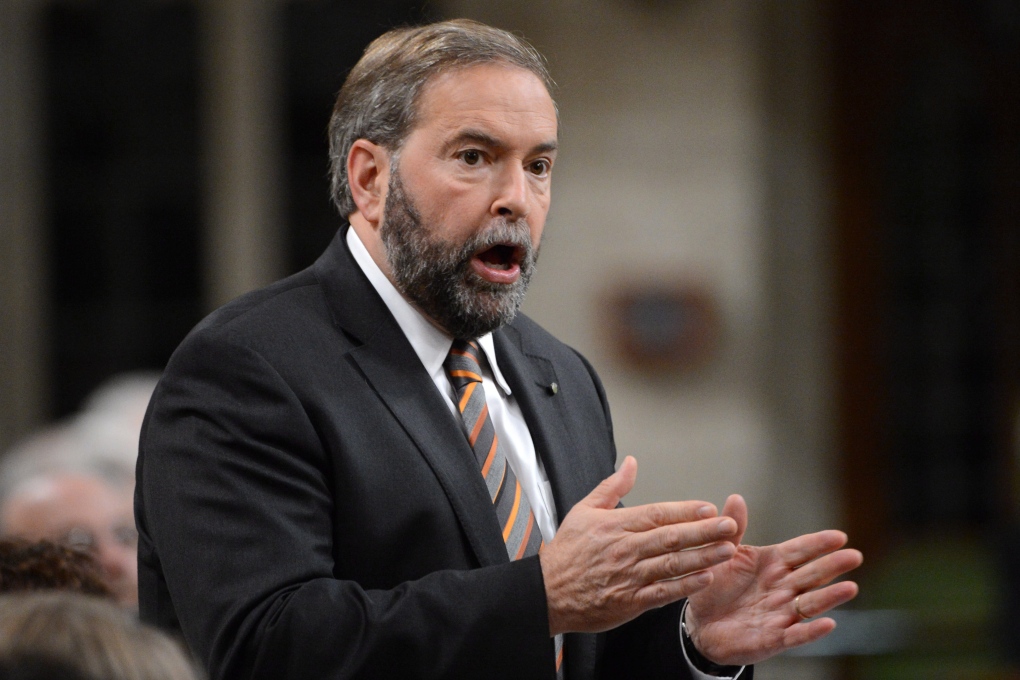 NDP Leader Tom Mulcair asks a question during Question Period in the House of Commons on Parliament Hill in Ottawa on Monday, October 22, 2012. (Sean Kilpatrick / THE CANADIAN PRESS)

It may seem an odd thing for the leader of a social democratic party to brag about.

But for the NDP leader, it's part of his mission to prove to Canadians that New Democrats aren't the wild-eyed, reckless taxers and spenders of lore.

Indeed, he maintains that's a more apt description of Harper's Conservatives, whom he accuses of racking up a huge environmental, economic and social debt that future generations will have to pay off.

"What's a paradox ... is that these are essentially conservative themes that I'm evoking in the sense that it would be very conservative to say, 'Don't look for a handout, be self-reliant, pull yourself up by your bootstraps, all that sort of stuff," Mulcair said in a year-end interview with The Canadian Press.

"But what the Conservatives are doing is living off the credit card of our grandchildren ... and I think that's wrong."

Mulcair still emphasizes traditional NDP issues: sustainable development and the need to reduce social inequalities. But he's framing them in conservative language, essentially arguing that intergenerational equity requires the current generation to carry its own weight.

"When we use a theme like that, the wording is almost conservative, right?" he said.

Mulcair's terminology reflects a frank political calculation that New Democrats must overcome lingering doubts about their economic management skills if they hope to realize their dream of forming government after the next election.

"We have to reach out beyond our traditional base," Mulcair said, explaining his strategy.

"If we want to form a government, we've got to, of course, convince our base that we can deliver on what have been long-standing policies and views. But we've also got to make Canadians understand that we're confident about our ability to deliver good, competent public administration.

"We're asking Canadians in the next election to do something they've never done before, which is to give the NDP the keys to the store, to say, 'Okay, we're going to trust you to run a very complex economy, a very complex public administration."

To that end, Mulcair has focused heavily on economic issues since taking the NDP helm last March. He estimated about 60 per cent of his interventions in question period each day have been devoted to the economy and jobs.

He's also adopted a more open posture on trade, supporting the only free trade deal -- with Jordan -- that's come up for ratification since he succeeded the late Jack Layton and urging expedited negotiations with Japan.

"So those are themes that we maybe didn't spend as much time on in the past as we do now and that's probably ... one of the biggest changes" under his leadership, he said.

The Conservatives, no slouches at framing their political rivals, have fought back by doubling down on charges that Mulcair is a typical anti-business, anti-trade, tax-and-spend socialist.

Tory backbenchers use their daily statements preceding question period to relentlessly hammer away at the NDP's proposed cap and trade system to reduce greenhouse gas emissions, labelling it a ruinous, $21-billion carbon "tax on everything" that would spoil Canadians' enjoyment of pretty much everything, including Halloween and Christmas.

Mulcair pointed out that Harper himself advocated a cap and trade system during the 2008 election, which the NDP leader calculates would have been more than twice as onerous as the one now championed by his party. For the Tories to now demonize the NDP plan as a tax on everything is "so disingenuous, it borders on foolish," he scoffed.

Mulcair predicted that the carbon tax attacks will backfire on the Conservatives.

"When they stand someone in the House to repeat the word carbon tax 27 times in a shrill voice, I think they're ridiculing themselves," he said.

"It reflects rather badly on them because it shows they're unable to have the substantive debate and, at some point, the average Canadian, being quite reasonable about these things, says, 'Well, why are they refusing to even discuss this?"'

The Tories have bolstered their anti-trade charges by pouncing on Mulcair's opposition to a proposed foreign investment agreement with China and to the takeover of Nexen Inc. by China's state-owned oil company.

But Mulcair makes no apologies in either front. He pointed out that Harper himself approved the Nexen deal only grudgingly and stressed any similar takeovers in future would be approved only under "exceptional circumstances."

As for the investment treaty, he said: "When you're dealing with a country that doesn't have the rule of law, that has, for all intents and purposes, no environmental norms ... and very few labour rights, you have to be very careful."

In recent days, the Tories have also begun poking at what they evidently perceive as another NDP weak spot: Mulcair's alleged volcanic temper. Mulcair declined to discuss his role in a recent verbal dust-up with the government's House leader, Peter Van Loan.

The Tories allege that Mulcair blew his top and swore at Van Loan, although video shows Van Loan initiated the contretemps, storming across the centre aisle in the Commons to confront Mulcair. Van Loan has apologized for using inappropriate language and called on Mulcair to do the same.

For the most part, however, Mulcair has not let any of the Tory attacks get under his skin; he's largely ignored them and stuck doggedly to his own agenda.

"You know, the worst signal that we could have ever sent them would be that threats could intimidate us. And I can guarantee you they've never had that signal from us," he said.

"They know that they're facing a very tough and structured official Opposition ... We won't back down."

Mulcair would not comment directly on the Liberal leadership contest but professed no concern about polls suggesting leadership front-runner Justin Trudeau could cut deeply into the NDP's support, particularly its newfound base in Quebec.

Novice New Democrat MPs from the province have settled in and started putting down roots, he said, boldly predicting: "We're going to do even better in the next election."

Moreover, Mulcair positioned himself as the champion of national unity, a title Liberals used to claim. He pointed out he's the only federal leader who actually fought in the trenches in both the 1980 and 1995 referendums on Quebec independence.

"There's nobody in that House who can claim to have fought as hard as I did in those referenda. While Stephen Harper was musing darkly on his couch, watching the news and talking about building firewalls (around Alberta), I was out there trying to build bridges."

Mulcair defended the NDP's controversial Sherbrooke Declaration -- which stipulates that a New Democrat government would consider a bare majority referendum vote sufficient to trigger negotiations on Quebec secession -- as part of that bridge-building effort.

However, he has added some conditions that aren't spelled out in Sherbrooke, namely that a 50 per cent plus one vote would be recognized only if the referendum question was clear and there were no irregularities in the vote.