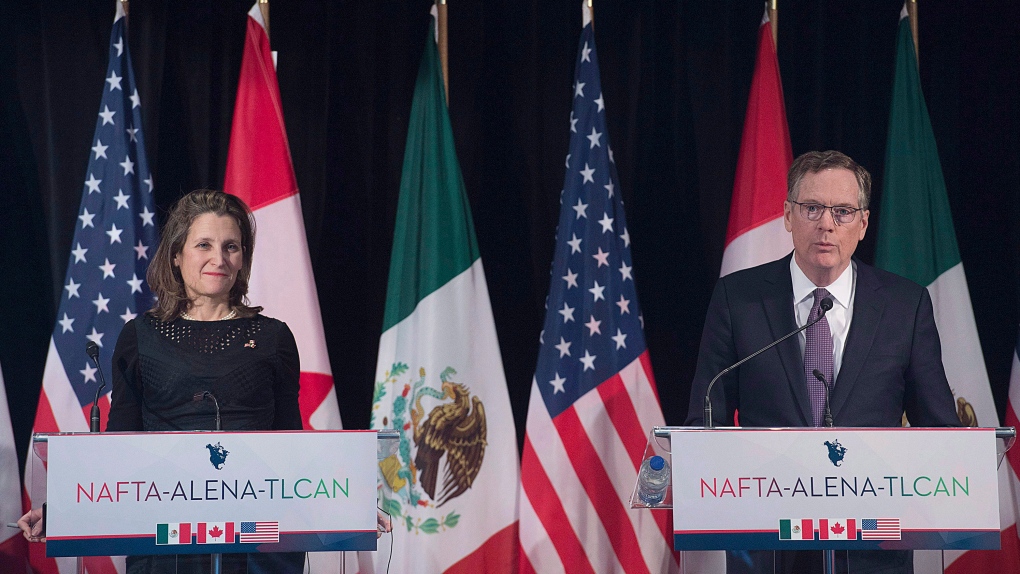 FILE -- Foreign Affairs Minister Chrystia Freeland looks on as United States Trade Representative Robert Lighthizer delivers his statement to the media during the sixth round of negotiations for a new North American Free Trade Agreement in Montreal, Monday, January 29, 2018. (THE CANADIAN PRESS/Graham Hughes)

OTTAWA -- Two days before Prime Minister Justin Trudeau's arrival at the Oval Office, U.S. trade czar Robert Lighthizer has pledged to work with Democrats to do whatever it takes to ratify the new North American free trade deal.

Lighthizer made the comments in testimony Tuesday before the U.S. Senate finance committee as part of the Trump administration's push to get the United States-Mexico-Canada Agreement ratified by a divided Congress.

Lighthizer's appearance on Capitol Hill comes as Trudeau prepares to meet President Donald Trump at the White House on Thursday to give impetus towards ratifying the deal. The leaders of Canada, the United States and Mexico signed the agreement last fall, but the election clocks in all three countries are ticking loudly towards looming political deadlines.

Oregon Sen. Ron Wyden, the ranking Democrat on the committee, said the new deal has "weak enforcement" provisions on raising labour standards in Mexico that he and his party want to fix.

Lighthizer said the USMCA has stronger enforcement provisions than the old North American Free Trade Agreement, including improved labour rights in Mexico, but he's open to making it stronger.

Mexico has passed a sweeping labour reform bill that raises wages and gives unions more power, changes that Canada and the U.S. both pushed for during NAFTA renegotiation, which were acrimonious at times.

The Trudeau government has said it is pleased with the Mexican reforms, but some U.S. Democrats say more needs to be done to prevent jobs, particularly in the auto sector, from continuing to move to Mexico where wages have been historically much lower.

In later testimony, Lighthizer said he was not endorsing the Wyden-Brown plan -- or any other -- but throughout his two-hour-plus appearance, he made clear he wants to work constructively across his country's partisan divide to get the USMCA approved.

He offered what amounted to a gracious account of his dealings with Democratic House Speaker Nancy Pelosi, who holds the key to getting any ratification bill introduced in the lower house of Congress -- the necessary first step towards final U.S. legal approval of the pact.

Trump has called Pelosi "Crazy Nancy" and recently said Democratic delays in Congress were in part because she can't understand the complicated deal.

"The speaker (Pelosi) has been completely fair and above board and, I think, constructive," Lighthizer said.

"I believe we're on track. I think we're making progress, and I'm hopeful on that score. And the speaker has been absolutely, as far as I'm concerned, exactly as you would hope she would be."

Some Canadian business leaders are urging Trudeau to meet with Pelosi because she essentially holds the cards in the getting a ratification bill introduced on the floor of the House.

Trudeau introduced Canada's ratification bill last month and it is winding its way through the House of Commons, which is due to adjourn by Friday for the last time before the October federal election. It is possible for the government to recall MPs in the summer to deal with ratification. Foreign Affairs Minister Chrystia Freeland was non-committal about that option during her own visit to Washington last week, which included a meeting with Lighthizer.

Freeland reiterated the government's position that it wants to move towards ratification "in tandem" as much as possible with the U.S., but said the Liberals were also taking a "Goldilocks" approach that entailed not wanting to move too fast, or too slow.

Trudeau's face-to-face meeting with Trump in the Oval Office is being billed as an opportunity to highlight the importance of moving forward with the new trade deal.

Congress faces its own summer deadline as it heads towards an August recess. After that, many observers question whether U.S. lawmakers will be able to move forward with the marathon campaign for the 2020 presidential election all but under way by then.

The Mexican Senate, meanwhile, is poised to ratify the new agreement in the coming days. It is considering the bill in a special session after it was due to adjourn earlier this spring.