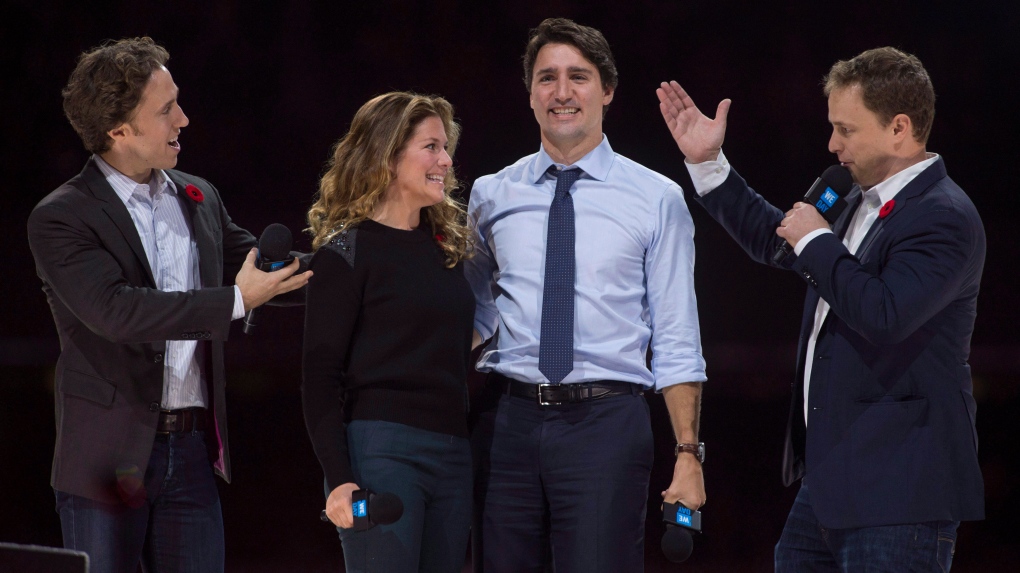 Co-founders Craig (left) and Marc Kielburger introduce Prime Minister Justin Trudeau and his wife Sophie Gregoire-Trudeau as they appear at the WE Day celebrations in Ottawa, Tuesday November 10, 2015. THE CANADIAN PRESS/Adrian Wyld

OTTAWA -- WE Charity co-founders Craig and Marc Kielburger are declining requests to testify before two House of Commons committees.

In a statement Wednesday, the charity noted that New Democrat MP Charlie Angus has requested that the RCMP and the Canada Revenue Agency investigate WE's operations.

The charity said it would be unfair to subject it to a partisan committee investigation at the same time.

"While WE Charity would welcome and co-operate with any potential investigation conducted by these agencies (RCMP and CRA), no organization should be subject to both an investigation of the same matters by a partisan parliamentary committee which wishes to carry out its own substitute investigation," the charity said.

Both the Commons ethics committee and procedure and House affairs committee have invited the Kielburger brothers to testify as part of their ongoing scrutiny of a federal agreement to have WE manage a now-cancelled student services grant program, despite the organization's close ties to Prime Minister Justin Trudeau and his family.

Ethics commissioner Mario Dion is investigating the involvement of Trudeau and former finance minister Bill Morneau, who also has family ties to WE, in awarding the $43.5-million contract. Both have apologized for not recusing themselves from the decision.

Angus requested the RCMP and CRA investigations last week after a former donor, U.S. television journalist Reed Cowan, alleged that the plaque on a school he had funded in Kenya had been replaced with a plaque in the name of another donor.

WE said the incident was an unfortunate mistake; Angus called it proof of a "pattern of duplicitous relations with donors."

Angus said Wednesday that he will confer with his fellow committee members about summoning the Kielburgers to testify.

Conservative ethics critic Michael Barrett also tweeted Wednesday that his party will pursue a summons "in the interest of accountability to Canadians."

"I'm very, very perplexed that they're taking this strategy," Angus said in an interview.

Angus noted that the committee has already had to summon two other executives in the WE organization, to compel them to testify. A summons from a Commons committee has legal force.

Cowan made the allegations during testimony last Friday to the Commons ethics committee, which invited the Kielburger brothers to testify on Monday.

The brothers have already testified for four hours at the Commons finance committee last summer, after controversy over the student-grant program erupted.

In its statement Wednesday, WE Charity notes that five members of the organization have testified at various "highly partisan" committees over the past nine months and will decline further invitations to do so again.

It says it will continue to co-operate with the ethics commissioner's investigation.

The charity also says its board of directors is setting up a standing committee on donor transparency to look into "any specific concerns that may be raised by any past, present or future donor."

Its first priority will be to look into Cowan's allegations, the charity says.

Cowan, who has called on the U.S. Internal Revenue Service to also investigate the matter, said Wednesday that he puts "more faith and trust in tax investigators on both sides of the border and in the FBI than I do any in-house committee that could be set up by the very organization in question."

Cowan had raised money for the Kenyan school in the name of his late son, Wesley, who died in an accident at four years old.

WE Charity "let me use my good name and my son's death to get money for them from so many people, " Cowan said in an email Wednesday, adding that he wants all the money he and others donated in his son's name to be returned.

He said his testimony at committee last week has "shaken loose" information from people who are bound by non-disclosure agreements with the charity. The volume of calls he's received from such people "should concern anyone who gave money, clout and power to this organization," he added.

The latest WE controversy has taken an emotional toll on Cowan. He said he's seeking professional help to get through the post-traumatic stress disorder triggered by his testimony.

"I thought I could be Superman but by this morning this has driven me into a dark abyss and I'm putting my faith in people to carry the questions to answers that are due donors all over the world."

WE Charity said that when donors contribute to the projects such as building a school, "those funds are often pooled to help villages, as is common with other major international development organizations."

It says it has sought to be clear about that approach through its websites and other materials and added that "every penny donated to WE Charity was used to help children."