Get on with promised gun-control measures, advocates urge Trudeau government 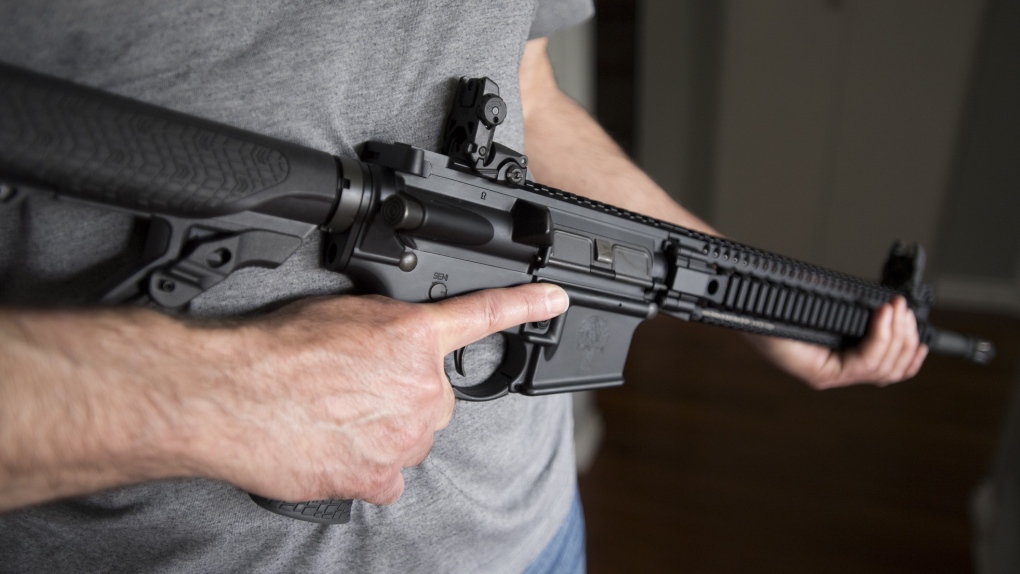 A restricted gun licence holder holds a AR-15 at his home in Langley, B.C. on May 1, 2020. (THE CANADIAN PRESS/Jonathan Hayward)

OTTAWA -- Advocates of stricter gun control are urging the Trudeau government to get on with promised reforms, saying they are months overdue.

Heidi Rathjen, coordinator of the group PolySeSouvient, told an online news conference Monday that several months later there are no signs of progress on legislation.

"We urge minister Blair to return to the gun file with force and to aim to meet his commitments without delay."

The plea came days before the Dec. 6 anniversary of the shootings of 14 women at Montreal's Ecole Polytechnique, which Rathjen witnessed as a student.

The federal government outlawed a wide range of firearms by cabinet order in May, including the one used at Polytechnique, saying the guns were designed for the battlefield, not hunting or sport shooting.

The ban covers some 1,500 models and variants of what the government considers assault-style weapons, meaning they can no longer be legally used, sold or imported.

The measure has met with stiff criticism from some firearms owners and the federal Conservatives, who question the value of the ban.

Blair has promised to follow the move with legislative changes to further tighten restrictions on firearms.

"There is more to do, and we're committed to doing it," Blair's spokeswoman, Mary-Liz Power, said Monday. "We will introduce legislation designed to deliver on the promises that we made to Canadians in the last election."

PolySeSouvient wants to see the new prohibitions on assault-style guns, brought in through regulation, embedded into law to complete the ban and render it permanent -- something the Liberal government has signalled it will do.

It also wants the Liberals to legislate a system of pre-authorization for guns to ensure only new models inspected and authorized by the RCMP can enter the Canadian market.

Blair has said the coming legislation will create a new evergreen framework for classification of firearms to ensure federal intentions can't be easily overridden.

But also on Monday, Blair announced a three-year delay in setting regulations for "marking" guns so they can be traced to registered owners if they're seized in connection with crimes. Those rules were due to kick in Tuesday after years of previous delays.

His department said that without clear record-keeping requirements for some guns, it isn't sure how to to connect markings to owners. But it said it's committed to a marking system nonetheless, if not right away.

"The government will not reintroduce the long-gun registry," the announcement concluded.

Eyeing the next wave of federal legislation, PolySeSouvient also wants the government to:

-- Limit firearm magazines to five bullets to reduce the damage a mass shooter can do;

-- Invest significant efforts and resources in strengthening the screening and monitoring of gun-licence applicants and licensed owners;

-- End the importation and manufacture of handguns.

The Trudeau government plans to empower provinces and cities to take steps to manage the storage and use of handguns within their individual jurisdictions, given that they have different needs and concerns.

PolySeSouvient has counselled the government to avoid off-loading handgun restrictions onto municipalities, saying local bans are generally ineffective, as the patchwork of local and state laws in the United States shows.

According to the RCMP the number of restricted firearms -- predominantly handguns -- registered to individuals or businesses rose to 1,057,418 last year from 983,792 in 2018.

Claire Smith and Ken Price, whose daughter survived a Toronto shooting in July 2018, pressed Monday for a ban on the private ownership of handguns.

"It's been over two years since our daughter was shot," Price said during the news conference. "And from our perspective, there has been zero legislative progress on handguns and the situation keeps getting worse."