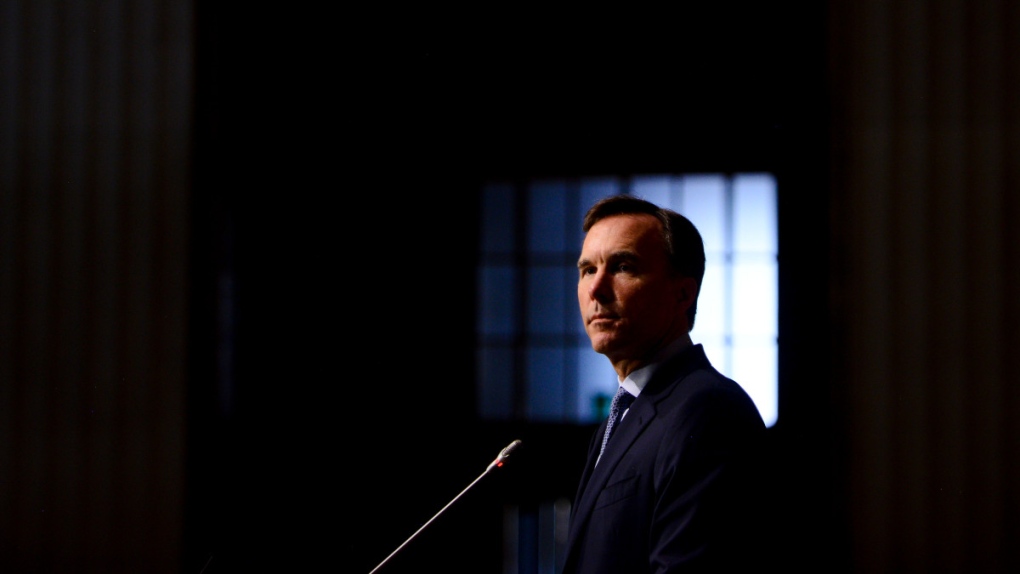 OTTAWA -- Former finance minister Bill Morneau has dropped out of the race to become secretary-general of the Organization for Economic Co-operation and Development.

In a statement posted on Twitter Tuesday, Morneau said he did not have enough support from member countries to make it to the third round of the campaign.

Morneau, who became Trudeau's finance minister after the Liberals won the 2015 election, abruptly resigned from cabinet and as the MP for Toronto Centre last August.

At the time, he said he would put his name forward as a candidate to succeed Angel Gurria as the next secretary-general of the OECD.

But he was also facing opposition calls for his resignation over allegations that he had a conflict of interest in the WE Charity affair after he revealed the organization had paid for two trips he and his family took to Kenya and Ecuador in 2017.

The federal ethics watchdog has cleared Morneau of failing to disclose a gift from WE Charity. But Mario Dion continues to probe whether Morneau and Prime Minister Justin Trudeau, who also has close family ties to WE, breached the Conflict of Interest Act by failing to recuse themselves from the cabinet decision to pay the charity $43.5 million to manage a since-cancelled student services grant program.

Dion's office would not speculate Tuesday on when the ethics commissioner might deliver his verdict.

"Both examinations are ongoing and Commissioner Dion will report on them once they have been completed," it said.

"There is no timeline for when his reports will be released. Our office conducts investigations thoroughly and with a high degree of diligence, and we make the reports public as quickly as possible."

Foreign Affairs Minister Marc Garneau said the government is disappointed that Morneau did not have enough support to continue in the race to head the OECD.

"We felt that Bill Morneau was the ideal candidate for the job in these difficult times," Garneau said in French in the House of Commons, thanking the former minister for his "dedication" and his work on improving Canadians' quality of life.

"Although this isn't the outcome we'd hoped for, we will be working with the next secretary-general for the OECD, who will be chosen by its members."

In his statement, Morneau said he is "proud to have used this opportunity to talk about issues that matter to Canadians and to the world -- the recovery from the COVID-19 pandemic, the fight against climate change, inclusive growth and seizing the opportunities of the digital world."

The government disclosed in November that 19 public servants at Global Affairs Canada were working part-time on Morneau's OECD campaign.

In a written response to a question from Conservative MP Corey Tochor, the department said it could not estimate how much the government would spend to provide "diplomatic support, advocacy and strategic advice to advance Mr. Morneau's candidacy."

To that date, it had spent $6,265.76 in hospitality costs as part of an effort to reach out to OECD member delegates and other organization representatives in Paris.

"These expenses reflect standard diplomatic practices, including for such selection processes," the department said.

This report by The Canadian Press was first published Jan. 26, 2021.