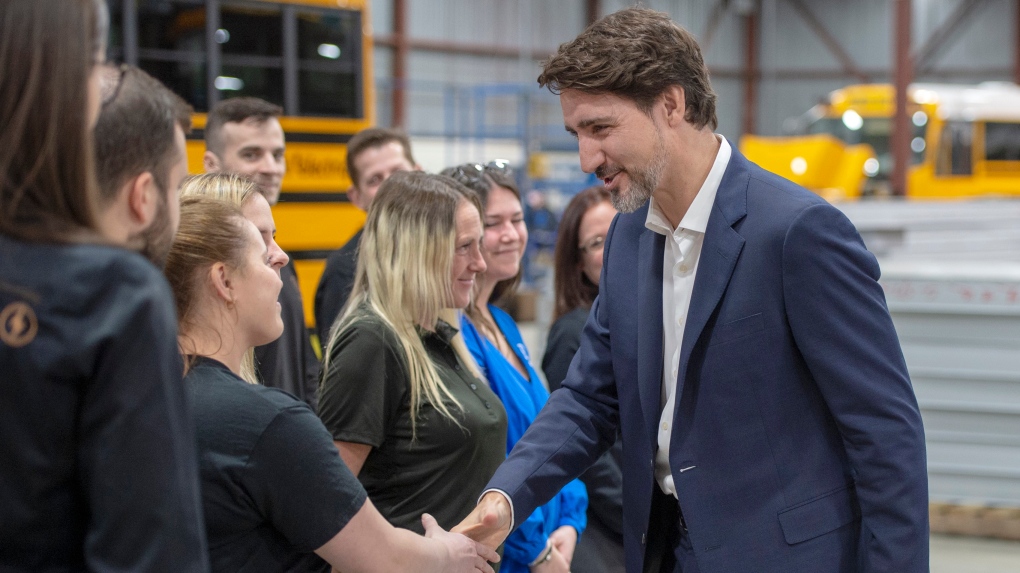 OTTAWA --  "We cut taxes for the middle class. It was the first thing we did as a government in 2015, and it helped to lift more than one million Canadians out of poverty. And that's exactly why we did it again in 2019." -- Prime Minister Justin Trudeau in tweet Feb. 29, 2020.

Statistics Canada published new data earlier this month showing Canada's poverty rate declined to a new low in 2018 and the number of low-income Canadians fell by more than one million over three years.

But were these people lifted out of poverty as a result of the Liberal government's 2015 tax measure?

The Canadian Press Baloney Meter is an examination of political statements culminating in a ranking of accuracy on a scale of "no baloney" to "full of baloney." This one earns a rating of "a lot of baloney": The assertion is the statement is mostly inaccurate but contains elements of truth.

The Liberals came to power in 2015 with a campaign pledge for a middle-class tax cut, a reduction they planned to pay for by raising taxes on the wealthiest Canadians.

In 2019, the Liberals introduced a further tax measure, selling it as a help for low- and middle-income earners. That more recent move, which took effect Jan. 1 and is to be phased in over four years, increases the amount someone can earn before federal taxes kick in, lifting the amount ultimately to $15,000 from $12,300.

David Macdonald, a senior economist with the Canadian Centre for Policy Alternatives, says the Liberals' 2015 tax cut itself was not responsible for lowering Canada's poverty rate.

He agrees that over a million people were lifted out of poverty between 2015 and 2018 using the "market basket measure," which calculates the minimum a person or family has to bring in to afford a modest or basic living standard. The Liberals adopted this measure as the country's official poverty line in 2018.

But Macdonald says the primary driver of the decrease in the poverty rate was the introduction of the Canada Child Benefit in 2016 as well as other changes to income-transfer programs, including the guaranteed income supplement and the Canada Workers Benefit.

"It is certainly true that public policy is responsible for a million fewer people living in poverty today versus 2015, but it's not due to tax cuts, it's due to changes in transfer programs," Macdonald said.

"The Liberals can certainly take credit for it: they made the changes and those have had a big impact on people's lives. It just wasn't tax cuts."

Macdonald further notes the 2015 tax changes introduced by the Liberals were not actually targeted at the middle class, but rather the middle tax bracket.

Canadians who made more than $45,000 that year benefited somewhat from this tax cut, but only those making over $90,000 saw the full benefit of the Liberal "middle-class tax cut."

In other words, only higher-income earners got the most out of this measure.

Stephen Gordon, an economist at Laval University, says he has long taken issue with the Liberals' calling the 2015 tax reduction a "middle-class tax cut."

The move only helped those who made more than $45,000 in taxable income -- after all deductions -- the year it was implemented.

"It's a stretch to say it was a tax cut that benefited the middle class," Gordon said.

Both Gordon and Macdonald point out that those whose annual incomes are close to the poverty line, which is around $20,000, saw no benefit at all from this measure.

"Most people that live at or near the poverty line already have enough deductions so that they don't pay income tax anyway, so none of these changes in the tax brackets would have affected them."

The 2019 tax changes that took effect this year -- raising the basic personal exemption -- do offer a little more tax relief for middle-income earners, both economists agree. However, they note that this only helps those who are paying income taxes.

"People living in poverty don't pay income tax, they don't have enough money. You're not going to do much for poverty with an income-tax cut," Gordon says.

A spokesperson for Finance Minister Bill Morneau said the 2015 tax cut was one measure among several that contributed to the measured poverty reduction over three years.

"Thanks to programs like the Canada Child Benefit, the increase to Guaranteed Income Supplement, Canadian Worker benefit and the Middle Class Tax Cut, Canadians have more money in their pockets. Under this plan, more than one million Canadians were lifted out of poverty between 2015 and 2018," Maeva Proteau wrote in an email that described each measure and the further tax cut in 2019.

"Our plan is working," she concluded. "Incomes are up for the middle class and those working hard to join it, and poverty is at the lowest level on record."

Listing the tax cut among other measures that contributed directly to reducing poverty doesn't mean the tax cut reduced poverty. The experts say poverty is down markedly and Liberal policies have been a significant factor, but a tax cut for people making more than $45,000 a year doesn't deserve the credit.

For these reasons, Justin Trudeau's statement earns a rating of "a lot of baloney."

This report by The Canadian Press was first published March 5, 2020.