Don Martin: The faces of the future in Canadian politics 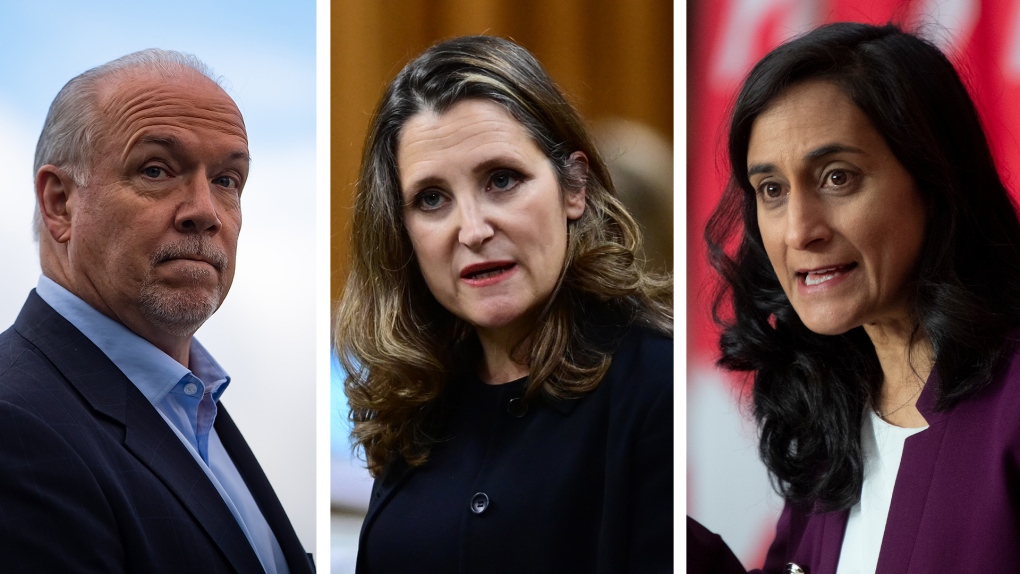 OTTAWA -- Let’s call them the Super Six, a half dozen names who, based on solid, stable and surprising performances this year, will likely become or remain powerhouses of the realm in the years ahead.

In a year spent fighting an invisible enemy with plenty of sudden change in political fortunes, they all seem well-positioned to be front-and-centre players well into the 2020s.

In no particular order, my top six watch-worthy political figures are:

Chrystia Freeland. The deputy prime minister probably finds the first-woman-as-finance-minister title she was given this fall as more distraction than distinction, but she is uniquely positioned as a powerful Trudeau cabinet force behind the scenes and in front of the cameras. Her spending-booster fiscal update was reasonably well received, albeit a document that has deficits surging as far as forecasters can see.  Then again, it’s not easy having a boss who shrugs off deficits as an inconvenient truth of governing. To keep him happy, she promised a $100-billion recovery fund, guard-railed by enough conditions to suggest it will never be spent. Her quiet diplomacy with premiers as COVID-19 programs rolled out produced an unexpected love-in with Ontario Premier Doug Ford and few signs of tension with the other premiers. Her U.S. headache continued as Canada found itself working with a desperate and volatile windbag of presidential nitroglycerin. But she knocked back a Donald Trump threat to re-impose tariffs and took the stage to gently gloat at the victory - with Trudeau nowhere in sight. Clearly, she’s the Next One.

Anita Anand: Never heard of her? Well, the Public Services and Procurement Minister is responsible for getting you that shot in the arm this year or next. Either by luck or keen foresight, the rookie MP lined up more vaccines per capita than any other country in the world and has co-ordinated distribution to deliver the life-saving shot as soon as it was approved. She took early hits for the scramble to get PPE lined up, but she secured 157 million masks within a month of the pandemic being declared, no easy feat given unfriendly China is the manufacturing epicentre for the equipment. Rarely, if ever, has a rookie faced and finessed such a pivotal life-saving assignment.

John Horgan: The NDP B.C. premier is on this list for one main reason: He made the smart political calculation to call an election in the middle of a pandemic just ahead of a return COVID-19 surge which would have complicated a later re-election campaign. And he won. A big majority. Ok, he gets bonus marks for letting the medical professionals, namely smooth-talking chief medical officer Bonnie Henry, handle the COVID-coping details while he muses about non-essential flying shutdowns. But by rolling the dice a year early, he now commands four years of unassailable rule with double the seats of the Liberals - minus the nuisance of having Green Party partners to keep happy.

Wonder Women 2020:  Ok, so they’re not politicians in the sense of having won the title electorally. But chief medical health officers Bonnie Henry of B.C. and Deena Hinshaw of Alberta influenced political decision-making more this year than all but a few federal cabinet ministers. While the COVID-19 numbers in their respective provinces are hardly stellar, their advice is being heeded by premiers (albeit belatedly in the case of Premier Jason Kenney) even more in the second wave than the first. But their true gift, above all others in the provincial or federal realm, is exemplary communications. Their briefings are a reassuring mix of accurate information, candid analysis and hope delivered with an empathetic understanding of the bewildered helplessness the average Canadian is feeling these days. They didn’t solve the riddle of stopping this evil virus, but they made some harsh medicine go down easier.

The Next Ones: Two names entered the political fray this year showing considerable potential to become the next big thing in their respective parties. Trade lawyer Leslyn Lewis was considered the longest of shots when she entered the Conservative leadership with anti-abortion views. But she campaigned in the mainstream and actually won the second ballot vote, finishing ahead of winner Erin O’Toole in all four western provinces. A Black woman lawyer from Saskatchewan as the next Official Opposition leader? Don’t be surprised.

And then there’s the eye-catching victory of Annamie Paul as Green Party leader, the first Black Canadian to run a federal party. While it’s difficult to think of the Greens as anything but an Elizabeth May movement, perhaps we should think again. Betting is she will win a seat in the next election and then the Liberal-NDP axis should beware - this calm, coherent and politically astute lawyer is not going to leave the party on the tree-hugging fringes for long.