Don Martin: Canada's 150th birthday is a weekend for celebration 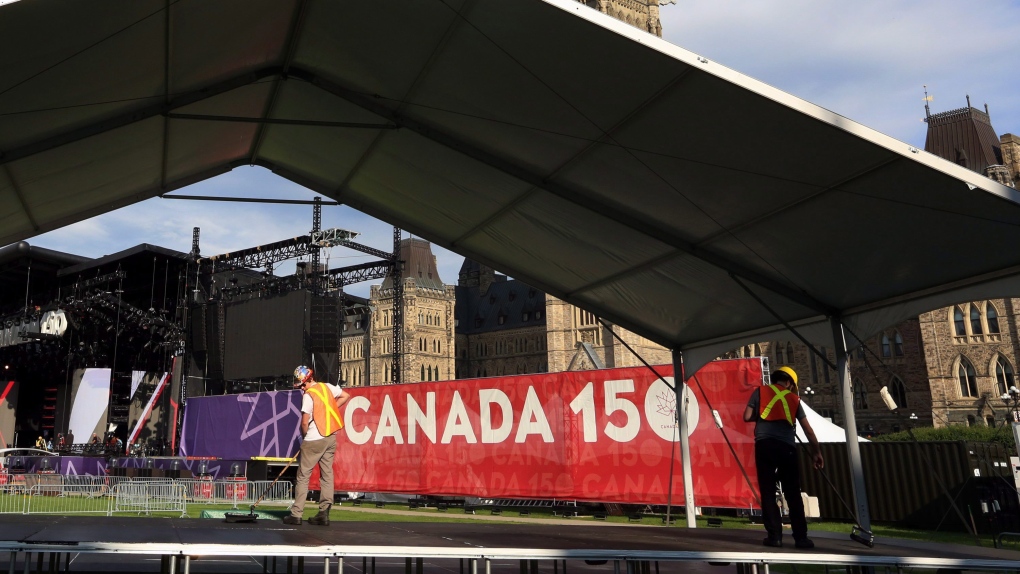 Workers prepare a stage on Parliament Hill, in preparation of the upcoming Canada Day celebrations, in Ottawa on Wednesday, June 28, 2017. (Fred Chartrand / THE CANADIAN PRESS)

If there’s a signature Canadian character trait, it’s saying sorry all the time.

We are a nation of apologists, be it just bumping into a stranger on the elevator to groveling forgiveness for scandals dating back generations.

Even on the eve of our 150th birthday, some feel guilty at marking Canada's official birth when our country was occupied by indigenous peoples long before Confederation.

But surely this weekend is a time for Canadian celebration, not recrimination.

What’s not to celebrate is a greater challenge than what we should salute about ourselves. But let me count the ways Canada’s reflection should loom large in our own mirror.

Our Canadian values are self-evident, which don’t need to be tested at the border.

We’re in a country where same-sex relationships are so normalized, a gay federal cabinet minister and his spouse are raising young twins – and nobody bats an eyelash.

We’re a country where First Nations like the Osoyoos band can produce some of Canada’s best wines on a prosperous B.C. reserve with zero unemployment.

We’re a nation a year away from legalizing a recreational drug responsible for tens of thousands of missed career opportunities or turnarounds at the U.S. border because of a simple marijuana possession record.

Our legal guns are under lock and key and backed by police-checked licensing, not openly carried or concealed after being bought in a single day at a local gun shop.

Our soldiers are staring down the Russian bear on its eastern border AND helping in the fight against ISIS, one long-range sniper hit at a time.

We boast universal health care, albeit imperfectly delivered, where coverage is a sacred trust that isn’t subject to whimsical change after every election.

For those suffering intolerable life-ending pain, we have the right to ask for a doctor’s help to die with dignity.

Our best poet singer is named Leonard Cohen and he was far more Nobel Prize-worthy that the guy whose lyrics were blowing in the wind.

Our political leaders exaggerate and deploy selective truths, but we still call them out, even for little white lies.

Perhaps it’s an inconvenient truth, but we have unleashed an oilsands motherlode which has been an engine of growth right across the country for decades.

Our kids can proudly roam the world with the Maple Leaf on their backpack without being hassled.

And, yes, we can claim ketchup-flavored chips as a signature culinary discovery and have a waistline-expanding fetish for donuts.

We are Canadian eh? And for that, there’s no reason to ever apologize.

Happy 150th to the greatest country in the world.