Don Martin's best and worst performers of the Trudeau cabinet 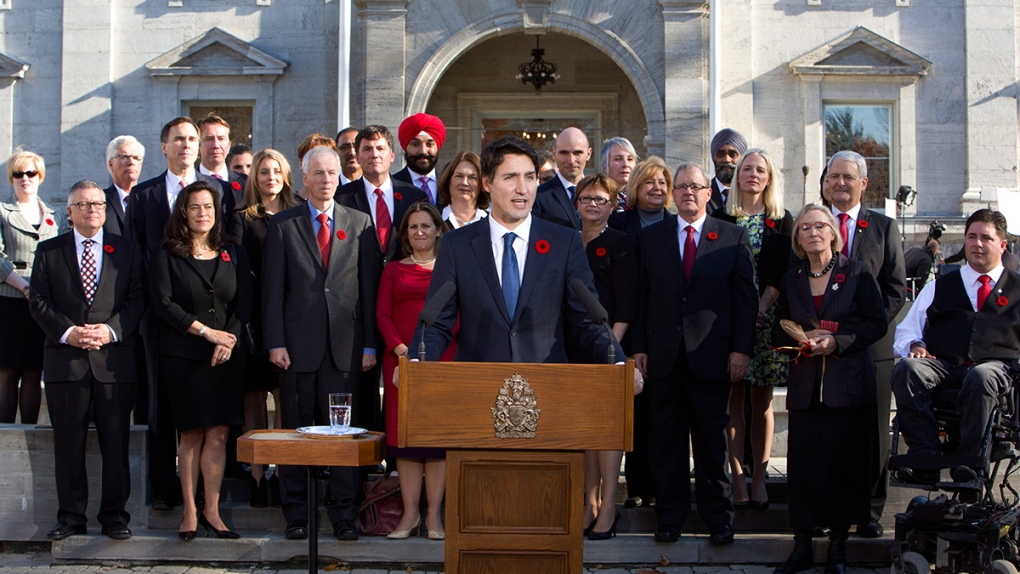 Prime Minister Justin Trudeau holds a news conference with his cabinet after they were sworn-in at Rideau Hall, the official residence of Governor General David Johnston, in Ottawa, Wednesday, Nov. 4, 2015. (Fred Chartrand / THE CANADIAN PRESS)

The Prime Minister will be releasing report cards on his own cabinet ministers next month.

The unprecedented release of ministerial mandate letters will be followed by the first release of progress reports this summer.

And with a cabinet shuffle allegedly on the horizon, delivering or faltering on those marching orders could set in motion ministerial promotions or demotions.

This explains the mad dash to unveil security legislation, foreign policy and the defense strategy this month as ministers scrambled to fill in the blanks on their mandate mid-terms.

But, because the overall results won’t be out until late July at the earliest, here are a sample of the best and worst performances, in my opinion.

Public Safety Minister Ralph Goodale has, at times, felt undervalued by the PMO, but when his experience is tested by tragedy or terrorism, he delivers a calm, competent response. The gulping goldfish opposition reaction to his new national security bill testifies he got in right in this key bill. Grade: A

Foreign Affairs Minister Chrystia Freeland is a close second at the top of the class. Despite her irritating tendency to boast of everything as her personal accomplishment, she has done well on trade talks and delivered a maestro performance in conducting the Trump administration with just the right amount of pushback in tone. Grade: A-

Finance Minister Bill Morneau is struggling. His deficit-bloated budget was so blasé, it triggered instant voter amnesia about the contents. His ability to communicate a coherent fiscal future is marginal and there’s been a run on the credibility of his signature infrastructure bank. Grade: C

House Leader Bardish Chagger is air traffic controller in the Commons with plenty of crash landings on her watch. The plodding pace of legislative progress, the animosity she’s incurred from her opposition counterparts and her blunder in handling Senate amendments on the budget bill proves this is no job for parliamentary beginners. The PMO should save her with a shuffle before September. Grade: D-

National Defence Minister Harjit Sajjan got a late save from low grades for unveiling a defence policy which targets most of the military’s chronic shortfalls. But the source of the money is still a mystery, which puts a question mark beside the architect of this armed forces revival. Grade: C+

And, finally, there’s the guy who won’t get a mandate letter progress report until voters give him a pass or fail in 2019.

Justin Trudeau continues to deliver plenty of style, but he’s not without legislative substance and Harperesque ruthlessness when provoked. His global outreach is impressive, particularly his ability not to inflame U.S. President Donald Trump. But his government’s spending curve is truly alarming and there are billions promised that are not adequately accounted for in the budget. The challenge for Trudeau in the second half of the mandate is to turn great gobs of time-wasting consultation, hesitant appointing and rhetoric-filled frameworks for discussion into tangible government accomplishment. No easy task. Grade: B

And that, until the progress reports come down, is The Last Word.