Don Martin: On the great pipeline divide, PM Trudeau must pick a side 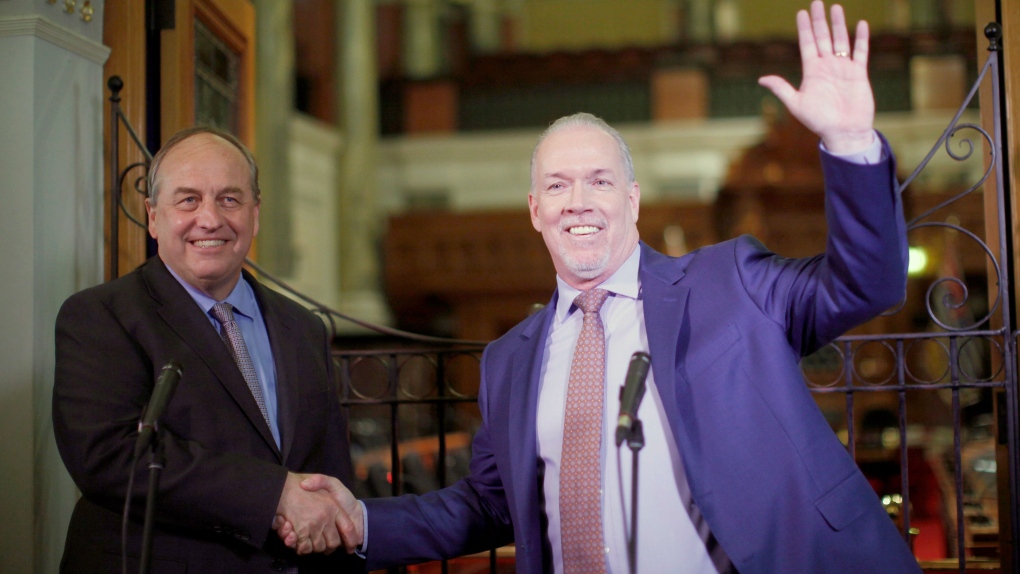 B.C. Green Party Leader Andrew Weaver and B.C. NDP Leader John Horgan speak to media after announcing they'll be working together to help form a minority government during a press conference at Legislature in Victoria, B.C., on Monday, May 29, 2017. (Chad Hipolito / THE CANADIAN PRESS)

The Great Divide is a towering mountain range which also serves as the southern boundary between British Columbia and Alberta.

A raindrop landing on the eastern face flows to the Atlantic or Arctic oceans. If it lands a few metres west, it runs to the Pacific.

The political drama flaring in western Canada this week is a new vow to block Alberta bitumen being pipelined west over the Divide to reach the Pacific for tanker export to new markets.

That might run counter to geology, but it is essential economically.

The alternative is to leave an energy motherlode confined to high-volume export south to a fickle U.S. market, which pays a discount for the product, provided it has refining capability to spare.

Alberta’s crucial safety release is the expanded Kinder Morgan pipeline - and it was coming together nicely until a two-headed monster came to life this week.

The new B.C. alliance of NDP and Green parties with their pipeline-blocking treaty is now the biggest threat to national harmony, if not unity, in 20 years.

Alberta is correct to furiously argue B.C. cannot be a national gatekeeper, arbitrarily deciding which resources are worthy of reaching tidewater.

If the delivery mechanism is safe, part of being a Canadian province is the right to allow domestic resources and products to flow without impediment.

Unless Prime Minister Trudeau is swayed by petty political considerations, he will continue to insist Kinder Morgan is in the national interest, which gives him the constitutional obligation to push the pipeline through.

The problem is that building and development permits are a provincial responsibility – and they can be deployed to delay or deny construction indefinitely with Alberta bitumen held hostage in the ground.

At some point soon, Trudeau needs to assert his authority aggressively. It won’t be a sunny-ways-scenario.

After all, this much is becoming clear.

Coupled with Quebec’s new push to reopen the Constitution, Canada’s 150th birthday is shaping up as a year of interprovincial conflict.

But when it comes to the fate of Kinder Morgan, there’s really no choice.

One position is an economic necessity. The other is a negotiating item on the treaty to acquire shared political power.

If the federal government is forced to land on one side of this great political divide, well, it’s the economy, stupid.