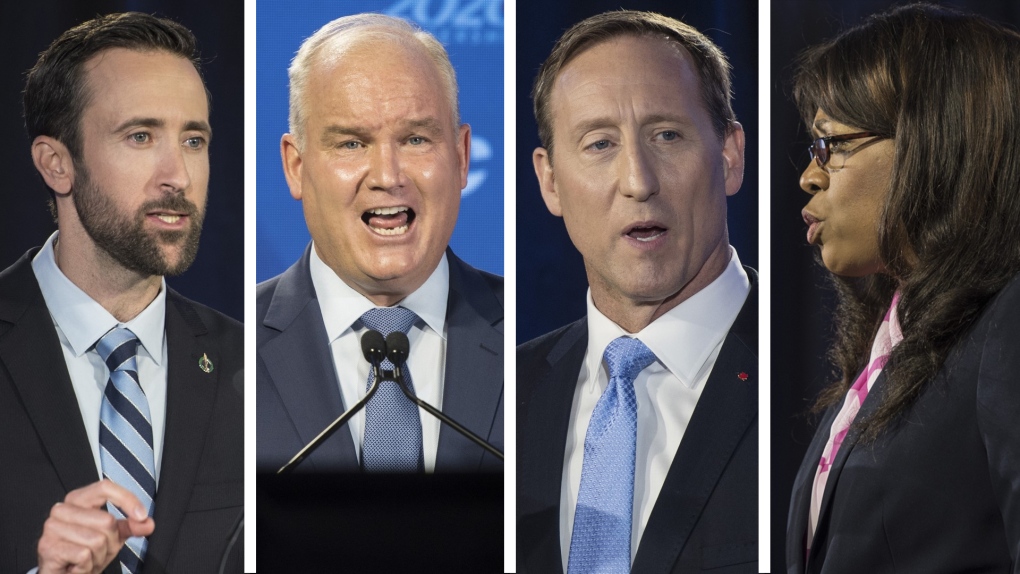 OTTAWA -- A failure to clearly articulate positions on social conservative issues and a weak climate change plan are often cited as reasons the federal Conservatives failed to woo enough voters to win the last federal election.

The party's most ardent supporters, many of them more likely to cast a ballot in the ongoing leadership race, include staunch social conservatives and fierce opponents of carbon taxes.

So the party faces a dilemma: if they were to more firmly commit not to reopen the abortion debate, and put out a more definitive plan for reducing greenhouse gas emissions, would it grow or diminish its support?

A new poll suggests the answer to that question is complicated.

Among voters who intend to vote Conservative in the next election, 31 per cent say they'd be more likely to consider it if the party took a firmer stand on ending the debate. Seventeen per cent would be less likely to do, and 38 per cent say it wouldn't change their mind either way.

The survey also explored whether voters could be persuaded if the party had a comprehensive plan to reduce greenhouse gas emissions.

As a whole, 32 per cent of those surveyed may be more likely to vote Conservative, 11 per cent would be less likely and it would not sway 44 per cent one way or the other.

The online poll of 1,521 adult Canadians was conducted June 19 to 21 and cannot be assigned a margin of error because internet-based polls are not considered random samples.

That was right after the four leadership candidates faced off in a pair of back-to-back debates, where both abortion and climate change were key issues.

With all suggesting they are best placed to challenge the Liberals, where do they stand?

Peter MacKay supports abortion rights. He had previously said he wouldn't allow his cabinet to vote in favour of any bills restricting abortion. More recently, he said while he hopes all MPs will adhere to official party policy that a Conservative government wouldn't reopen the debate, he would allow free votes on conscience issues.

Erin O'Toole said during the recent leadership debate he is "pro-choice," and believes it is a woman's right to have an abortion. He has said MPs can bring forward whatever bills they like, and MPs will be able to vote their conscience.

Derek Sloan has a 12-point "pro-life plan." At number one: a pledge to try to get the official party policy on not introducing laws to limit abortion repealed. He also promises to introduce legislation that could see people charged for harming two people if they harm a pregnant woman -- the woman and the fetus.

While all four candidates have spoken about their respective positions on the environment -- and none support broad carbon taxes -- their platforms containing varying levels of details on the question of how, if at all, they'd work to reduce greenhouse gas emissions.

Lewis: Her platform bundles together promises for "responsible" resource development, encouraging green investments and renovations and funding conservationist practices. With regards to emissions, she says she'd encourage businesses to lower them.

MacKay: His platform lists five ways he says he will bring down emissions: replace coal in Canada and globally, invest in carbon sequestration, "achieving advances in technology," increased conservation efforts, and meaningful consultation.

O'Toole: He devotes three pages of his 50-page platform to the environment and climate change. On emissions specifically, it includes getting the oil and gas sector to net-zero by incentivizing the use of technology, and promises Canada would help lower global emissions by, among other things, exporting nuclear technology and helping countries get off coal.

Sloan: He says he'd pull Canada out of the Paris climate agreement, which sets the goal of reducing emissions by 30 per cent below 2005 levels by 2030. His listed policies to date are silent on climate change.

This report by The Canadian Press was first published June 27, 2020.