Canadian troops will leave Iraq if government orders it: Sajjan 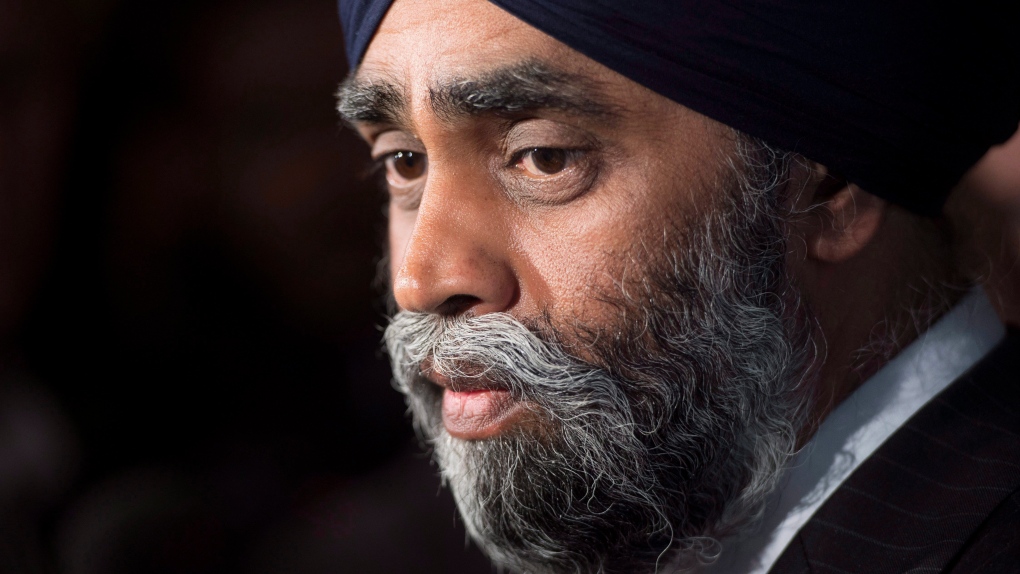 Minister of National Defence Minister Harjit Sajjan speaks with the media after delivering a speech to the Conference of Defence Associations Institute in Ottawa, Wednesday May 3, 2017. (THE CANADIAN PRESS / Adrian Wyld)

OTTAWA -- Canada will respect any decision by the Iraqi government to expel foreign troops from the country, Defence Minister Harjit Sajjan said Friday, even as reports suggested the United States was considering sanctions and cuts to military aid should Baghdad give American forces the boot.

Speaking to reporters by phone during a visit to the Middle East, where he met with some of the hundreds of Canadian troops participating in the five-year fight against the Islamic State of Iraq and the Levant, Sajjan said Canada wants to continue its military training efforts in Iraq.

Yet the minister, whose visit included stops in Jordan and Kuwait, acknowledged that "obviously the Iraqi government has concerns" and that western allies are "listening to those concerns" and trying to address them through talks.

However, he added: "We are there at the request of the Iraqi government. If they were to change that, we do have to respect that."

Canada's mission in Iraq has two main elements. One involves about 200 troops who have been training local forces through NATO to fight ISIL. A similar number of special forces have been working separately with Iraqi counter-terrorist units as part of the U.S.-led anti-ISIL coalition.

Both elements saw their missions suspended last week, with orders for the troops to hunker down on military bases or, in some cases, relocate to Kuwait, over fears Iran or its proxies would retaliate for the U.S.'s having killed Iran's most important general, Qassem Soleimani.

Iran did fire a volley of ballistic missiles at U.S. and coalition bases in Iraq, including one in Irbil the Canadian special-forces troops have used for years. No serious injuries were reported.

While some Canadian troops have since returned to work, others remain on lockdown. Overshadowing everything are questions about whether the Iraqi government will expel all foreign troops.

Following Soleimani's death, the Iraqi parliament passed a non-binding resolution calling for them to leave. While many Sunni and Kurdish parliamentarians boycotted the vote, outgoing Iraqi Prime Minister Adil Abdul-Mahdi voiced his own support for the resolution.

Abdul-Mahdi, who announced his resignation following mass demonstrations in December but remains in a caretaker role for now, has since said he will leave the decision on whether to allow foreign troops to remain in the country to the next government.

The U.S. has pushed back against calls for American and allied troops to leave the country, with the Wall Street Journal reporting that President Donald Trump's administration is considering sanctions and cuts to millions of dollars in military aid if Iraq expels its troops.

While discussions with the Iraqis are ongoing, Sajjan said, "rest assured that one of the things we have discussed is that we need to continue on this mission because ... even though they do not control territory, they (ISIL) pose a risk in the region."

Sajjan's visit to the region coincided with the resumption of some Canadian Armed Forces activities in Iraq, including operations by special forces soldiers and supply flights by military transport planes and helicopters.

The minister emphasized, however, that the safety of Canadian troops remained the "No. 1 priority."

He would not comment on whether Canada was given advance warning that Iran planned to fire missiles at the base in the northern Iraqi city of Irbil, where Canadian troops were located.