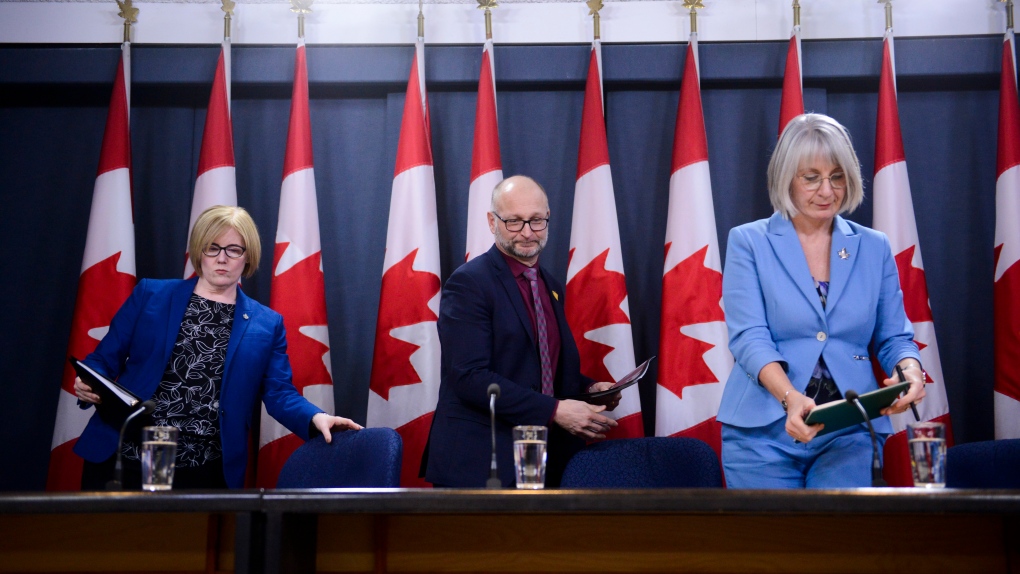 Carla Qualtrough, Minister of Employment, Workforce Development and Disability Inclusion, left to right, David Lametti, Minister of Justice and Attorney General of Canada, and Patty Hajdu, Minister of Health, make an announcement regarding a Bill entitled "An Act to amend the Criminal Code (medical assistance in dying)" during a press conference at the National Press Theatre in Ottawa on Monday Feb. 24, 2020. THE CANADIAN PRESS/Sean Kilpatrick

OTTAWA -- Some experts fear that legislation intended to make it easier for intolerably suffering Canadians to receive medical assistance to end their lives might actually make it harder in some cases and will create confusion among doctors who provide the procedure.

Bill C-7, introduced Monday, would remove a provision in the four-year-old assisted dying law that restricted the procedure to those whose natural death is "reasonably foreseeable" -- a restriction that was struck down as unconstitutional by a Quebec court last fall.

But the revised law would still use the notion of reasonable foreseeability to impose a number of restrictions on those who are not near death that wouldn't apply to those who are.

Dr. Stefanie Green, president of the Canadian Association of MAiD (medical assistance in dying) Assessors and Providers, says the bill muddies the already somewhat ambiguous notion of what constitutes reasonably foreseeable death and could mean some people who are currently eligible for an assisted death would not be eligible in future.

Jocelyn Downie, a professor of law and medicine at Dalhousie University in Halifax, says that exclusion is discriminatory and takes away access to the procedure that exists in the current law.

For those deemed to be near death, the government is proposing to drop the requirement that a person must wait 10 days after being approved for an assisted death before receiving the procedure. It would also reduce the number of witnesses required to one from two.

As well, it is proposing to drop the requirement that a person must be able to give consent a second time immediately prior to receiving the procedure.

Both Downie and Green welcomed those changes.

But they have concerns about the more restrictive requirements for those whose natural deaths are not deemed to be reasonably foreseeable.

Such people would face a minimum 90-day period for assessments of their requests for assisted deaths. One of the two medical practitioners who assesses a request would have to have expertise in the person's particular medical condition. And the person would have to be able to give final consent immediately prior to the assisted death.

Both Downie and Green said they're concerned that the bill might narrow the concept of reasonably foreseeable death, which has been interpreted to mean that a person is on a trajectory towards death -- be it in one, two, three or more years.

Downie and Green said a technical briefing Justice Department officials gave on the bill Monday left the impression that death must be relatively imminent to be considered reasonably foreseeable. Moreover, they noted that the preamble of the bill refers at one point to "dying persons."

"If they want to narrow it, they need to own that they're narrowing it and define it," Downie said in an interview.

The wording in the preamble "raises a question," said Green. "I'm not sure that's the intention of the government and if it is, boy, we better know that."

Green said that overall the members of her organization think the bill is "a step in the right direction" but they have some practical concerns, including "frustration" that they're going to have to continue wrestling with the concept of foreseeable death to determine which of the two proposed eligibility tracks apply in each case.

Green said there's also concern that those who are not deemed to be near death will have to be assessed by a medical practitioner with expertise in their medical condition. That expertise could be hard to find for patients in rural or remote areas.

Moreover, she said specialists are already consulted by doctors who are assessing a patient's eligibility for an assisted death. The bill would require those specialists to actually be involved in the assessments, a burden she predicted few would be prepared to do.

Downie said she's also concerned that the bill stipulates that a person not near death would have to be suffering intolerably to be assessed for an assisted death and then that assessment would have to last a minimum of 90 days.

"By definition, people in the second track have to experience 90 days of intolerable suffering and that seems cruel."

Downie said she was "floored" by the bill's blanket prohibition on assisted deaths for those suffering solely from mental illnesses.

He said the government -- which is asking for a four-month extension on the March 11 deadline given by the court to amend the law -- wants initial debate, which started Wednesday, to wrap up this week so that the bill can then be sent to committee for more detailed study.

However, Conservative justice critic Rob Moore said his party "would object to that timeline."

"This is an important matter for all members and needs thoughtful consideration. Any effort to curtail debate is inappropriate," he said in an email.

Conservatives believe the bill "goes far beyond" what was ordered by last fall's court ruling and "reduces protections for vulnerable members of our society," Moore added. He said his party also wants the bill to do more to protect the conscience rights of health professionals who don't want to be involved in any way in providing assistance in dying.

This report by The Canadian Press was first published Feb. 26, 2020

A previous version attributed a view to Justice Department officials that is held by Stefanie Green and Jocelyn Downie.