Are Liberals to blame for cancelled energy projects? 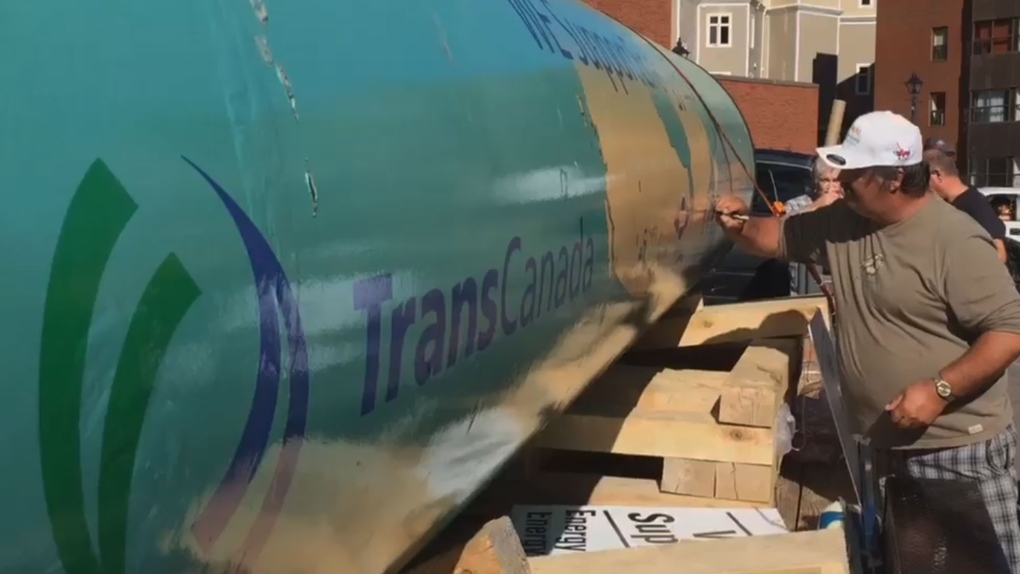 Supporters of the Energy East pipeline sign a piece of pipeline as hearings on the project get underway in Saint John. (Ashley Blackford/CTV Atlantic)

OTTAWA -- "The Liberals are failing Canadians by destroying investment confidence in the energy sector in Canada; The reality is this: that under the Liberals more energy investment has been lost than any other time frame in 70 years, $100 billion of energy projects cancelled."

Shannon Stubbs, the official Opposition's natural resources critic, appeared before a Commons committee this week to demand a probe into the Trudeau government's handling of the Trans Mountain project in the wake of a federal court decision quashing the pipeline's approval.

During the meeting, she said that under the Trudeau government's watch, "$100 billion of energy projects (were) cancelled," because of the Liberals' restrictive red tape and tax regimes.

But is it true that $100 billion worth of energy projects have indeed been cancelled, and is it government's fault?

This one earns a rating of "a little baloney." Here's why.

The Conservatives provided this breakdown of major energy projects that have been cancelled since the Liberals took office in 2015:

The projects total $101 billion, and the end dates of these projects did occur within the last three years.

The Trudeau government has introduced changes to its regulatory review process in Bill C-69, which is still under consideration in the Senate.

The bill would create a new Impact Assessment Agency and replace the National Energy Board with the Canadian Energy Regulator. The government says it will provide greater certainty and predictability for companies. It introduces new timelines and specific steps that companies and government will have to take in order for new energy projects to go forward.

The Liberals also brought in an interim assessment process for the Trans Mountain project that expanded the Indigenous consultation process and included upstream emissions as part of the environmental impact review.

Meanwhile, Canada's energy industry has raised concerns about Canada falling behind in the global competition for oil and natural gas investment.

The Canadian Association of Petroleum Producers (CAPP) released figures earlier this year showing total capital spending on Canadian oil and natural gas was $45 billion in 2017, down 19 per cent from 2016 and 46 per cent from 2014.

Germain Belzile, a senior researcher at the Montreal Economic Institute, says he believes government regulations are "more of a barrier than any help" in getting Canadian oil and gas to market. He said industry representatives are not sure that the Trudeau government's Bill C-69 will end this problem.

"All the comments I've had are that things will be more difficult, will be longer and that uncertainty will be increased with the new law," he said.

Grant Bishop, an associate director of research at C.D. Howe Institute, said a key barrier to pipeline development is that an approval doesn't actually mean an approval. He pointed to projects like Trans Mountain and Northern Gateway that initially passed lengthy project reviews -- with numerous conditions attached -- but were later further delayed by legal challenges.

"The go-forward on this is that anyone looking to do a project is going to discount the prospect of getting some ways down the road and having a setback, not because of something they did, but because of uncertainties in the regulatory process."

Jeff Rubin, a senior fellow at the Centre for International Governance Innovation, says economic conditions, not just regulations, have played a major role in many of these projects being cancelled.

He said TransCanada abandoned Energy East because a change in market conditions made keeping it a natural gas pipeline more lucrative.

He said Pacific Northwest, Grassy Point and Aurora were among several LNG projects that were shelved in Canada due to a global supply glut of liquefied natural gas.

"While certainly the approval process for pipelines and the legal obstacles around that have been obviously a factorΓÇª not all of that can be laid at the feet of the Liberal government," Rubin said.

There indeed have been several proposed energy projects that have been cancelled since the Trudeau government took office and many industry experts do believe Canada's complicated and lengthy regulatory process is a barrier to energy investment. However, economic conditions have played a factor in the cancellation of some of these projects. Therefore, blaming the Trudeau government for the death of $100 billion in energy activity contains "a little baloney."

The Baloney Meter is a project of The Canadian Press that examines the level of accuracy in statements made by politicians.

Each claim is researched and assigned a rating based on the following scale: