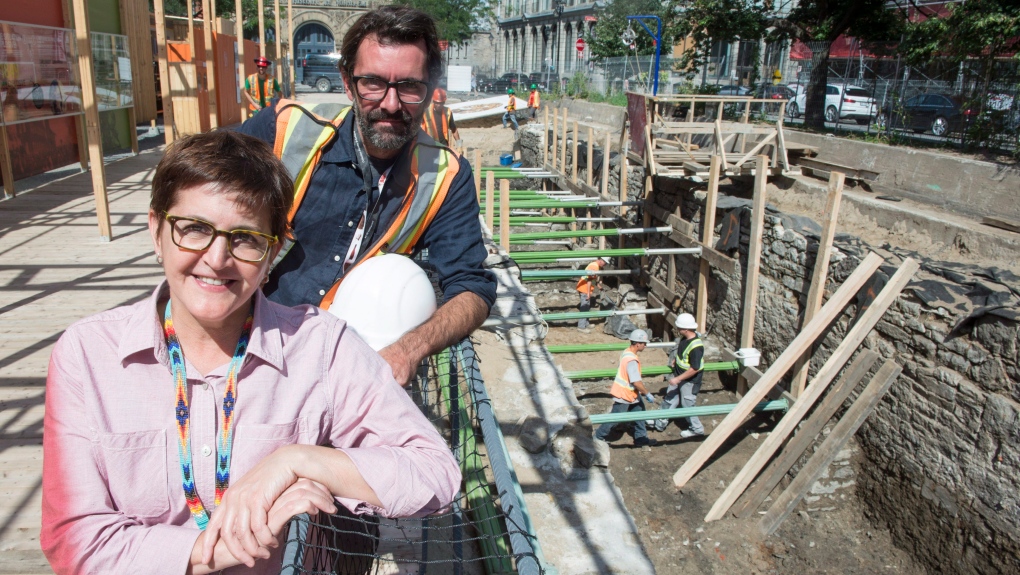 Chief archeologist Louise Pothier and the director of operations Hendrik Van Gijseghem are seen on the site of the archeological dig of the pre-Confederation parliament, Monday, August 14, 2017 in Montreal. (Paul Chiasson / THE CANADIAN PRESS)

MONTREAL -- Archeologists at the site of a pre-Confederation parliament in Montreal are about to reach the level they hope will yield a treasure trove of artifacts.

Digging began in late July -- the third such endeavour since 2010 -- in an effort to find out more about the two-storey columned neo-classical building that once stood at Place d'Youville, in Old Montreal.

By the end of this week, searchers will reach the layer where the parliament remains have been encased since the building burned to the ground in 1849.

Prior to the discovery of the parliament several years ago, the public knew little about the building's pivotal place in Canadian history or about Montreal's place as the capital of what was then the United Province of Canada.

Louise Pothier, director of exhibitions at Montreal's Pointe-a-Calliere archeological and history museum, calls it a unique site in Canada.

"Nowhere else do we have such intact remains of a place of power, so it makes it very distinct, very special," Pothier said. "Maybe if we're lucky enough, (we'll find) some official objects -- some objects related to the business of politics."

The first permanent parliament of the United Province of Canada was housed in the former St-Ann's Market and held its first session Nov. 28, 1844.

Key pieces of Canada's early legislation were adopted in the building, including the act establishing "responsible government" in 1848 -- a vital step in the emergence of a sovereign, English-French democratic state.

The turmoil surrounding the Rebellion Losses Bill, legislation that sought to compensate people who sustained property damage during the 1837-38 rebellions against the Crown, would lead to the sacking and burning of the building to the ground on April 25, 1849.

When the legislation received royal assent, angry Anglos stormed the building. Tory supporters were opposed to compensating Quebecers and Catholics who'd taken part in the rebellion.

Only a few items survived the blaze, including a portrait and a few books.

The portrait, depicting a young Queen Victoria from early in her reign, currently hangs outside the Senate chamber in Parliament's Centre Block in Ottawa.

In 2011, Robert Kaplan gave the museum a royal coat of arms that hung above the Speaker's chair in the parliament. The late Liberal MP and former solicitor general found it in a flea market in New York about 30 years earlier.

During the initial digs, expectations were tempered about what might be found. But searchers did unearth a pair of glasses and a tea set in addition to other items from the market's past: butchers' hooks, a butcher knife, bones, marbles, coins, and weights used for a scale.

The chances of finding any trace of government documents or volumes from the 20,000-plus volume parliamentary library had been deemed unlikely.

But in 2013, searchers found the charred remains of about a dozen books in a layer dating to the period of the parliament fire, including at least one French book.

"We were very surprised to find that kind of artifact, that kind of object," Pothier said. "We thought that everything burned in the flames and disappeared completely."

The market, which would be rebuilt before being razed in 1901, was recently used as a parking lot.

Half of building to be excavated

As it turns out, that last vocation would be a boon for archeologists because everything underneath the pavement was preserved. The new building was rebuilt on top of the remains of the original market, making it like a time capsule.

Pothier said previous excavations made it possible to identify places believed more sensitive and rich in terms of possible artifacts.

What they find will help them map out the building: where the assembly chamber and legislative council rooms were located as well as personal rooms where parliamentarians would have shaved, cleaned and refreshed themselves or grabbed a bite to eat.

In all, about 50 per cent of the former building will be excavated.

Hendrik Van Gijseghem, the museum's project manager, said once they reach that sensitive area, heavy machinery will give way to 22 archeologists, who will look at two-metre-by-two-metre sections, digging in increments of 10 centimetres.

The City of Montreal has kicked in $6 million and the site is open to members of the public, who can observe the work from a platform above.

"In the end, we're going to know fairly precisely where such-and-such artifacts are coming from," Van Gijseghem said. "And with the hope of being able to reconstruct the internal organization and vertical organization of the parliament."

Work is expected to wrap up by November.