A week into consultations, more than 200,000 Canadians weigh in on assisted dying reforms 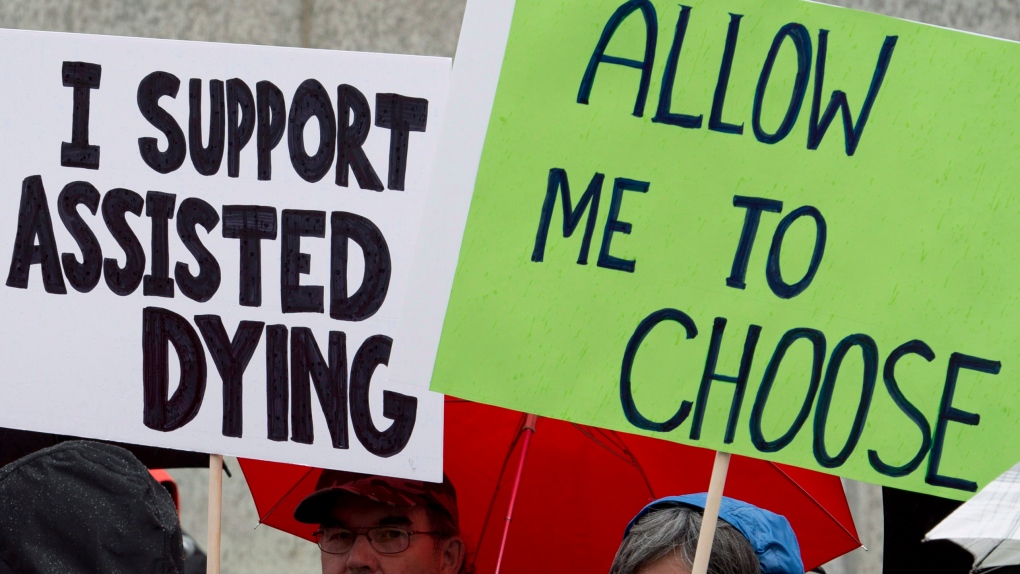 Supporters rally outside the Supreme Court of Canada on the first day of hearings into assisted dying, in Ottawa, on Wed., Oct. 15, 2014. (Adrian Wyld / THE CANADIAN PRESS)

OTTAWA -- More than 200,000 Canadians have offered their thoughts on the federal government broadening Canada's medically-assisted dying law in the first week of consultations.

According to Justice Minister David Lametti’s office, as of noon Tuesday the government had received 217,091 submissions through the online survey that opened on Jan. 13 to solicit feedback on potentially expanding the eligibility criteria and other aspects of the law. The survey is open until Jan. 27.

Prime Minister Justin Trudeau spoke Tuesday about the importance of weighing Canadians’ feedback on modifying the relatively new law after a court ruling struck down sections of it in September, given it is a “deeply personal issue.”

“We knew when we put forward that law, that big change for Canadian society a number of years ago, that there would be further reflections, there would be refinements in that balance that is so delicate,” Trudeau said at his cabinet retreat in Winnipeg of the law that came into effect in 2016.

Just as the fall federal election campaign got rolling, the Quebec Superior Court ruled that sections of the federal and Quebec laws on medically-assisted dying were invalid, finding that they were unconstitutional because they were too restrictive.

The court specifically took issue with the Criminal Code requirement that a natural death be "reasonably foreseeable" in order for a person to be eligible for assisted death. This gave the federal and provincial governments six months to review the ruling and revise their laws, with the court’s ruling set to come into effect on March 11, 2020, unless an extension is granted.

Lametti said earlier this week that he is aiming to table the legislative amendments in February, but has not ruled out asking for an extension. The minority dynamics of this Parliament may also become a factor if the government is looking to pass its proposed changes before the March deadline.

On Tuesday the Quebec government announced it would comply with the court decision, and will drop the sections the court took issue with but not make any additional amendments to the provincial law.

The federal law as it stands states that Canadians 18 years of age or older who are considered mentally competent can access an assisted death, under a series of eligibility criteria. It also puts in place protections for medical professionals who would play a role in administering the assisted death. Not included in the law—but called for by some at the time— was the ability for patients to give advance directives, or for mature minors to have the ability to seek an assisted death.

Since the Liberals passed this entirely new regime they have faced questions about changing the law. Even before it passed, the legislation generated considerable parliamentary debate, with a handful of Liberal MPs voting against it, saying that as it was drafted it would be unconstitutional. Among them was now-minister Lametti.

“I think the most important thing for our country is making sure that we get that balance right between protection of the most vulnerable and respecting peoples’ rights and ability to make choices about their own lives,” Trudeau said Tuesday. “How far that will go, whether it’s certain elements first, other elements later, that’s part of the reflections we’re having as we listen to Canadians.”

Among other questions, the survey asks Canadians whether they think the current safeguards are enough to prevent misuse of an assisted death should the eligibility be broadened to include people whose deaths are not reasonably foreseeable. The survey also asks whether physicians or nurse practitioners should be able to provide an assisted death to a person who is no longer able to consent on account of a diminished decision-making capacity, but had previously prepared a document stating they consented to an assisted death at a later date.

The online feedback the federal government is now soliciting is in addition to ongoing in-person consultations with stakeholders being conducted across Canada by Lametti, Health Minister Patty Hajdu, and Minister of Employment, Workforce Development and Disability Inclusion Carla Qualtrough.