Ottawa to honour Canadians who served on Libya mission 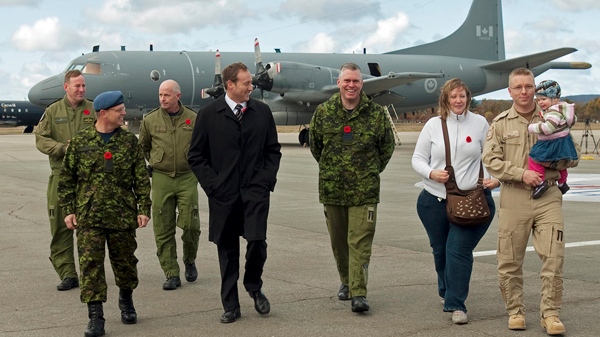 OTTAWA - Canadian military personnel who helped enforce a no-fly zone over Libya will be recognized for their efforts to protect citizens of the North African country from dictator Moammar Gadhafi.

Prime Minister Stephen Harper and Defence Minister Peter MacKay will take part in a celebration on Parliament Hill next week.

"This is in recognition of what was a significant contribution by Canada in the effort to assist the Libyan people on the road to their future peace and stability within that country," MacKay said Wednesday.

"This is a recognition of the contributions of the men and women of the Canadian Forces ... which were recognized by our allies, and most importantly by the Libyan people, as being pivotal in the transformation that has taken place in that country."

The Canadian air force officer who commanded NATO operations in Libya, Lt.-Gen. Charles Bouchard, will be honoured at the ceremony for his leadership.

The Canadian navy was also dispatched to the region after the UN security council passed a resolution that called on the international community to protect civilians in Libya following an uprising against the dictatorship of Gadhafi.

The last of the Canadians who helped enforce the no-fly zone over Libya returned to Canada earlier this month.

Gadhafi was captured and killed by rebel troops last month after a French Rafale fighter-bomber took out his convoy as it sped away from the dictator's besieged hometown of Sirte.

But while military personnel who served in Libya will get their day in the sun, members of the Canadian Forces who served in Afghanistan must wait a while longer.

Smaller ceremonies have been held for soldiers returning from Afghanistan, but so far there has been nothing on the scale of the celebration planned for Nov. 24 on Parliament Hill to honour those who served in Libya.

MacKay said such a celebration will be held for veterans of the decade-long Afghan war once the NATO-led training mission ends in 2014.

"Well, because we're not finished our work in Afghanistan, is the short answer," MacKay said, when asked why the Afghan veterans have not had a similar celebration.

"We still have over 900 troops there now, in and around Kabul, assisting in the training mission. We'll be there until 2014, whereas with Libya now, this is seen as a completed mission."

Canada's combat mission in Afghanistan officially ended this summer, but 950 military trainers will remain in and around the capital city of Kabul through 2014.

Smaller contingents of Canadian trainers have also been deployed to the cities of Mazar-i-Sharif in the north and Herat in the west, near the border with Iran.

Meanwhile, MacKay and Israeli Defence Minister Ehud Barak were meeting Wednesday in Ottawa to discuss what a news release called "a variety of issues related to Canada-Israel defence co-operation."

Chief among those issues will be the escalating tensions between Israel and Iran.

The International Atomic Energy Agency released a report last week that said Iran has conducted secret experiments that could lead to the development of a nuclear device.

But Iran denies the allegations, claiming the UN nuclear watchdog based its findings on evidence fabricated by the United States and its allies.

MacKay also said Canada is keeping an eye on the unfolding situation in Syria, where the regime of President Bashar Assad has for months been engaged in a bloody crackdown on anti-government protesters.

The defence minister did not rule out Libya-style action in Syria, but said such action would require "further contemplation" and a resolution from the UN Security Council.

"There's a number of things that would have to happen. It is a much more complex situation in many ways, given the circumstances on the ground in Syria," MacKay said.

But he added: "I can assure you, in our capital and in capitals around the world, NATO countries are discussing what is happening in Syria."