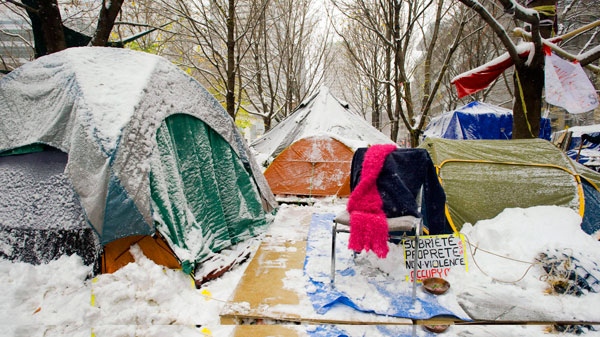 TORONTO - Protesters hail it as a life-changing experience while pundits acknowledge it as a driving force in the national conversation, but the man who helped launch the Canadian incarnation of the "Occupy" movement says his adopted home country didn't execute his vision the way he hoped.

Kalle Lasn, co-founder of the Vancouver-based magazine that touched off the international campaign, said the protest against fiscal imbalance and corporate influence suffered from media misrepresentation and a comparative lack of energy during its first month on Canadian soil.

Canada's activists first took to the streets on Oct. 15, three months after Adbusters Media Foundation published a provocative ad exhorting readers to "Occupy Wall St." They were a month behind protesters in New York who took that call to heart by setting up camp in Manhattan's Zuccotti Park. While protesters from Halifax to Vancouver emulated their global counterparts by pitching tents in public spaces and brainstorming ways to challenge the status quo, Lasn said the efforts he witnessed lacked some of the passion that characterized rallies in the United States.

"I must admit, there is something kind of special about Canada," Lasn said in a telephone interview. "Somehow I found that many of the things that were happening in the U.S., there seems to be more vigour and spunk in some of the occupations there."

Lasn's impressions of the comparative lassitude stemmed from visits to the Occupy site in his adopted home town of Vancouver, which -- along with other urban campsites in Toronto, Montreal, Quebec and Edmonton -- was forcibly shut down by city authorities earlier this week.

While the site attracted its share of energized, politically engaged youth who the Estonian-born Lasn describes as "the new left," he also noted a stronger presence from fringe elements that has given left wing movements a bad name in the past, he said.

"I just had a feeling that there was a little bit too much of the loony left there," Lasn said. "I had a feeling that we needed more of the young, new-left spunk that I felt was happening in Zuccotti Park. I didn't see all that much of it here in Vancouver."

Lasn is quick to lay much of the blame on mainstream media, who he accuses of depicting the protesters as lawless rebels and their camp sites as dens of iniquity.

By zeroing in on incidents of drug use and crime -- which take place in staggering numbers every day -- Canada's news outlets failed to communicate the key message at the heart of the "Occupy movement," he said.

"The Canadian media really dropped the ball on this one," Lasn said. "Instead of seeing it as a movement of young people fighting for a different kind of future, which is so beautiful and so valid, they basically saw it as a pesky irritation that had to be got rid of."

That negative coverage may have motivated authorities to crack down on occupation sites in recent weeks and forced protesters themselves to lose focus as they fretted about when eviction notices would be handed down, he said.

"It's been a bit of a dismal few weeks for the movement, especially in Canada," he said. "In Zuccotti Park and other places there's still a lot of positive feeling, but here in Canada, somehow we did lose the high ground. . . . we finished up defending ourselves against people who didn't like us."

Protesters themselves concede that putting an end to the urban occupations may revitalize the dialog at the heart of the movement.

Jamie Klinger, who spent a month producing works of art at the Montreal protest site, said many of his fellow activists had to devote their time to ensuring the camp site was sanitary and stocked with food.

Now they're free to refocus their efforts, and Klinger said they've put together an extensive to-do list.

"This is just the beginning, I can't wait to see what happens a month from now. Occupy Montreal is going to be everywhere," Klinger said.

Klinger's enthusiasm was widely echoed among the youth who Megan Boler encountered during the week she spent at the Occupy site in Toronto.

The University of Toronto media studies professor surveyed protesters across North America as part of a project analyzing young people's engagement with social movements and found similar sentiments on both sides of the border.

Half the protesters she interviewed said they have become deeply engaged with politics for the first time in their lives, saying the movement was the cause they'd waited a lifetime to support, she added.

The Canadian protesters were motivated by issues unique to their country such as rising levels of student debt and concerns for those who have fallen through the social safety net, she said.

The political polarization and economic turmoil that helped galvanize the movement south of the border is lacking here, Hackett said, adding Canadians have more political options and likely feel less disillusioned as a result.

"I don't think the same degree of alienation exists here politically, and I would say the same economically," he said. "You don't have millions of people losing their homes because of the regulations in the banking system and other strengths of the economy."

That comparative calm has its bright side, Hackett said, adding none of the Canadian urban occupations descended into violence as they did in U.S. locales like New York and Oakland.

Lasn himself had previously said he anticipated the Canadian "Occupy" movement would be more low-key than its U.S. cousin, which has begun to spawn concrete policy changes that show no sign of gaining traction here. Seattle city council unanimously passed a resolution to revisit its municipal banking practices, while Occupy protesters joined in a large-scale push to defeat anti-union legislation in Ohio earlier this month.

Still, Lasn has no doubt that the Canadian movement has done great good by stimulating debate and forcing a new generation of citizens to think critically about the world they live in.

"It's thrown a curve ball into the young psyche of Canada," he said, adding the people who slept in parks this month will spend the winter brainstorming to launch the movement's next phase in the spring.

"Whether it physically occupies in tents or does it in some other manifestation isn't relevant -- it's our message that's relevant."

With files from Sidhartha Banerjee