Most travellers stranded by ash to be home by Monday 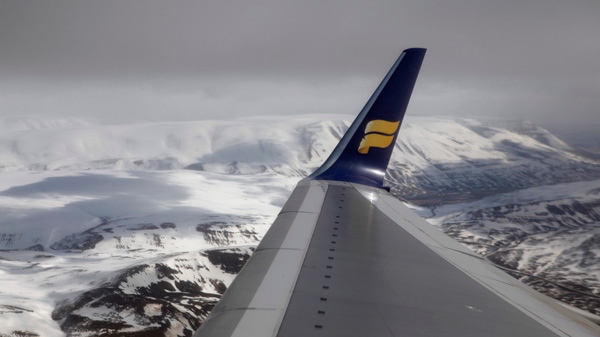 The wing of an Icelandair flight is seen as it leaves Akureyi Airport in Akureyi, Iceland on Saturday, April 24, 2010. (AP / Carolyn Kaster)

LONDON - Most tourists stranded by the volcanic ash crisis will be home by Monday although thousands could be stuck for nearly another week, European airlines and government officials said.

A week of airspace closures caused by ash spewed by Iceland's Eyjafjallajokull volcano prompted the worst breakdown in civil aviation in Europe since World War II, with about 100,000 flights cancelled.

Mark Tanzer, chief executive of Britain's ABTA, which represents British travel agents and tour operators, said about 100,000 stranded British travellers should have been returned home by Monday morning. About 35,000 more will remain marooned until Friday, the group said.

"While most flights are back to normal, and most stranded British passengers will be back by the end of this weekend, there is still quite a high level of disruption in some destinations. In some areas of the world, there is a significant lack of air capacity to enable British people to be returned quickly," Tanzer said.

Many Icelandic airports are closed and though authorities say Eyjafjallajokull is now producing much less ash, they confirmed no signs of the eruption ending.

More than one hundred volunteers joined Iceland's Red Cross and other agencies over the weekend to help clear ash from farms and houses close to the volcano site, Iceland's Civil Protection Agency said.

The agency said scientists flew over the eruption site late Saturday as part of work to monitor Eyjafjallajokull's activity. "The quantity of the volcanic plume is slowly decreasing," the agency said in a statement. But it added that there are "no indications that the eruption is coming to an end."

Scientists said this weekend the volcano is unlikely at present to cause further disruption to European airspace, as the ash plume is now too small to reach jet streams and because winds have changed direction.

Austrian Airlines says passengers still waiting for flights at long haul destinations including Bangkok would be home within days. "We are confident that by Monday all passengers will be returned to Europe," Austrian spokeswoman Pia Stradiot said. "The situation is fully under control."

In Belgium, foreign affairs spokesman Patrick Deboeck said most travellers should be on the way on Monday at the latest. "There are still some problems in Bangkok and the United States but we expect a lot of departures today and Monday," he said. "We hope that everything within the coming week will be back to normal."

Elisabeth Manzi, spokeswoman at Scandinavian airline operator SAS, said it is aiming to bring back all stranded passengers over the weekend, but that "a few" may still be left on Monday. Swedish foreign ministry spokeswoman Barbro Elm said an estimated 250 Swedes were still stuck in Bangkok as of Friday -- including about 150 who are waiting at Bangkok airport.

France's foreign ministry said a small number of French passengers remain grounded in Nepal and about 300 in New Delhi.