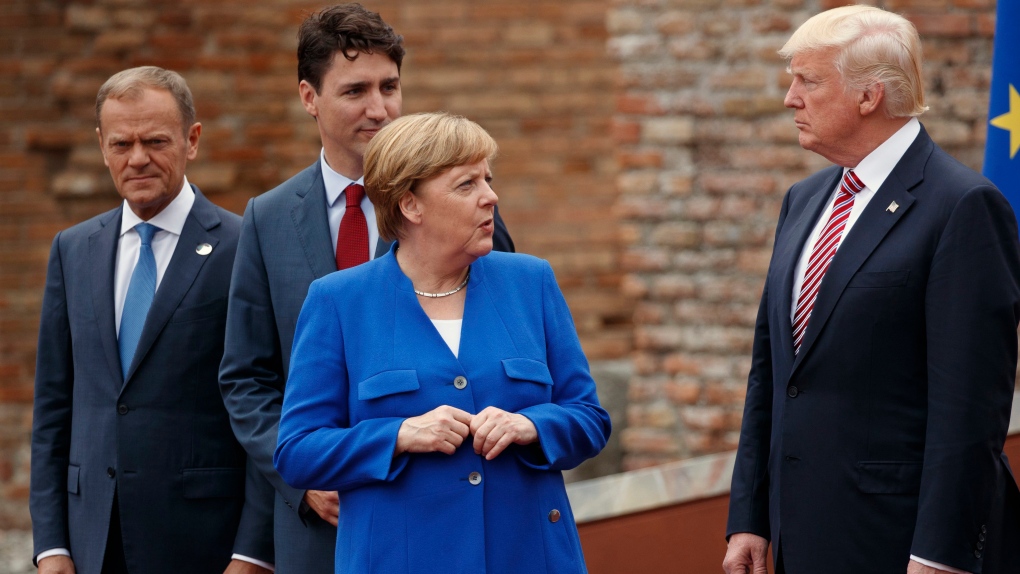 WASHINGTON -- U.S. President Donald Trump said Saturday that he will postpone until the fall a meeting of Group of 7 nations he had planned to hold next month at the White House despite the ongoing coronavirus pandemic. And he said the group's membership should include Russia, Australia, South Korea and India.

Trump told reporters on Air Force One as he returned to Washington from Florida that he feels the current makeup of the group is “very outdated” and doesn't properly represent “what's going on in the world.”

He said he had not yet set a new date for the meeting, but thought the gathering could take place in September, around the time of the annual meeting of the United Nations in New York, or perhaps after the U.S. election in November.

The surprise announcement came after German Chancellor Angela Merkel's office said Saturday that she would not attend the meeting unless the course of the coronavirus spread had changed by then.

The leaders of the world's major economies were slated to meet in June in the U.S. at Camp David, the presidential retreat in Maryland, but the coronavirus outbreak hobbled those plans. Trump announced in March he was cancelling the summit because of the pandemic and that the leaders would confer by video conference instead. But Trump then switched course, saying a week ago that he was again planning to host an in-person meeting.

“Now that our Country is `Transitioning back to Greatness', I am considering rescheduling the G-7, on the same or similar date, in Washington, D.C., at the legendary Camp David,” Trump tweeted. “The other members are also beginning their COMEBACK. It would be a great sign to all - normalization!”

Trump has repeatedly advocated for expanding the group to include Russia, prompting opposition from some members, including Canada's Justin Trudeau, who told reporters he had privately aired his objection to Russian readmittance.

“Russia has yet to change the behaviour that led to its expulsion in 2014, and therefore should not be allowed back into the G7,” he said at a news conference.

The House also passed a bipartisan resolution in December 2019 that supports Russia's previous expulsion from the annual gathering.

Russia had been invited to attend the gathering of the world's most advanced economies since 1997, but was suspended in 2014 following its invasion of Ukraine and annexation of Crimea.