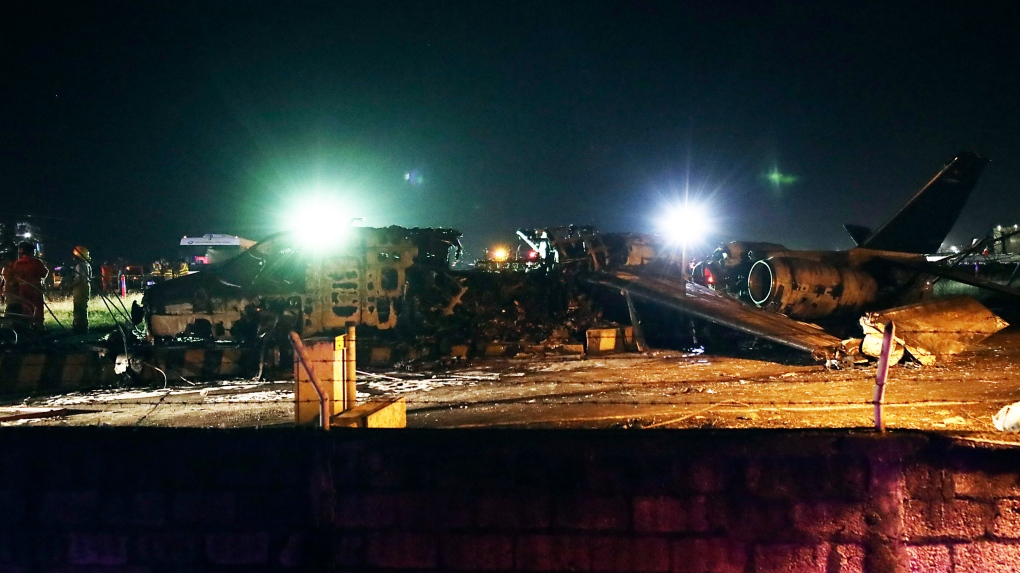 Firemen and rescuers stand beside the remains of a Lion Air, West Wind 24 aircraft after it caught fire during take off at Manila's International Airport in Philippines on Sunday, March 29, 2020. A plane carrying eight people has caught fire while attempting to take off from Manila's airport on a flight bound for Japan, killing all those on board, officials said. (AP Photo)

MANILA, PHILIPPINES -- Philippine aviation officials on Monday grounded all aircraft belonging to a company that owns a plane that caught fire while taking off from Manila's airport, killing all eight people on board.

All of Lionair Inc.'s aircraft will remain grounded during the investigation of the burning of its Westwind 24 plane late Sunday, they said. The plane had been used earlier to transport medical supplies for the coronavirus outbreak.

Lionair, a Philippine-based charter company, is not related to Lion Air, an Indonesian low-cost airline.

The twin-engine aircraft was on a medical evacuation mission when it caught fire. Two passengers from the U.S. and Canada and six Filipino flight crew and medical personnel died when the Tokyo-bound plane burst into flames on the main runway, airport general manager Ed Monreal said.

The fire prompted the closure of the airport's main runway and caused one international flight to be diverted.

The aircraft's cockpit voice recorder has been recovered by investigators, officials said.

Lionair leases executive jets, helicopters and turbo-propeller planes for domestic and foreign travel, including medical emergency flights. Lawyer Lester Ople, a spokesman for the company, said four planes and seven helicopters would be grounded and that Lionair would fully co-operate with the investigation.

Ople said the evacuation was not related to the coronavirus.

The Department of Health said Monday that Lionair has helped transport medical supplies, including ones used to fight the coronavirus outbreak, from Manila to central and southern provinces. The pilot and crew of the plane that caught fire at the airport had transported medical supplies to four provinces before they perished, Health Undersecretary Maria Rosario Vergeire said.

The Manila airport had only minimal staff due to air travel restrictions that are part of a monthlong lockdown imposed by the government in the northern Philippine region of Luzon to fight the coronavirus outbreak, officials said.