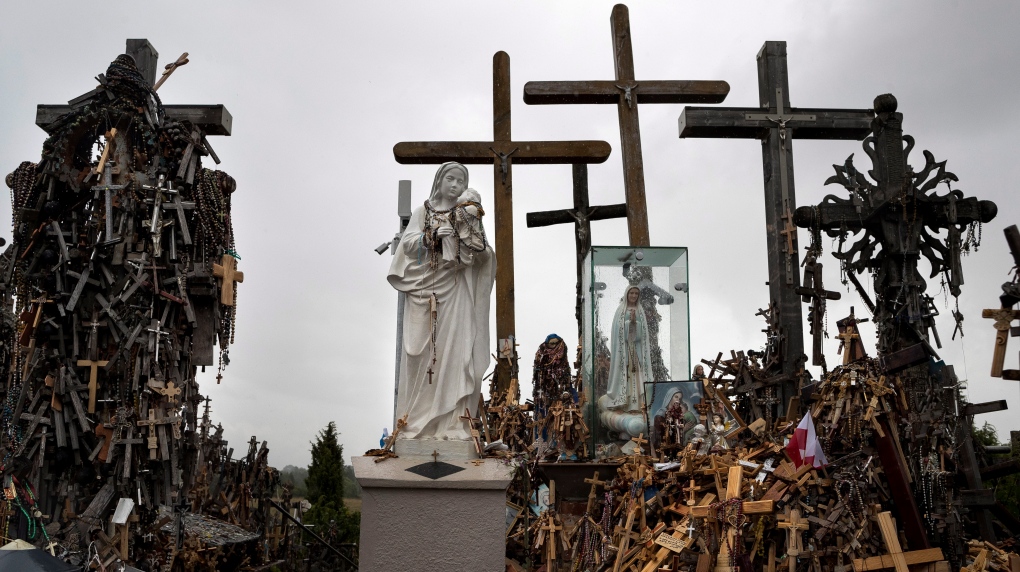 In this photo taken on Wednesday, July 17, 2019, statues of the Virgin Mary and crosses are photographed at the Hill of Crosses a Lithuanian national pilgrimage site near the city of Siauliai, Lithuania. Lithuania officials have condemned the actions of a Chinese tourist who vandalized the Baltic country's top religious heritage site. A video, originally posted on Instagram in November, 2019 but that came to the Lithuanian public’s attention over the weekend, shows a woman removing a wooden cross that expressed support for the Hong Kong pro-democracy movement from the Hill of Crosses, a large mount adorned with tens of thousands of crosses left by pilgrims and visitors. (AP Photo/Mindaugas Kulbis)

VILNIUS, LITHUANIA -- Lithuania officials have condemned the actions of a Chinese tourist who removed a cross expressing support for the Hong Kong pro-democracy movement from the Baltic country's top religious heritage site.

In a video that came to the Lithuanian public's attention over the weekend, a woman is seen taking the wooden cross from its place at the Hill of Crosses, a pilgrimage site adorned with tens of thousands of crosses.

"We have done a good thing today. Our motherland is great," the woman is heard saying in the video, which was originally posted on Instagram in November, after she threw the cross away.

Lithuanian Foreign Minister Linas Linkevicius condemned the woman's action in a tweet that called it a "shameful, disgraceful act of vandalism" and said such behaviour "can't and won't be tolerated."

The incident does not seem to be isolated. A photo posted online shows graffiti on another cross dated later in November. The graffiti read, "Hope all cockroaches soon rest in peace. Hope HK can return to peace."

Police have launched an investigation into both incidents at the site in northern Lithuania once visited by Pope John Paul II, who declared it a place of hope, peace, love and sacrifice.

The Hill of Crosses, which has been used by Catholic pilgrims and Lithuanian patriots for centuries, also features ten of thousands of effigies and rosaries along with crosses of various sizes.

Successive Russian regimes occupying Lithuania attempted to demolish the site several times during the 19th and 20th centuries, but new crosses were erected and today it's one of Lithuania's top tourist destinations.