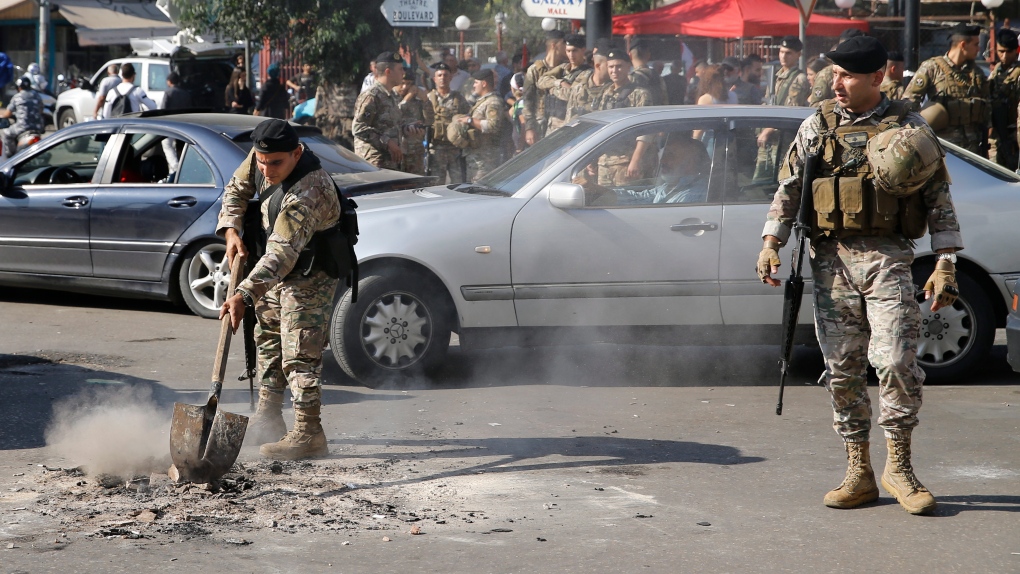 A soldier removes remains of burnt tires placed by anti-government protesters to block a road, as others stand guard in Hazmiyeh, a suburb of Beirut, Lebanon, Tuesday, Nov. 5, 2019. (AP Photo/Bilal Hussein)

BEIRUT -- Lebanese troops deployed Tuesday in different parts of the country to reopen roads and main thoroughfares closed by anti-government protesters faced resistance in some areas, leading to scuffles.

In most places, protesters withdrew peacefully as the troops moved in. But in Beirut's northern suburb of Zouk Mosbeh, a scuffle erupted when some demonstrators refused to move away from the main highway linking Beirut with northern Lebanon.

Several protesters were detained by troops. One protester, an older man, fainted and was rushed away in an ambulance; the Lebanese Red Cross later said he was in stable condition.

Anti-government protesters have been holding demonstrations since Oct. 17, demanding an end to widespread corruption and mismanagement by the political class that has ruled the country for three decades. The protesters have paralyzed Lebanon by closing roads inside cities as well as major highways.

"We are not defying the army but we want our demands to be met," said hairdresser Elie Abdu, 29, in Zouk Mosbeh. "We want a technocrat government, we want the poor to have food and medical care."

The protesters have been demanding the new Cabinet not include politicians but consist of experts who can work on getting Lebanon out of its economic crisis.

Also in Beirut, in the nearby area of Jal el-Deeb, troops chased after protesters who were closing a major road, running after them into streets until they rushed into a church and hid inside it.

The protesters who have been closing roads for more than two weeks have started holding sit-ins inside and at the entrances of state-run companies and institutions, including the country's two cellular telephone companies as well as well as the electricity company.

Last week, Prime Minister Saad Hariri resigned, meeting a key demand of the protests. The leaderless anti-government movement has united Lebanese from various religious sects in a call for the overthrow of the political system that has dominated the country since the civil war. Decades of corruption and economic mismanagement that followed have culminating in a severe fiscal crisis.

President Michel Aoun has not yet set a date for consultations with heads of parliamentary blocs to name a new prime minister, a procedure that follows the resignation of a Cabinet.