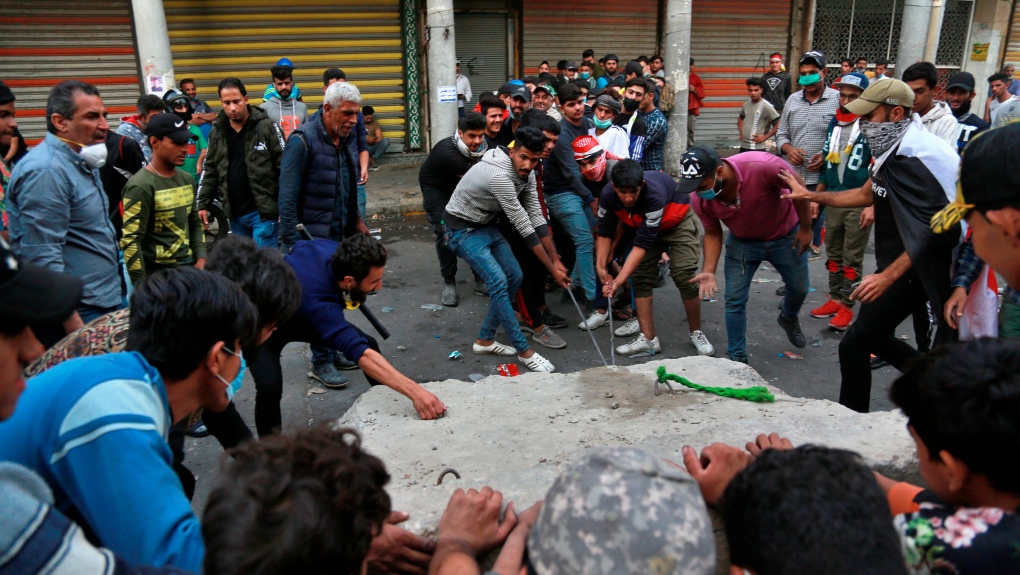 BAGHDAD -- An anti-government protester in Iraq was killed Sunday by a direct hit to the head from a tear gas cannister amid fresh clashes on a strategic Baghdad bridge, security and medical officials said.

At least 32 others were wounded in violent clashes with security forces, just hours after demonstrators retook control of part of Ahrar Bridge from security forces. The protesters now hold three bridges spanning the Tigris River toward the heavily fortified Green Zone, the seat of Iraq's government. Security forces had deployed Sunday on the other side of the bridge and erected concrete barriers to keep protesters from pushing into Green Zone.

Elsewhere, protesters blocked roads with burning tires in parts of central and southern Iraq, halting traffic and paralyzing work following a call for a national strike.

Since the anti-government protests began Oct. 1, at least 320 people have been killed and thousands wounded in the capital and the mostly Shiite southern provinces. Demonstrators have taken to the streets in the tens of thousands over what they say is widespread corruption, lack of job opportunities and poor basic services despite the country's oil wealth.

Bridges leading toward the Green Zone have been a frequent flashpoint in the protests. Demonstrators took control of those bridges earlier this month but were later repelled when security forces took harsh suppressive measures.

Two Katyusha rockets fell Sunday in the vicinity of the Green Zone but caused no casualties. One hit the Tigris River and the other fell on an empty soccer stadium, security officials said. The officials all spoke on condition of anonymity in line with regulations.

Demonstrators told The Associated Press they were tightening civilian security measures after a bomb planted under a car Friday killed three people in Tahrir Square, the hub of the protest movement. The protesters said there were also growing fears of reprisal from authorities.

Checkpoints were erected in each of the four entrances to Tahrir Square, where many demonstrators have entrenched themselves by erecting tents and refusing to leave. Young men are stationed in each entry point, inspecting bags for sharp objects and weapons.

Protesters said this was a result of a collective decision made to implement stricter security measures after several violent incidents they said were perpetrated by alleged government infiltrators.

Omar, 21, a medical volunteer, said one of his colleagues was stabbed by someone who "wore a white coat like us, pretended to be like us. That is why they are searching for weapons and knives."

"In Tahrir, we know we are safe, so we decided to take these measures, to make it safer," said Noor, 24, a protester who requested anonymity because she said she feared retaliation from the government or Shiite militia groups. "Outside the square we can be taken, arrested, disappear."

Protesters have also taken individuals measures: Noor always wears a surgical mask and sunglasses to be unrecognizable in photographs and videos she fears might be monitored by the authorities.

The protesters have managed to push back onto part of Ahrar Bridge on Sunday, after seizing portions of Sinak Bridge and central Khilani Square the previous day following fierce clashes. They were also present in Jumhouriyya Bridge adjacent to Tahrir Square.

On Saturday, Iraqi security forces had withdrawn from Khilani Square after firing live ammunition and tear gas against protesters trying to tear down a concrete barrier blocking entry to the square. Protesters also took control of a five-story parking garage adjacent to the bridge, giving them a bird's eye view over the Green Zone and the street below, mirroring tactics employed in Tahrir Square, where they occupied an iconic 14-story Saddam Hussein-era building that has become a reference point for demonstrators.

In the southern port city of Basra and in cities like Nasiriyah, Amara and Kut, protesters set tires ablaze to close off roads, keeping employees from reaching their workplaces. Schools, universities and other institutions closed for the day.

In parts of Baghdad, particularly the sprawling Sadr City neighbourhood, protesters sat in the middle of the streets to prevent employees from getting to their workplaces. They also blocked roads with motorcycles and tuk-tuks, snarling traffic.

"There will be no offices open until the last corrupt person is removed," one protester said, declining to be identified for security reasons. "Only then we will pull out from here."

The roadblocks are partly in response to a call by influential Shiite cleric Muqtada al-Sadr for a voluntary strike to keep up the pressure on politicians.