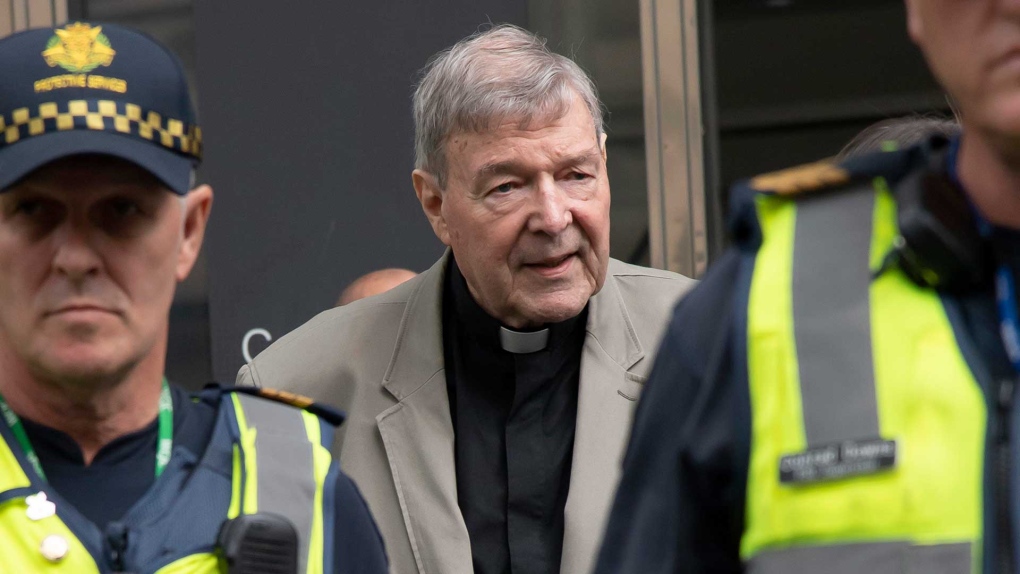 MELBOURNE, Australia -- Lawyers for the most senior Roman Catholic found guilty of child sex abuse argued in his appeal on Wednesday that he could not have molested two choirboys in an Australian cathedral undetected moments after Sunday Masses while he was dressed in an archbishop's robes.

Cardinal George Pell, 77, wore a black suit and black shirt with a cleric's collar when he appeared for the Victoria state Court of Appeal hearing before three judges. He came and went from the court as the sole occupant of a prison van. He said nothing during the hearing.

Pell's lawyer Bret Walker argued for more than five hours that the five verdicts against Pell were "unsafe and unsatisfactory" and should be overturned.

Pell's lawyers cited former High Court Justice Michael McHugh who said "juries are likely to be affected by the prejudices and even the hysterias that from time to time are found in the community."

Demonstrator Joe Mitchell, 83, drove more than 1,000 kilometres (600 miles) from his home in Newcastle in New South Wales state to Melbourne to protest outside the court against the church response to child abuse.

"I'm a victim. I hope they put a rope around his ... neck," a tearful Mitchell said. "They say how could you remember back 70 years? I remember everything."

The prosecution will argue on Thursday why the verdicts were sound and should stand. Whoever wins, the case could reach the High Court, Australia's ultimate arbiter.

A jury unanimously convicted Pell in December of orally raping a 13-year-old choirboy and indecently dealing with the boy and the boy's 13-year-old friend in Melbourne's St. Patrick's Cathedral in the late 1990s. Pell had become archbishop of Melbourne, Australia's second-largest city, only months before.

Court orders for months had prevented publication of the details of that trial and an earlier trial on similar charges that had ended in September with a deadlocked jury.

Pell was sentenced in March to six years in prison. He is held in special protective custody because pedophiles are regarded as being at higher risk of harm from other prisoners.

While Pell remains Australia's highest-ranking Catholic, the Vatican is conducting its own investigation into the convictions of Pope Francis's former finance minister.

Francis' papacy has been thrown into turmoil by clerical sexual abuse and the church's handling of such cases worldwide. In a little more than a year, the pope has admitted he made "grave errors" in Chile's worst case of coverup, Pell was convicted of abuse, a French cardinal was convicted of failing to report a pedophile, and a third cardinal, former U.S. church leader Theodore McCarrick, was defrocked after a Vatican investigation determined he molested children and adults.

Walker told the three judges the main ground for appeal was that the jury could not have found Pell guilty beyond reasonable doubt on the evidence.

In written submissions, Pell's lawyers said that more than 20 prosecution witnesses who had an official role in the Sunday Mass in 1996, after which the then-Archbishop Pell molested the boys in a rear room over five or six minutes, gave evidence that the offences did not or could not have occurred.

"This evidence constituted a catalogue of at least 13 solid obstacles in the path of a conviction," the submissions said.

"No matter what view was taken of the complainant as a witness, it was simply not open to a jury to accept his words beyond reasonable doubt," they added.

Pell's lawyers argue in their submissions the "the evidence showed the offending was impossible."

One of the appeal judges, Justice Mark Weinberg, said the term "impossibility" had been used by the defence repeatedly during Pell's trial and was "quite misleading in lots of ways."

One of Pell's victims died of a heroin overdose in 2014 at the age of 31, apparently without making any accusation of abuse. State law prevents victims of sexual assault from being publicly identified.

Weeks after Pell molested the two boys in a priests' sacristy, the then archbishop has been convicted of squeezing the surviving choirboy's genitals as they passed in a corridor after Mass. Pell's lawyers argue that the new archbishop would have been speaking to worshippers on the front steps of the cathedral in the moments after a Mass in December 1996, when the prosecutors alleged he found his victims swigging altar wine and abused them.

Centuries-old church law dictated that bishops must not be left alone while robed, so he would have had clerics with him when he stumbled upon his victims in the sacristy, the lawyers argued.

His lawyers say the offending would have taken five or six minutes, and someone in the cathedral would have heard or seen something.

Walker said the archbishop's robes were so constrictive that clerics could not use the toilet while wearing them, much less engage in sexual abuse.

Prosecutors argue the trial heard corroborative and supportive evidence for the complainant's testimony. He has accurately described the layout of the sacristy -- a room he had only ever entered the day Pell molested him, the lawyers argue.

"The evidence given by the complainant was not only plausible, it was credible, clear and entirely believable as is reflected in the jury's verdict," the prosecutors' submission said.

If the appeal judges rule that the verdict is unsafe on the evidence, Pell would by acquitted and would not have to be retried.

Pell's lawyers have also argued that the trial judge erred in not allowing them to use a video graphic in their closing address. They said the graphic would demonstrate that the crimes that were alleged would have been impossible.

A third ground details an alleged "fundamental irregularity" in the trial in that Pell was not arraigned -- asked if he pleaded guilty or not guilty -- in front of the chosen jury.

A victory on either of those grounds could result in Pell being retried. But he would likely be freed on bail until his third trial.