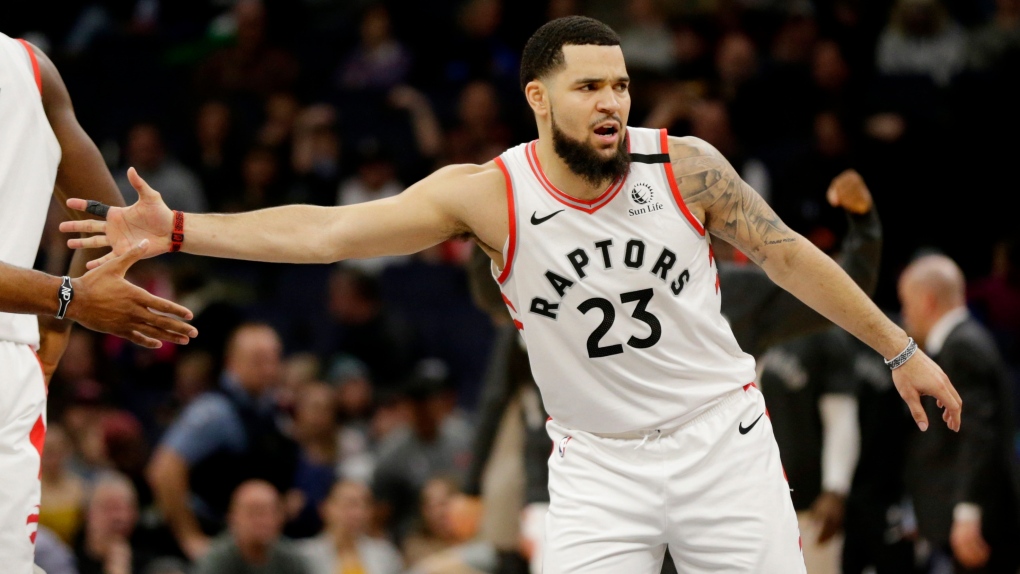 MINNEAPOLIS -- Fred VanVleet returned from a hamstring injury to score 29 points and the Toronto Raptors beat the Minnesota Timberwolves 122-112 on Saturday night.

Kyle Lowry added 28 points and seven assists while Norman Powell scored 20 points off the bench for the Raptors, who have now won three straight games.

Minnesota's Andrew Wiggins recorded his first career triple-double. He had 18 points, a career-high 11 assists and 10 rebounds. Rookie Jarrett Culver had 26 points for the Timberwolves, who have lost five straight.

VanVleet's injury sidelined him for five games before Saturday. He was 11 of 16 from the field and 7 of 8 from 3-point range in 28 minutes.

Toronto took a five-point lead into the fourth quarter thanks in large part to Lowry's efforts in the third. Lowry scored 17 points in the quarter to erase a four-point halftime deficit.

The Raptors pushed the lead to as many as 22 in the fourth. Serge Ibaka and Norman Powell each had six points off the bench during a 21-6 stretch to open the period.

Saturday was the second night of back-to-back games for both teams. Toronto beat Washington 140-111 on Friday, while Minnesota lost 116-114 at Indiana.

Minnesota got big first quarters from Wiggins and Culver. Wiggins had 11 points on 4-of-4 shooting and added five assists in the quarter. Culver led Minnesota with 14 points in the first, including 4 of 6 from deep.

Timberwolves centre Karl-Anthony Towns had 12 points in the first half but was held scoreless after halftime.

Raptors: Coach Nick Nurse grew up in Carroll, Iowa, and was initially planning on a big group of family members making the 4-hour drive to Minneapolis. But those plans were thwarted by a snowstorm Friday night. "There were at least one or two buses coming up from my hometown and that all got cancelled," Nurse said. ΓÇª Pascal Siakam and Marc Gasol both picked up technical fouls with 1:01 to play in the first half.

Timberwolves: G Allen Crabbe was inactive Saturday with an illness. Minnesota acquired Crabbe on Thursday in a trade with Atlanta that sent Jeff Teague and Treveon Graham to the Hawks. Culver topped 20 points for the fourth time this season.