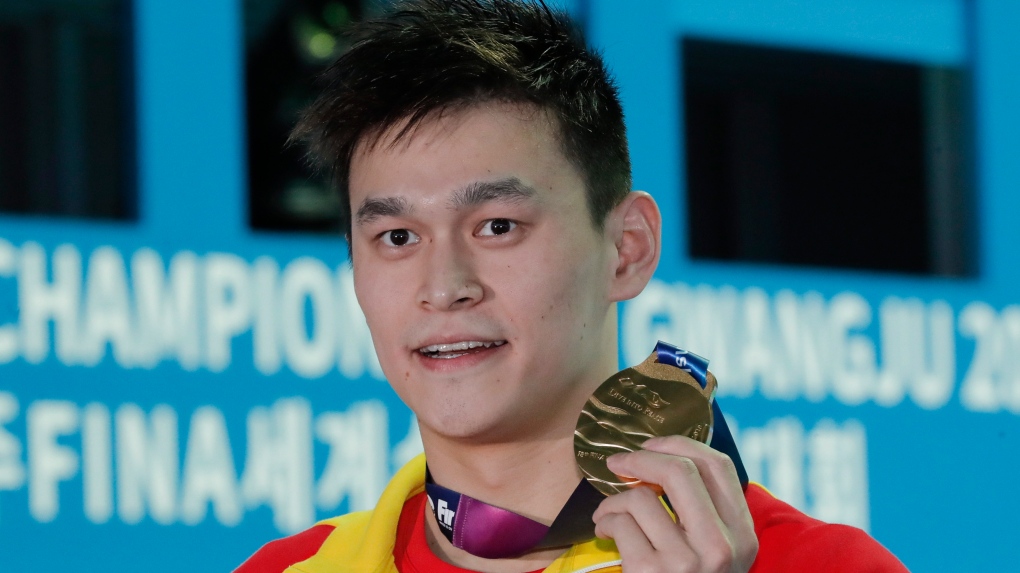 GWANGJU, Korea, Republic Of -- Sun Yang was in the middle of controversy at the world swimming championships again. Only this time, it wasn't his doing.

Sun won the 200-metre freestyle on Tuesday night after Danas Rapsys of Lithuania finished first and got disqualified for an apparent false start.

The Chinese star touched second, but got elevated after Rapsys had already celebrated in the pool.

Sun appeared surprised, clasping his hands to his face, but quickly sat on the lane rope and raised both arms in the air as a mix of cheers and boos rang out.

Sun, the current Olympic champion in the 200 free, earned his third straight medal in the event at worlds and second gold in a row.

Once again, Sun got shunned by a competitor on the medals podium. Scott kept his hands behind his back and refused to shake Sun's hand, standing off on his own while the other medallists joined Sun to pose for photographers.

Sun, who served a three-month doping ban in 2014, is being allowed by FINA to compete in Gwangju ahead of a Court for Arbitration in Sport hearing in September that threatens Sun's career.

Sun has been accused of smashing vials of his blood with a hammer during a clash last year with testers, and faces a lifetime ban if found guilty.

Sun appeared to gesture at Scott on the podium and again after they walked off. Sun and the other two medallists stopped for photographers on the pool deck, but Scott kept on walking.

After Sun won the 400 free, silver medallist Mack Horton of Australia refused to step on the podium or acknowledge Sun during the medals ceremony. FINA, swimming's governing body, sent warning letters to Swimming Australia and Horton for his actions.