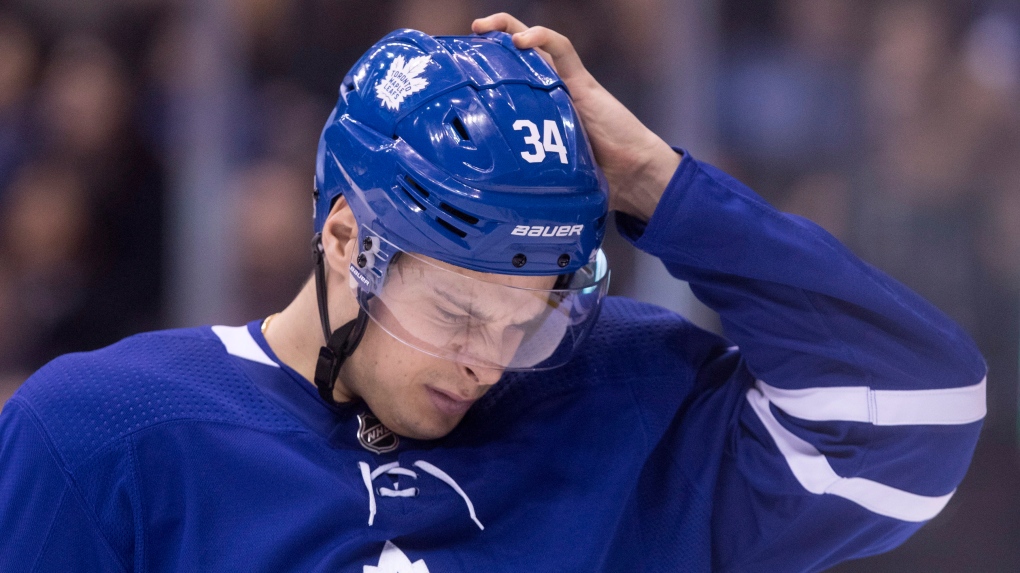 ANNAPOLIS, Md. -- Auston Matthews continues to make progress as he works to return from an apparent shoulder injury.

The Toronto Maple Leafs' outdoor game against the Washington Capitals on Saturday night at Navy is the fourth consecutive game Matthews is missing since injuring his right shoulder Feb. 22 against the New York Islanders.

The team has only termed Matthews day to day, which for coach Mike Babcock typically means a player being out 10 days and getting evaluated, but the 20-year-old centre could reasonably return as soon as March 10 against the two-time defending Stanley Cup-champion Pittsburgh Penguins.

"He's skating every day, working hard on his conditioning," Babcock said. "The big thing about this injury: you have your legs. When you come back from the previous injury, you don't have any legs because you didn't do anything. I think jumping right in and being ready to go when it's time to come back will be positive for him. He won't have to get his conditioning back. He'll have it back already."

Matthews missed four games in November with a suspected back injury and six in December with a concussion. Despite playing just 53 games, the Phoenix area native leads Toronto with 28 goals and is second in points with 50.

Going into the Maple Leafs' game against the Capitals at Navy-Marine Corps Memorial Stadium, they're 7-4-2 this season without Matthews.

"It shows you how deep the team is, how talented it is and how guys are ready to step up when other guys are out of the lineup," veteran forward Patrick Marleau said. "We'd love to have our full lineup, have Auston in there, but everybody tries to pick up the slack when he's not."

When Matthews returns after missing at least Toronto's game Monday at Buffalo, the Maple Leafs will boast depth down the middle with him, Nazem Kadri, Tyler Bozak and Tomas Plekanec. The fourth line of Plekanec -- acquired at the trade deadline from rival Montreal -- with Leo Komarov and Kasperi Kapanen sets the Maple Leafs up well for the stretch run and playoffs.

"It doesn't matter who you play against," Babcock said. "We miss our matchup and they can go next and however. That's important."