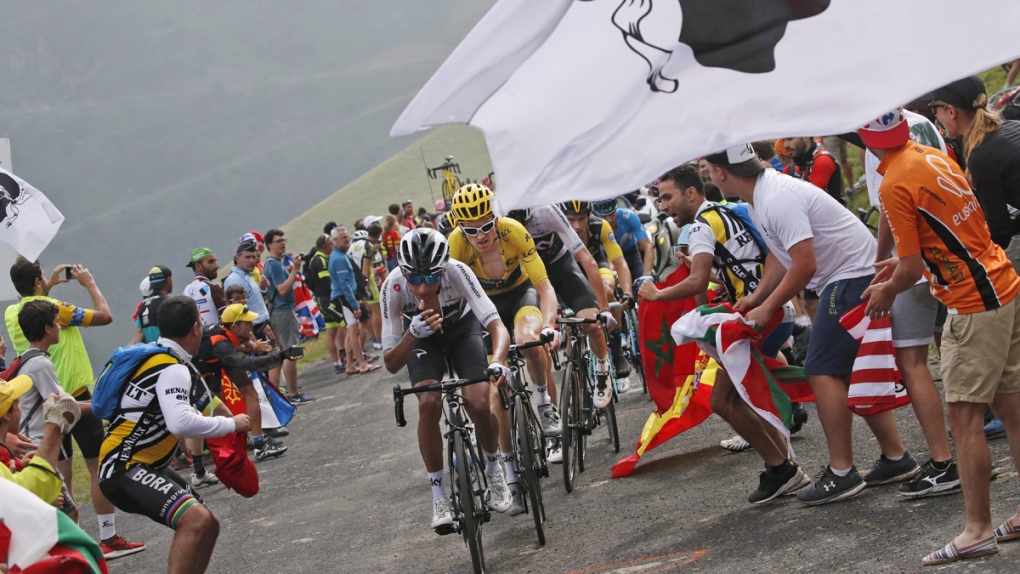 PARIS -- With each crank of their pedals, riders on the Tour de France will climb ever-higher into the unknown.

For the first time in its 116-year history, the race that starts Saturday features three stages that finish on mountain climbs to above 2,000 metres. The unprecedented assault on altitude will likely prove decisive in deciding the Tour winner.

The thinning mountain air, with scarcer oxygen, will trigger a cascade of physiological reactions, right down to the cellular level, in the riders' aching bodies and sap their strength as they fight to not get left behind amid the peaks of the Pyrenees and Alps.

Their lungs will heave, breathing harder and quicker to try to compensate for the falling air pressure. Their hearts will pump faster, to increase flows of oxygen-carrying red blood cells to the lungs so they can pick up more of their precious cargo and rush it urgently to straining muscles.

The bowls of pasta the riders wolfed down and the energy gels they'll carry with them on the road will be burned through more quickly as their bodies work ever-harder to break down the carbohydrates and sugars, to power them up steep inclines on barren slopes too high and inhospitable for trees to grow.

And in the process of churning out energy with less oxygen, their cells will spit out greater amounts of lactic acid, stinging and burning their muscles and interfering with their ability to keep those pedals turning.

"When you ride over 2,000 metres, you definitely feel the difference, compared to, say, 1,000 or lower," 2018 Tour champion Geraint Thomas told The Associated Press as he trained last month for his title defence.

"You just can't do the same powers that you do at sea level," he said. "It is just like a thinner sort of air, really, up there. You can just tell, like, when you're breathing, you're just not getting quite as much oxygen in the lungs as you normally would."

By going extra-high at this Tour, organizers hope to avoid a formulaic race and keep the identity of the eventual winner uncertain for as long as possible, perhaps all the way to the end of the Alps, on the last day before the Tour rolls into Paris on July 28.

The last two mountain stages, to the Alpine ski stations of Tignes and Val Thorens, feature back-to-back grueling uphill finishes to above 2,000 metres. The other high-altitude uphill finish is on Stage 14 in the Pyrenees, climbing to the Tourmalet pass, at 2,115 metres (6,939 feet).

"It will be tough, especially the last two days of the Tour," Thomas said. "Everyone is going to be tired then anyway, so that could emphasize the differences."

Organizers say their pursuit of altitude is also a celebration of this year's 100th anniversary of the Tour's iconic "maillot jaune," the canary-yellow jersey worn by the race leader. The jersey was introduced in 1919, at the 13th Tour and the first after World War I, to make the race leader more readily identifiable. Its first bearer was French rider Eugene Christophe.

"We'll go very high this year, often above 2,000 metres. Why? Because it's the centennial year of the yellow jersey, because the yellow jersey represents excellence, and because excellence elevates us," Tour director Christian Prudhomme said in an interview with AP .

To prepare, riders have trained at altitude. Romain Bardet, a podium finisher in 2016 and 2017, did repeated ascents in the Sierra Nevada mountains of southern Spain. Thomas went to the Canary Islands off the coast of northwest Africa to acclimatize himself on roads around the Teide volcano that rises to 3,718 metres (12,198 feet).

But even the best-acclimatized riders won't be as strong at altitude as they are at sea level.

Gregoire Millet, a sports scientist at Lausanne University in Switzerland who studies altitude's effects on athletic performance, estimates the amount of pedal-power riders produce will drop by about seven per cent for every 1,000 metres (3,280 feet) they climb and that at the summit of this year's Tour, on the Alpine Iseran pass at 2,770 metres (9,088 feet), their power output could decline by as much as 25 per cent.

To incentivize riders to push through their pain, Tour organizers are tangling carrots on some of the toughest climbs, in the form of time bonuses. The first rider to the top of the Galibier, for example, will get eight seconds shaved off his time. So will the first to summit the Iseran, the highest road pass in the French Alps that hasn't been climbed by the Tour for 12 years.

The bonuses "will have a real impact," Prudhomme said. "I'm convinced that it can work to incite the riders to attack, to dare in the climb and not wait until the last moment."

But push too hard, and riders' bodies could push back to protect them from over-exertion, possibly starting to direct blood away from muscles to slow them down, says John Dickinson, a sports scientist at the University of Kent in England who specializes in respiratory problems among athletes.

"It's actually quite clever. In fact it senses how hard you're working. It takes in all this information about how much waste product the muscles are producing and that starts to give off warning signs for the body," he said in a phone interview.

"You get to the point where the body says: 'We can't go any faster, because if we do we're at risk of sort of pressing the self-destruction button."'