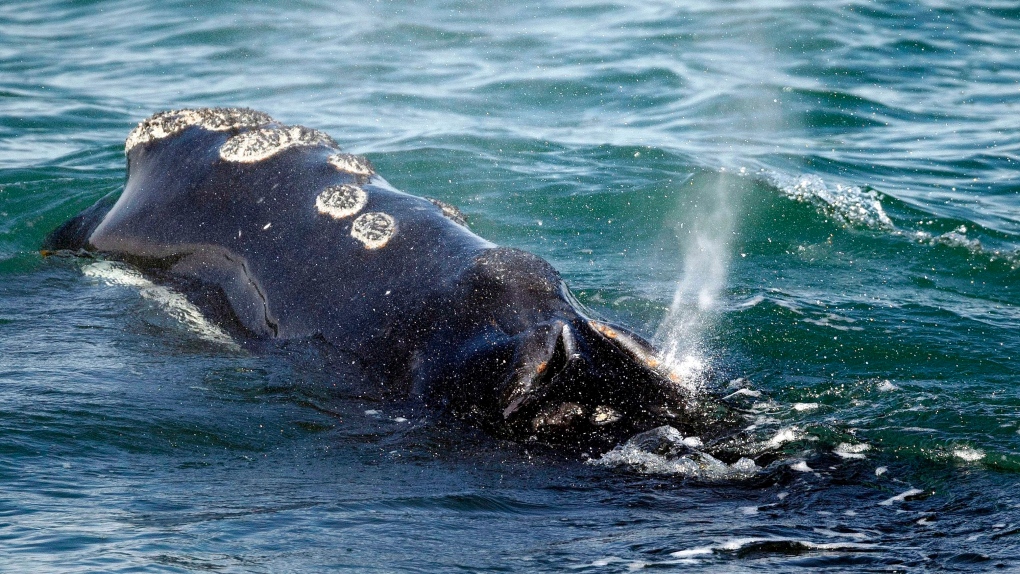 A North Atlantic right whale feeds on the surface of Cape Cod bay off the coast of Plymouth, Mass. on March 28, 2018. THE CANADIAN PRESS/AP, Michael Dwyer

A news release from the Department of Fisheries and Oceans said search and rescue operations for these whales in the Gulf of St. Lawrence resumed on Tuesday after "several days" of challenging weather conditions.

"Two of the three whales were spotted and rescuers worked to disentangle both those whales," it said.

The whale known as number 4423 was spotted around 11 a.m. during an aerial surveillance flight, with the statement adding that this whale had been partially disentangled last Thursday when rescue efforts had to be paused because of darkness.

On Tuesday, the rescuers were able to make additional cuts to the gear the whale is entangled in, although they weren't able to completely free the mammal.

"These additional cuts appear to have shifted the gear configuration on the whale, which could mean it is lightening up," the statement said.

Later Tuesday afternoon around 4:45 p.m. another whale known as number 4440 was seen.

Campobello Whale Rescue Team, which is one of the organizations assisting with the rescue efforts, was able to cut away the rope running from the whale's mouth to its tail, although it was not possible to completely remove the gear.

"The animal had rope around its peduncle, or tail stock, and appeared to be dragging something heavy," it said.

The next step for both these whales will be to assess, by air, how the entanglement configuration has changed after Tuesday's work, and rescue efforts will resume when weather permits, the release said.

Joe Gaydos with the SeaDoc Society out of the University of California, Davis, said disentanglement can be a slow process and these whales can drag this type of gear for a long time.

A few extra days delay is prudent to ensure the safety of the crew and to make sure that the cuts made by the disentanglement team really help to remove the gear, he said.

Gretchen Fitzgerald, national programs director for the Sierra Club Canada Foundation agreed, adding that the rescuers are doing the best they can.

"It's frustrating. And it's frustrating for those involved but the Gulf is a pretty big place and it can be rough at times and I'm sure that a whale that is entangled is not the easiest animal to deal with," she said.

While she is not sure what these whales are entangled in, historically it has been ropes attached to crab and lobster traps.

In addition to these short-term efforts, Fitzgerald is urging the government to take other steps, including investing additional funds to support the emergency marine mammal response network in their work to help ensure the best possible outcomes for injured and entangled whales.

A statement from various organizations including the Sierra Club Foundation said the authorities also need to have an emergency response task force, comprised of scientists, researchers, environmental organizations, industry groups and government decision-makers to jointly develop adaptive solutions and provide ongoing analysis and response to manage the crisis.

Transport Canada and Fisheries and Oceans Canada have implemented several measures to protect these animals, including increasing surveillance, expanding slowdown zones and changing the rules that trigger fishing shutdowns.

The whales number only about 400 worldwide.

In the last few weeks, six whales have died in Canadian waters and necropsies showed that three of the deaths were due to vessel strikes.

The measures taken to prevent the animals from being hit by ships and getting caught in fishing gear may not be enough to keep them from being hurt or killed in Atlantic waters, said a federal study.

Fitzgerald said there were seven babies born this winter down in the southern area of migration, but if the number of deaths is as high as the number of births, then the population could be in trouble.

"And the level of stress these animals are under... a lot of them have been entangled or had encounters with vessels in their lifetime -- multiple-times," she said.

"The individual animals are suffering and the population is suffering so much."