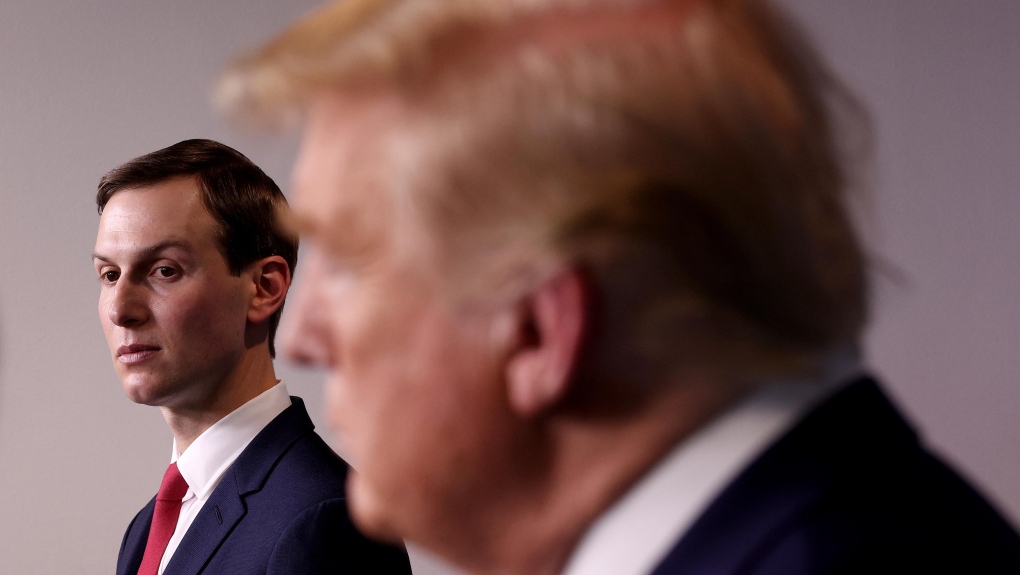 U.S. President Donald Trump's son-in-law and senior adviser Jared Kushner boasted in mid-April about how the president had cut out the doctors and scientists advising him on the unfolding coronavirus pandemic. (Win McNamee/Getty Images/CNN)

U.S. President Donald Trump's son-in-law and senior adviser, Jared Kushner, boasted in mid-April about how the president had cut out the doctors and scientists advising him on the unfolding coronavirus pandemic, comments that came as more than 40,000 Americans already had died from the virus, which was ravaging New York City.

In a taped interview on April 18, Kushner told legendary journalist Bob Woodward that Trump was "getting the country back from the doctors" in what he called a "negotiated settlement." Kushner also proclaimed that the U.S. was moving swiftly through the "panic phase" and "pain phase" of the pandemic and that the country was at the "beginning of the comeback phase."

"That doesn't mean there's not still a lot of pain and there won't be pain for a while, but that basically was, we've now put out rules to get back to work," Kushner said. "Trump's now back in charge. It's not the doctors."

The statement reflected a political strategy. Instead of following the health experts' advice, Trump and Kushner were focused on what would help the President on Election Day. By their calculations, Trump would be the "open-up president."

CNN has obtained audio of two separate interviews with Kushner, which were conducted in April and May as part of Woodward's reporting for his book "Rage." In the wide-ranging conversations, Kushner described the president's relationship with his public health advisers in adversarial terms.

Kushner was also dismissive of party politics, calling the Republican Party, "a collection of a bunch of tribes" and describing the GOP platform as "a document meant to, like, piss people off, basically." Kushner went on to tell Woodward that Trump did a "full hostile takeover" of the Republican Party when he became its presidential nominee.

He also told Woodward, "The most dangerous people around the president are over-confident idiots" and that Trump had replaced them with "more thoughtful people who kind of know their place."

Kushner's comments about the administration's handling of the pandemic underscore the extent to which Trump and Kushner minimized the public health crisis even as it was exploding last spring.

At that time, positive cases in the U.S. regularly crested at around 30,000 per day. On April 15, three days before Kushner's interview, deaths from COVID-19 reached their all-time peak at more than 2,600 per day. And hospitalizations for the virus were at their first peak as well, nearly reaching 60,000 for several days in April. During this period, New York still bore the brunt of the virus, and deadly surges had not yet swept across the South and Midwest.

When asked about CNN's reporting by CNBC on Wednesday night, Dr. Anthony Fauci -- the nation's top infectious disease expert and a member of the White House coronavirus task force -- said it was clear that there had been a "pivot" away from focusing on public health.

"I don't know exactly the timing, but it was clear that some months ago there was a pivot away from complete focusing on public health issues to looking at opening up the country with regard to the economy," Fauci said.

Kushner's comments reflect what many health experts say is at the heart of the administration's flawed approach to the pandemic -- a premature push to reopen the country and sideline medical professionals that led to waves of new infections during the summer and record-setting cases this fall.

"It was almost like Trump getting the country back from the doctors. Right?" Kushner told Woodward on April 18. "In the sense that what he now did was, you know, he's going to own the open-up."

Kushner's comments from six months ago look particularly damning as the U.S. undergoes a fall surge of infections that is again breaking records. The U.S. added 73,240 new cases Tuesday, and a record peak of more than 83,000 cases was reported on Friday.

The rise in cases has been closely followed by an increase in coronavirus deaths.

This month, 11 states reported their highest single day of new deaths since the pandemic began. And though researchers are racing toward a vaccine, it will be months before one is expected to be widely available, and health experts have cautioned that the public needs to take the virus seriously in the meantime.

"If we continue our current behavior, by the time we start to go down the other side of the curve, a half a million people will be dead," CNN medical analyst Dr. Jonathan Reiner said Tuesday.

Since October began, 29 U.S. states have reported at least one record-high day of new cases, according to data from Johns Hopkins University.

BEING A 'CHEERLEADER' FOR THE ECONOMY

Kushner also described for Woodward the political calculations for the president -- instead of coming up with a federal plan to tackle the virus, Trump put that responsibility on governors. In his April 18 interview, Kushner described how he believed Trump had set himself up to reap the political benefits of a successful containment of the virus while ensuring that state governors, and not the president, would be blamed for any failure to stop the spread.

He went on: "But the president also is very smart politically with the way he did that fight with the governors to basically say, no, no, no, no, I own the opening. Because again, the opening is going to be very popular. People want this country open. But if it opens in the wrong way, the question will be, did the governors follow the guidelines we set out or not?"

In a second interview with Woodward on May 8, Kushner insisted that one of Trump's tasks for boosting the economy was to be a "cheerleader." Kushner referred to this as taking care of the "psychology of the market."

"So if you basically say this is coming back in the fall, don't gear up, then people won't rehire, people will stay unemployed," Kushner told Woodward. "And if you're planning for the worst-case scenario, that will become a self-fulfilling prophecy. One of the things that the President's great at is he's a cheerleader. He's trying to make people feel good about the outcome."

The president himself supported Kushner speaking to Woodward for "Rage," according to another audio clip obtained by CNN, calling him "one smart cookie."

"I told Jared to speak to you, and I believe he has," Trump told Woodward on February 19. Trump said he asked Kushner to coordinate with others in the administration "so that Bob can speak to anybody he wants to. Jared will handle -- very capable guy, Jared. You can't get people like this."

In speaking with Woodward, Kushner also expressed contempt for the Republican Party and praised his father-in-law's insurgent takeover of the GOP.

"I say he basically did a full hostile takeover of the Republican Party," he said on April 18. "And I don't think it's even as much about the issues. I think it's about the attitude."

Calling political parties a "collection of tribes," Kushner dismissed GOP activists who help craft the party's platform of policy ideas and aspirations as out of touch with regular voters.

"You know, parties as they grow tend to be more about being exclusive than inclusive," Kushner mused. "And so, you know, you look at, like, the Republican Party platform, it's a document meant to, like, piss people off basically. Because it's done by activists."

Months later, during its national convention, the Republican Party declined to update its platform and instead chose to readopt the 2016 platform.

Kushner's disdain also extended to those administration officials and advisers who had frustrated the president earlier in his term -- people Kushner describes as "overconfident idiots."

"We've gotten rid of a lot of the overconfident idiots," he told Woodward. "And now he's got a lot more thoughtful people who kind of know their place and know what to do."

In "Rage," Woodward writes that he believed Kushner was referring to former Cabinet members and advisers James Mattis, Rex Tillerson and Gary Cohn. In a September interview on NBC's "Today" show, Kushner claimed Woodward "mischaracterized" him and denied he had called those three men "overconfident idiots."