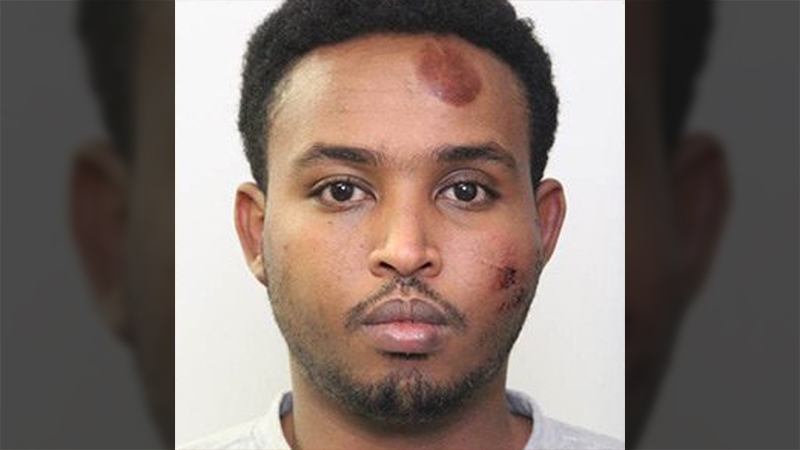 Abdulahi Hasan Sharif is seen in this photo released by Edmonton Police Service.

EDMONTON -- A Crown prosecutor says a man accused of stabbing a police officer and striking four pedestrians with a cube van two years ago wanted to kill them.

Elizabeth Wheaton delivered an opening statement Wednesday to a Court of Queen's Bench jury at the start of a trial in Edmonton for Abdulahi Hasan Sharif.

Sharif, 32, has pleaded not guilty to 11 charges, which include five counts of attempted murder. He is also charged with aggravated assault against the police officer and dangerous driving.

Sharif, who now has dreadlocks, sat in the prisoner's box wearing an orange jumpsuit.

"Once you have heard the evidence, it's the Crown position that you will be convinced beyond a reasonable doubt that Abdulahi Sharif wanted to kill people," Wheaton told the jury.

"He tried first to murder Const. (Mike) Chernyk and then, during an extremely dangerous driving pattern, he fled from police causing bodily harm to four strangers. It is the Crown's position that he intentionally tried to kill these people by hitting them."

Chernyk was on duty outside a Canadian Football League game when he was struck by a vehicle around 8 p.m. on Sept. 30, 2017.

"He noticed headlights coming toward him," said Wheaton. "He heard the sound of a vehicle accelerating. He tried to move out of the way, but it was too late. The vehicle plowed into him."

A number of bystanders came to his aid.

"Suddenly the driver of that vehicle was there -- a black male in dark clothing with a knife," said Wheaton. "He was trying to stab Const. Chernyk in the head with that knife. The bystanders saw the knife and they fled, fearing for their lives."

The officer was left alone and fought for his life, she said. With the man on top of him, Chernyk knew he was being stabbed and tried to grab the attacker's hand.

"But suddenly he could feel the attacker's other hand trying to get to his gun in his holster.

"With one hand still holding off the attack with the knife, he used his other hand and he pushed as hard as he could on that (gun) to keep it safe," she said. "Eventually he was able to roll over and get the other hand.

"His attacker lost the knife and the two got up. Const. Chernyk's attacker then fled into the night."

Wheaton said evidence will show that Sharif was the registered owner of the white Chevrolet Malibu than ran into Chernyk.

A large number of Edmonton police and RCMP were deployed to find Sharif, said Wheaton. About 11:30 p.m., an RCMP officer at a checkpoint pulled over a U-Haul van. As the officer went to check the driver's identification, the van sped off.

"That was the beginning of a dangerous flight from the police that would eventually result in collisions with at least four pedestrians," she said. "These were unsuspecting strangers who were just trying to have a fun night out on the town."

Wheaton said the van hit speeds of 85 km/h through narrow downtown streets, hitting several vehicles and barely missing others, before it was intentionally stopped when a police truck rammed into it and pushed the van on its side.

"(Officers) smashed through the windshield, they pulled him out and they handcuffed him. It was over."

The Crown, she said, will show video from both scenes and call about 40 witnesses.

Sharif is not represented by a lawyer, but attorney Greg Lazin has been appointed to help him and the court by clarifying information or raising potential legal issues.

The trial is expected to last six weeks.