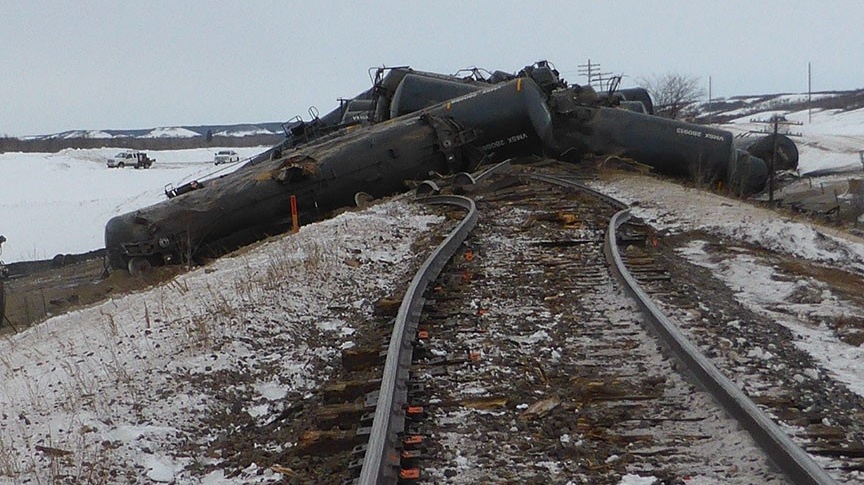 ST. LAZARE, Man. -- CN is still tallying up the amount of oil spilled in a train derailment on a ranch in western Manitoba.

"We are still determining volume estimates at this time," company spokesman Jonathan Abecassis said in an email Thursday.

The Transportation Safety Board has said 37 of 110 railcars went off the tracks early Saturday near St. Lazare. Investigators say the train was rolling east at 79 km/h when it experienced a "train-initiated emergency brake application."

An unknown number of the cars broke open and spilled oil onto a small area on top of deep ice and snow on a pond. Crews have built a berm around the area to contain the spill.

The railcars were new models considered to have better safety features than the cars involved in the 2013 fatal explosion and fire in Lac Megantic, Que.

Abecassis said crews are mixing spilled oil with wood chips that are then hauled away along with contaminated soil. Oil still in railcars is being pumped out and removed for reuse or recycling.

"Additional excavation and clean backfill will be completed once the snow melts to ensure the site is returned to its original conditions," he wrote.

The Manitoba government has said there is no danger of the oil entering the nearby Assiniboine River.

Jayme Corr, who has 250 cattle on almost 1,000 hectares of land which includes the spill site, has said he is depending on the cleanup because he uses the pond to water his cattle in the summer.

Abecassis said soil samples from outside the affected area will be used to set baselines for the cleanup.

"We will also be conducting surface and ground water sampling to ensure that there was no further contamination."