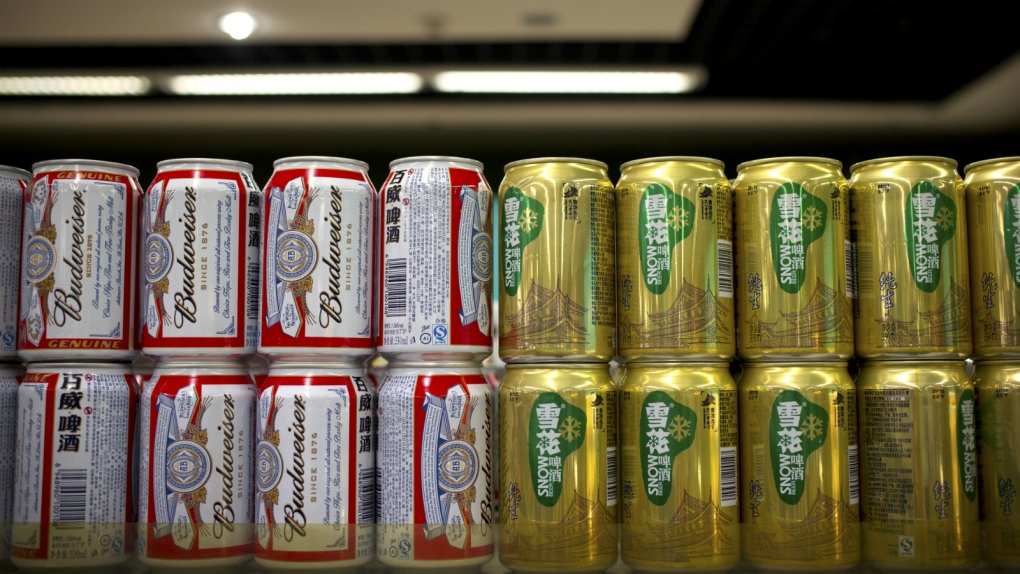 Cans of Budweiser beer, owned by AB InBev, sit next to cans of Snow beer, in which SABMiller has a 49 per cent ownership stake, on a grocery store shelf in Beijing on Thursday, Oct. 15, 2015. (AP / Mark Schiefelbein)

LONDON -- Budweiser maker Anheuser-Busch InBev increased its cash offer for SABMiller to 45 pounds ($58.98) per share to blunt a revolt by investors who had seen the relative value of their payout plummet as the pound declined following Britain's vote to leave the European Union.

AB InBev on Tuesday sweetened its bid by one pound a share to appease smaller investors who complained that they were now receiving less for their shares than SABMiller's two biggest shareholders, who were offered a cash-and-share deal. The new offer values the transaction at 79 billion pounds.

SABMiller's board in November accepted, in principle, a merger that seeks strength in size, combining the world's two largest brewers into a company that would control nearly a third of the global market.

But AB InBev shares, which are denominated in euros, have risen 3.2 per cent since then and the pound plunged against the European currency after the referendum on Britain's exit from the EU. That reduced the value of the cash offer compared with the cash-and-stock option tailored for U.S. tobacco company Altria and BevCo, an investment vehicle of the Santo Domingo family, which together own about 40 per cent of SABMiller and wanted to remain shareholders of the new company.

Aberdeen Asset Management, whose stake in SABMiller is in excess of one per cent, on Tuesday made plain its unhappiness with both the new cash offer and the overall situation. The offer undervalues SABMiller and favours the company's two biggest shareholders, the firm said.

"The revised deal remains unacceptable," it said in a statement.

Aberdeen Asset Management said it had engaged with SABMiller's board on the "differential" treatment of shareholders and that the way that the "value of the partial share offer has diverged from the cash offer has compounded our discomfort."

"Altria and BevCo should not be able to vote on the cash offer as they are inherently conflicted by their future stakes in AB InBev if the deal completes," Aberdeen said. "We believe the board's only choice is to treat Altria and BevCo as a separate class of shareholders and would urge them to make a public statement to this effect."

Aberdeen indicated it was willing to give up on the deal: "In the absence of an improved offer we would be more than happy to remain committed long-term shareholders in SABMiller."

Another firm, U.S. hedge fund Elliott Management had written to the SABMiller board to express concern last week, the Financial Times reported.

Analysts like Jonny Forsyth of Mintel say it's unlikely that the deal might get derailed, as AB Inbev or SABMiller are deeply committed. They have already restructured their operations, selling many brands around the world, to ease regulators' concerns about their new company's market dominance.

"They are very invested in making this work," Forsyth said.

SABMiller said in a statement that its chairman and his counterpart at AB InBev spoke last week about the exchange rate volatility and market movements, but that there had been no "discussion or agreement" about the revised offer.

The SABMiller board confirmed it hired Centerview Partners to provide additional financial advice. It said it will consult with shareholders and meet to review the revised offer, after which it will make an announcement.

AB InBev has received regulatory approval for the deal in a number of jurisdictions, most recently in the United States. Regulators in China have yet to offer their view.

RBC Capital Markets analyst James Edwardes Jones described the people who were agitating as being "relatively small shareholders," and that there would not be further increases to the pot.