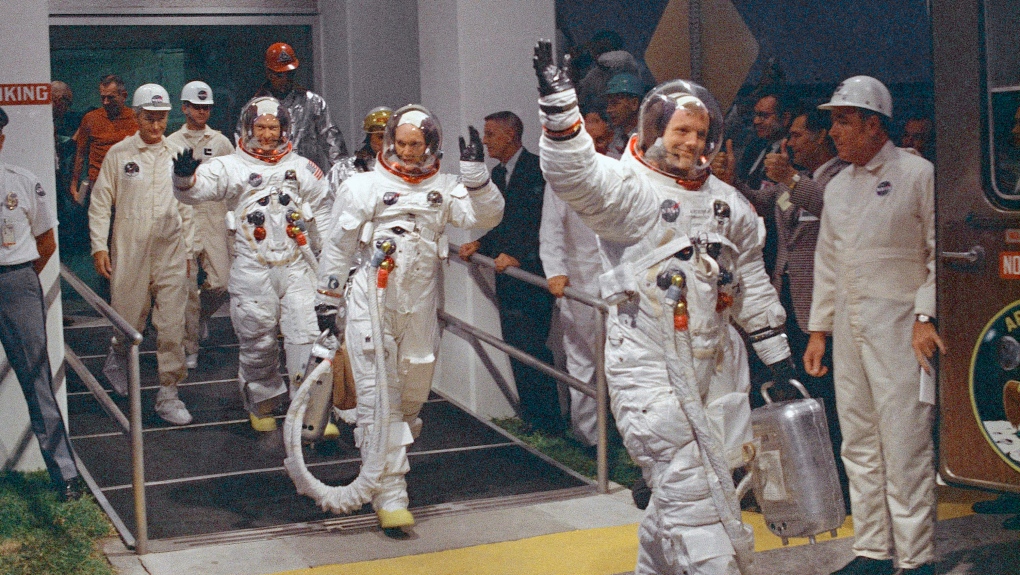 In this July 16, 1969, file photo, Neil Armstrong waving in front, heads for the van that will take the crew to the rocket for launch to the moon at Kennedy Space Center in Merritt Island, Fla. (AP Photo/File)

Thousands of souvenirs that Neil Armstrong saved over the course of a career that saw him become the first man to walk on the moon will be auctioned off this week.

Nobody really knew the extent of the stuff Armstrong amassed during his 82 years on earth, not even the children of the man who made history with his feat on July 20, 1969. Some of the mementos are from his space missions.

Armstong's offspring found the treasures after he died in 2012, tucked away at his house or that of their mother, his ex-wife.

Some have historical value, such as flags or medallions he wore during the Apollo 11 lunar mission. Others do not -- like a boy scout cap or a pin from his high school football team.

"He just kept everything. He didn't throw things away," his son Rick said.

Rick and brother Mark decided to spread out the rest of the collection.

More than 2,000 lots will be auctioned off Thursday and Friday in Texas, and then again in May and November of next year.

The crown jewel will be a US flag that was taken along during the Apollo 11 flight to the moon, although it was not placed on its surface. It is bigger than the usual US flag. It is estimated at US$75,000 by Heritage Auctions, which is organizing the sale, which also will be held online.

"He did keep all the things that were flown on Apollo 11. He kept them all together," said Armstrong's younger son, Mark. "It was fortunate because it made it easier for us to identify those items."

The brothers were in the dark about many of these souvenirs of their father, who displayed only a fraction of them at his house, perhaps to avoid overwhelming them with his achievements.

"His normal manner was to downplay things but particularly with us," said Rick Armstrong. "My mom and dad put a lot of attention on just trying to keep us as a normal family and not to be affected by all this stuff."

The brothers plan to set up a foundation and donate part of the proceeds from the auction to a variety of organizations.

The souvenirs mean a lot to them but their memories of their father mean even more.

"The memories are the most important and the values and the lessons that we learned from our parents. Those are the things I think that we value most," said Mark Armstrong.