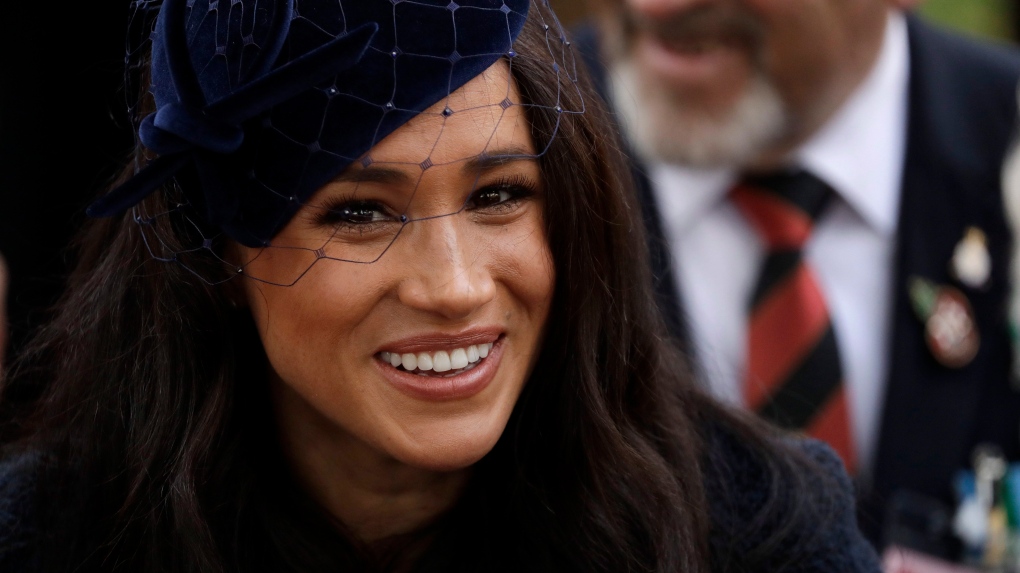 Meghan, the Duchess of Sussex, meets veterans and serving members of the military as she attends the official opening of the annual Field of Remembrance at Westminster Abbey in London, Thursday, Nov. 7, 2019. (AP Photo/Matt Dunham)

It seems the ever fashionable Duchess of Sussex is not losing sight of her Canadian connection -- Meghan has been spotted wearing jewelry by Canadian designer Suetables, the latest example of the royal repping Canada.

Designer Suetables posted to their Instagram on Wednesday that Meghan was wearing charm necklaces that represented Prince Harry and their baby Archie.

“We are thrilled she chose to keep her loved ones close to her heart by wearing @suetables,” the brand wrote.

The post said that Meghan was wearing some of the brand’s zodiac charms, which are sold separately from the necklace chains. The two charms together retail for less than $100 in silver, but a gold version of one of the charms costs just under $80 alone.

The photo of Meghan wearing the jewelry comes from earlier this month, when she and Prince Harry met with family members of deployed army personnel.

Suetables was started by Sue Henderson and has two stores in Toronto and one in Montreal. The jewelry is designed, assembled and hand stamped in Toronto. The silver they use comes from artisans in Mexico, according to Suetables’ website, which says they “work with partners who enforce environmentally safe working conditions and utilize environmentally responsible technologies.”

The Duchess of Sussex, Meghan Markle, wearing our 'Shirley Zodiac’ to represent Prince Harry and a 'Vanessa Coin Zodiac' to celebrate baby Archie. We are thrilled she chose to keep her loved ones close to her heart by wearing @suetables ♥️ #suetables #wearcanadaproud (ph: Getty Images)

In an email to CTVNews.ca, Henderson said the company and her have always been "big" fans of Meghan, praising "her poise, style (and) support of women empowerment.

"In a world of so many big global brands, we are honoured that The Duchess is choosing to wear necklaces from a small independent Canadian company," Henderson said. "We have had a huge response so far ... and we are thrilled that a whole new set of people are finding us and celebrating loved ones with our jewelry."

Meghan lived in Toronto for many years while filming the TV series “Suits,” and has shown her support for Canadian designers frequently in the past.

She chose an ivory belted coat by Canadian knitwear designer Line the Label to wear out during the photo-op for her engagement to Prince Harry.

In their first joint public appearance since the announcement of their engagement, Meghan wore a navy double-breasted wool coat by Montreal-based outerwear label Mackage to a charity event for World AIDS Day in November of 2017.

Canadian fashion designer Bojana Sentaler sold out of a coat that Meghan wore at Christmas in 2017.

On another occasion, the duchess wore a sleeveless trench dress by the Calgary brand Nonie to an event in July of 2018.

Yesterday, The Duke and Duchess surprised their neighbours in Windsor at a coffee morning for military families in a community centre located in the heart of the Army housing estate. Every year during the month of November we pause to remember and honour all those who have served their country here in the UK, across the Commonwealth and around the world. Their Royal Highnesses also wanted to show support for the families of service personnel who are currently deployed overseas. As we lead up to Remembrance Sunday, The Duke and Duchess of Sussex will join Her Majesty The Queen and other Members of the Royal Family at various commemoration events, including the Festival of Remembrance at the Royal Albert Hall and the Cenotaph. During the visit yesterday, Their Royal Highnesses met with young families who shared their experiences as parents and as couples who are often apart from their loved ones for months at a time. A reminder that a life of service does not simply describe the person wearing the uniform, but the entire family. #Remembrance #Lestweforget