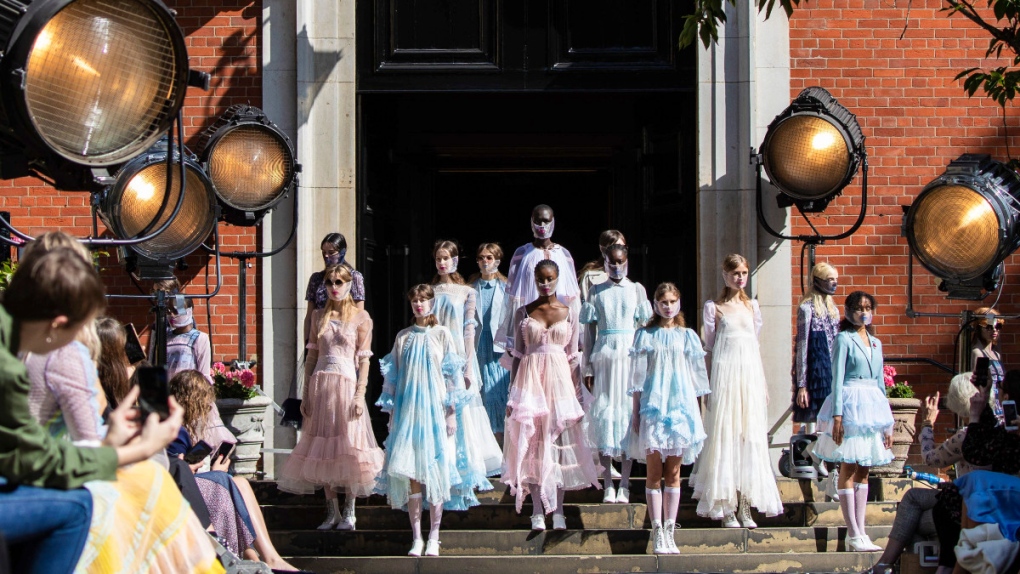 LONDON -- It's the September fashion week season, and in any other year London would be abuzz with fashionistas zipping across town in Mercedes Benzes, hobnobbing with celebrities at glittering catwalk shows before sipping champagne at late-night parties.

This is no typical year, though, and London Fashion Week is decidedly less glamorous. There are all of three socially-distanced catwalk shows, with a smattering of small salon shows or invitation-only appointments offered by designers like Victoria Beckham and Christopher Kane. International buyers, editors, and models aren't jetting in.

With most designers showing their wares online only, style in the COVID era is largely limited to streaming fashion shows on an iPad from the couch - probably with slippers in place of stilettos.

The luxury brand Burberry, which usually hosts a packed runway show complete with a red-carpet reception for A-list celebrities, decamped its models to a forest clearing Thursday for a live-streamed show with no catwalk or physical audience. Burberry shared its blend of performance art and fashion with some 42,000 viewers via Twitch, the streaming service for online gamers.

"This is not a full-blown fashion week - it's not mass audiences. It's very much happening in private and the scales have tipped in favour of digital," said Caroline Rush, chief executive of the British Fashion Council, which organizes London Fashion Week.

Still, she said, it's a step forward - albeit a small and tentative one - for the industry to regain some semblance of "the life we were living before."

The fashion industry has been hit hard by the coronavirus pandemic, and in Europe, where countries are seeing an alarming new surge in cases, few consumers are in the mood to buy luxury bags and dresses. Nor are they likely to resume spending to pre-pandemic levels any time soon, with weddings and parties largely cancelled and big parts of the workforce staying at home. Forecasts by analysts predict global luxury goods sales could drop by 20% to 35% this year.

Many say that has forced a sharp rethink about how the business works. That includes questioning how the traditional calendar of biannual fashion weeks - always staged across New York, London, Milan and Paris - is organized, and how to leverage new technologies instead.

While the glitzy trade events are key for designers to connect with global retailers and consumers, some critics say the relentless pace of fashion weeks generate an unnecessarily huge carbon footprint - and contribute to an unsustainable cycle of over-production.

Even before the virus outbreak, brands had been experimenting with technology to get to broader audiences by streaming shows online. In the same way that companies in other sectors are wondering whether employees will return to offices after the pandemic, the fashion industry is questioning whether there is even a place for models strutting up and down runways.

Imran Amed, founder of the influential trade news website Business of Fashion, thinks that while there is no replacing the atmosphere of an in-person show, virtual or augmented reality will play an increasing role. Virtual reality provides an immersive 3D experience, whereas augmented reality overlays digital images on a viewer's surroundings, so that a model might be seen walking through their living room.

"For people to, say, experience a Burberry show or a Prada show or a Vuitton show in their homes using augmented reality, with the ability then to pre-order some of the things they've seen - that's where I think there may be some opportunity," Amed said.

"I don't think we'll completely get rid of fashion weeks, but at the same time I think there will be new ways of showing clothes that we haven't really seen yet," he added. "I just don't think we need as many shows, in as many cities, for as much of the time of the year."

Designer Gareth Pugh, who hasn't appeared on the London Fashion Week roster for two years, said it was an exciting time to return and stage a multimedia fashion exhibition he called "The Reconstruction" because the usual rules are out the window.

The exhibition at London auction house Christie's showcases 13 designs that appear on mannequins, in art photographs and in a documentary. Fittingly, one of the looks features long, sinister beaked head coverings harking back to the plague masks worn during the 17th century.

Pugh is known for experimenting with fashion boundaries: his dramatic and sculptural styles, worn by the likes of Lady Gaga and Nicki Minaj, have never been geared toward the whims of the commercial market, and he ditched the runway for artsy fashion films to showcase his creative vision years before anyone did.

The pandemic is a moment for "creative problem-solvers" who are willing to bend the rules to step forward, he said.

"Right now when those established ways of doing things is questioned, and are impossible to actually implement anymore, we have to reinvent," he said. "You don't have to do what everybody else does. You don't have to get 400 people in one room and show your work in that way."