'Don't touch the marble': visiting the Taj Mahal in a pandemic 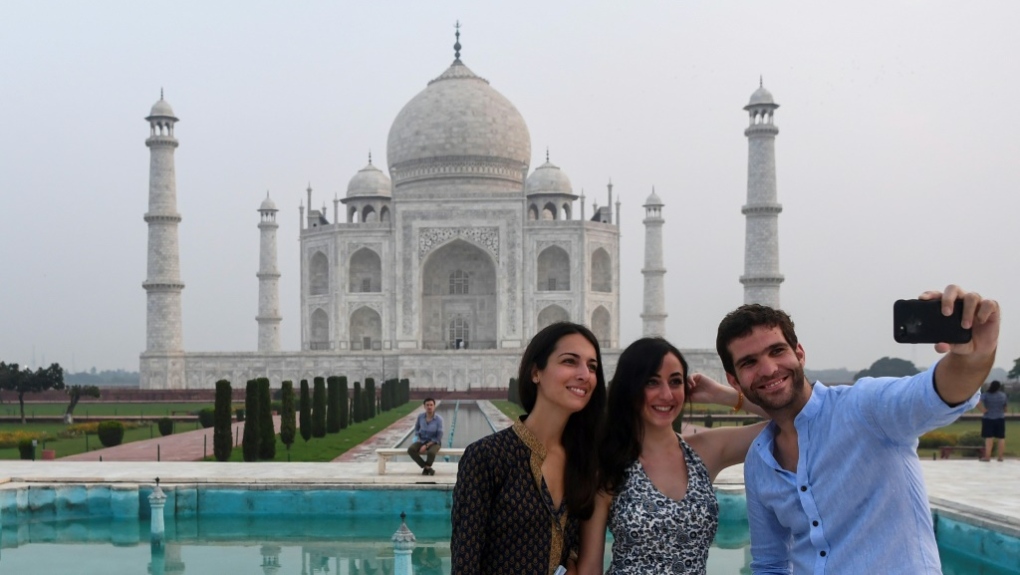 Visitors to the Taj Mahal are reminded to put their masks back on once they have taken the obligatory selfie. (AFP)

AGRA, INDIA -- From Princess Diana to U.S. President Trump, everyone wants to visit the Taj Mahal, but in the middle of a global pandemic the bucket-list experience is just a little less special.

As India's "monument to love" re-opened on Monday after a six-month hiatus, special rules were introduced -- including no touching the white marble walls of the mausoleum built for a Mughal emperor's favourite wife.

Only 5,000 visitors are allowed daily -- a quarter of usual capacity -- and all have their temperature taken by staff wearing face shields, masks and gloves.

Visitors can whip off their masks for a photo, but security personnel are quick to remind them to put them back on once the shutter has been pressed.

And the famous bench where people usually sit to have their picture taken has been laminated in plastic, to help cleaning between every photo op.

"We have all the safety measures in place," said Vasant Swarnkar from the Archaeological Survey of India (ASI), which oversees the UNESCO world heritage site in Agra south of New Delhi.

"We want to send out the message that things are not so bad and you will be safe if you follow the instructions."

Neither the new rules nor the dangers of catching the coronavirus put off a steady stream of visitors to the breathtaking 17th-century monument on Monday morning.

"The moment I heard the Taj is re-opening I decided to visit. I had been planning it for so many years," said engineer Debargha Sengupta, 25, who took a train from Allahabad 500 kilometres away.

"It's amazing, it's incredible. I had read about the Taj in books and seen the pictures but to see it in real is so amazing," he told AFP.

"I am not worried about the coronavirus. It's been six months and I am totally fed up now. We cannot sit at home forever."

The return of visitors is a huge relief to the many people of Agra who depend on Taj Mahal tourists for their livelihoods.

"It was so frustrating to sit idle at home for six months," said an elated Zahid Baig, a rickshaw driver.

"Agra looked like a ghost city without the Taj tourists," he said.

The re-opening comes as the Indian government seeks to get Asia's third-largest economy moving again even as virus cases surge.

So far it has recorded more than 5.4 million coronavirus cases -- second only to the United States, which it could overtake in the coming weeks.

'WE HAVE TO GET USED TO IT'

A lockdown imposed in March left tens of millions out of work almost overnight, while the economy shrank by almost a quarter between April and June.

"People have suffered a lot and it is time the country opens up fully," said bank official Ayub Sheikh, 35, visiting with his wife and baby daughter.

"We are not afraid of the virus. If it has to infect us, it will," he told AFP.

"Not many people are dying now. I don't think it is going to go away soon. We have to get used to it now."

There were few foreigners present Monday as India has not yet opened up to international tourists.

But Spaniard Ainhoa Parra -- who lives in India -- did make the trip.

"Coronavirus is in every country," Parra told AFP after posing for a selfie with her husband and two friends.

"We have to be careful, but if we have to get infected we will."

The allure of the monument, commissioned around 1630 by Mughal emperor Shah Jahan for his wife Mumtaz Mahal, looks set to endure.

"Taj has a magnetic effect on people. They are crazy about it," said ASI's Vasant.

"Everyone wants to visit it at least once in their lifetime."