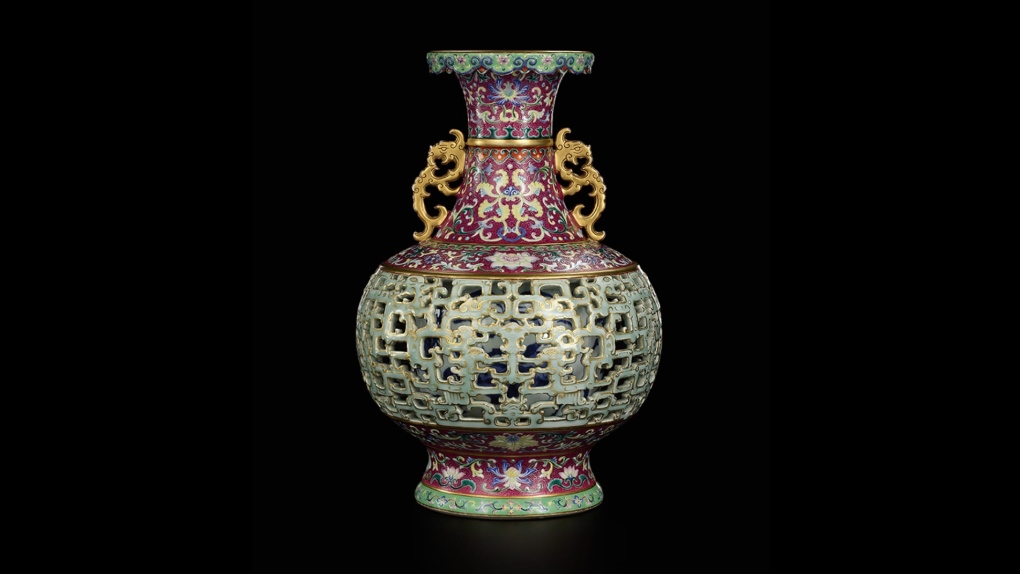 The rare vase made specifically for China's Qianlong Emperor in the early 1700s went under the hammer on Saturday, selling for 70 million Hong Kong dollars. (Sotheby's)

TORONTO -- An 18th-century Chinese vase, once sold at auction for just $75, has sold for more than $12.2 million after being discovered in an elderly woman's European country home.

Described by Sotheby's as a "lost masterpiece," the rare artifact made specifically for China's Qianlong Emperor in the early 1700s went under the hammer on Saturday, selling for 70 million Hong Kong dollars.

China's Qianlong Emperor ruled for more than 60 years and reportedly praised the vase as a "masterwork."

According to Sotheby's, the vase was rediscovered by Amsterdam-based art consultant Johan Bosch van Rosenthal in an elderly women’s home after she called him to inquire about assessing her collection.

In a video posted to the auction house's YouTube channel, Van Rosenthal said the dust-coated vase was in almost-pristine condition after nearly 60 years, despite being kept in a room surrounded by the owner’s cats and dogs.

"We reached a room with a number of Chinese works of art inherited many years ago. Her four cats walked around freely among these. She pointed out a ... partly gilded Chinese vase on a cupboard -- a cherished object which she knew to be something special and valuable," Van Rosenthal said.

Van Rosenthal said he is not an expert in Chinese art and sent pictures of the vase to Sotheby's experts who were able to match it to an item in the Chinese imperial archives belonging to the Qing dynasty.

According to the archive record, the vase was previously kept in the Palace of Heavenly Purity, part of Beijing's Forbidden City.

Van Rosenthal said the vase is "highly unusual" given its design in which a blue-and-white floral pattern is visible through the object's lattice shell, giving it a “double-walled" appearance.

Sotheby’s said the vase is similar to only a handful of other designs attempted under China's imperial kiln supervisor Tang Ying in the years 1742 and 1743, describing the object as a "technical tour-de-force." The auction house said the pear-shaped vase is an example of "yangcai" style, also known as "foreign colours," that saw artisans incorporate Western-style enamels into their porcelain work.

Sotheby's records showed that the artifact -- known as the Harry Garner Reticulated Vase for its original collector -- was sold through its London auction house in 1954 for $75 (£44). Records also showed that the vase was sold again later that year for $136 (£80).

"It is a miracle that this extraordinarily fragile vase survived half a century in a home surrounded by countless pets," Nicolas Chow, chairman of Sotheby's Asia, said in a press release prior to the sale.