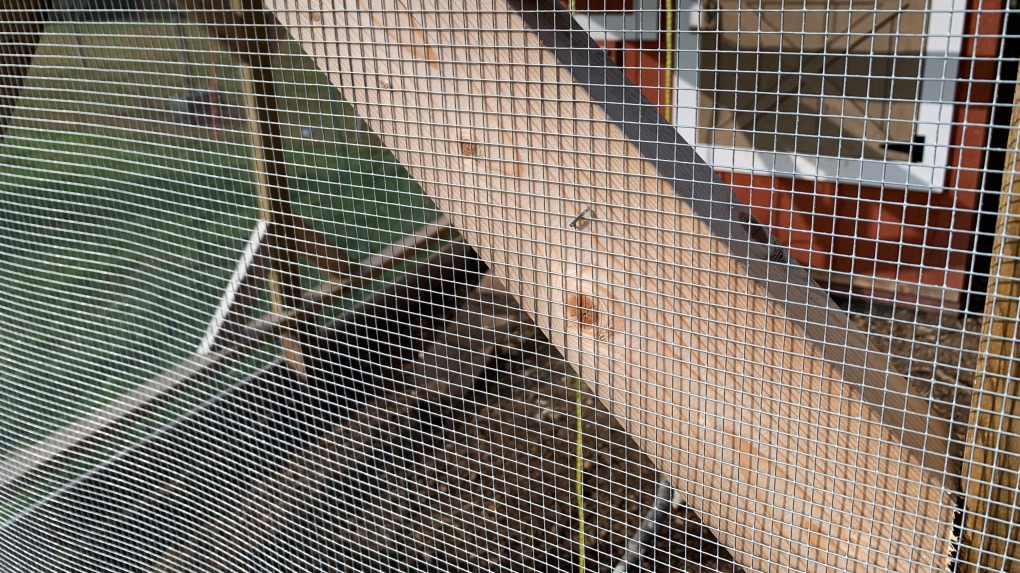 Canadian folk singer-songwriter Dave Gunning ran into the chicken wire shortage when he decided to raise laying hens on his Lyons Brook, N.S. property after most of his concerts were cancelled for 2020 due to COVID-19. (THE CANADIAN PRESS/HO)

HALIFAX -- After the pandemic prompted the cancellation of most of his concerts for 2020, Dave Gunning decided to raise laying hens on his rural Nova Scotia property.

He immediately ran into a problem: Chicken wire was nowhere to be found.

The Canadian folk singer-songwriter looked for the product at farm stores in Pictou County, and then expanded his search to local hardware stores.

Gunning eventually ordered two rolls of steel fencing online from Home Depot. But days before it was set to arrive, his order was cancelled.

"My credit card was refunded with an email saying it was backordered," he said in an interview from his home in Lyons Brook.

His experience is part of an unusual months-long shortage of chicken wire stemming from supply issues and surging demand that suppliers say is slowly easing and should clear within the next month or two.

Industry experts say the scarcity started after factories in China -- which has largely cornered the galvanized steel wire market -- idled operations during the initial outbreak of COVID-19.

David Musarai, co-owner of Dupont Wire Ltd. in Toronto, said container shipments of wire from China stopped for almost three months because of lockdowns in the Asian country.

"Everybody just ran out of inventory," he said. "All the orders were delayed until the mills in China started back up again."

Yet the shortage continued even once the global supply chain was back up and running due to unprecedented demand for poultry netting and other mesh wires.

Many farm and hardware stores sold out of chicken wire as stay-at-home orders and concerns about food security led to a surge in people looking to grow their own food.

Some used wire for chicken pens while others enclosed gardens to ward off pests.

"There was a run on chicken wire," said Jest Sidloski, vice-president of marketing at Peavey Industries LP, which has hundreds of stores across Canada under the banners Peavey Mart, TSC Stores, ACE Canada and MainStreet Hardware.

He said it was a strong year for all things homesteading, including live poultry chicks, chicken supplies, gardening materials and canning supplies.

But Sidloski said sales of wire fencing have been unprecedented.

"We've been selling out of chicken wire as fast as we can get our hands on it," he said. "There were certainly supply-chain issues but demand has been really strong."

Sidloski added: "People want to grow their own food. They want to learn to raise chickens and do their own fruit and vegetable canning."

While suppliers say the chicken wire backlog should be cleared over the next month or so, determined hobby farmers and gardeners have had to get creative in the meantime.

"We just had so much time at home that this was our chance to do it," Gunning said. "I went to a local store called Hector Building Supplies and that's where I ended up getting the hardware cloth."

Hardware cloth tends to be more expensive but is made from a stronger gauge metal that is either woven or welded into a square or rectangular grid.

While both are used as chicken fencing, hardware cloth is better at keeping out predators.

"Raccoons will kill a chicken and foxes will steal them," Gunning said. "And weasels are serial killers. They'll get in and kill every chicken. The hardware cloth keeps everything out."

Yet rodents and wildlife can also be an issue for gardeners, and many also rely on chicken wire.

Sylvain Charlebois, a professor of food distribution and policy at Dalhousie University, said food security has been a key theme during the pandemic.

The director of the Agri-Food Analytics Lab said many people started growing food for the first time during the COVID-19 shutdown.

"People have been cooking more and producing food in their backyard," he said. "It's understandable that we've seen a shortage of equipment related to that."

Emily Tregunno, co-owner of the Halifax Seed Company, said it was a busy year for the family-owned seed company that traces its roots back to1866.

"We did see an increase in people either looking to expand their garden or get into gardening for the first time," she said.

But when she moved the plants to a raised bed outside, she had trouble finding chicken wire to ward off the city's notoriously pernicious squirrels and raccoons.

"I biked to our neighbourhood Home Hardware and they were completely sold out," Mandair said. "That's when I learned about the shortage."

She ended up finding what she needed at a Home Depot, she said.

Ben Robichaud, who works at Clarence Farm Services Ltd. in Truro, N.S., said many people came into the store looking for chicken wire. If they were out of stock, he said they ending up buying another similar product.

"People just moved to the next thing and it put pressure all the way down the line," Robichaud said. "We've had some come in dribs and drabs but no one is getting exactly what they want."