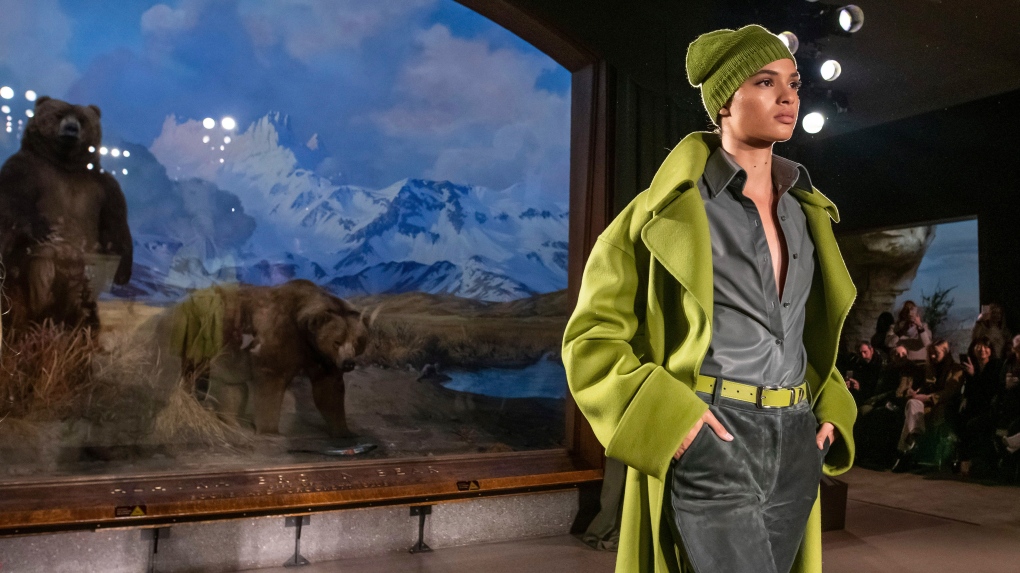 The Brandon Maxwell collection is modeled at the American Museum of Natural History during NYFW Fall/Winter on Saturday, Feb. 8, 2020 in New York. (Photo by Charles Sykes/Invision/AP)

NEW YORK -- There's always a crowd at a Brandon Maxwell fashion show, but the audience on Saturday night included more than the usual human fashionistas: A majestic gathering of Alaskan moose, bison, brown bears, Bighorn sheep and caribou were also enjoying the show at the American Museum of Natural History.

Maxwell said backstage that he'd wanted for years to do a runway show at the iconic Manhattan institution, and he had asked many times. Then museum officials came to him four months ago, asking if he'd contribute to an upcoming exhibition, "The Nature of Color." He decided that would be a perfect time to ask if he could stage a show there, and they immediately agreed, he said.

Maxwell's runway snaked through the Hall of North American Mammals, past some 43 dioramas representing dozens of species. The grand finale was the dress Maxwell had made specially for the upcoming exhibit: A fiery red, diaphanous, flowing gown, with a bow around the neck.

That gown was well suited to the Oscars' red carpet, as were a number of other flowing creations, including a few in a glamorous citrus green colour, and a white gown with a translucent cape. But Maxwell declined with a coy smile to answer whether one of his designs would be finding its way to Sunday's ceremony in Los Angeles.

Saturday's show had an almost a raucous atmosphere, perhaps partly because cocktails were served beforehand in the museum lobby. But it was mostly because the models were routinely cheered as they strutted the runway by, well, actual cheerleaders: Gabi Butler and Lexi Brumback, who are featured in the Netflix docuseries "Cheer." Their enthusiasm brought smiles to the faces of many of the models, who were unable to maintain their requisite eyes-straight-ahead, serious-face expressions.

One of the top attractions on the runway was supermodel Bella Hadid, who walked twice, in two midriff-baring outfits: first in a casual ensemble with shiny silver trousers and a bra-top covered by a black jacket, then in a glamorous black ensemble with a wide skirt and a sleeveless top with huge horizontal slit, all topped with a black beanie hat.

Asked how the unusual animal presence had influenced this collection, Maxwell replied: "I grew up in east Texas, don't forget it. Out here in nature, in front of all these animals, this is my home! I mean, not THOSE animals."

He added: "My Mom bawled crying when she walked in. She said, `This is the space for you.' I hope it was. I'm happy."

And asked to name his favourite mammal on display, he said "the bear of course," and imitated a bear growling and clawing at the air. "To me, that's what you try to do in Fashion Week, come with a bit of power and force," he said. "Power and force, for eight minutes."