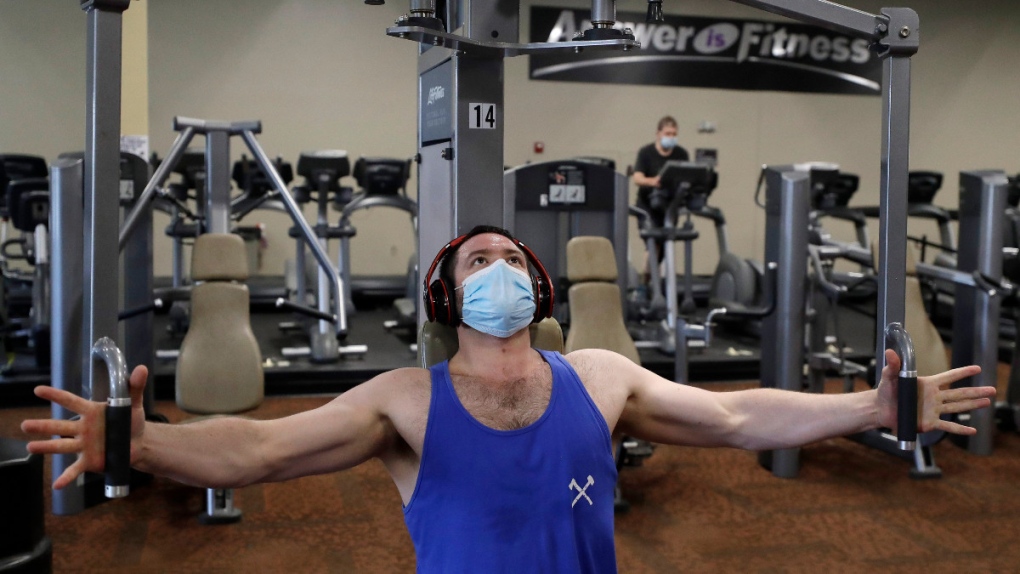 A customer at Answer is Fitness gym, who asked that his name not be used, works out on a piece of exercise equipment at a gym in Canton, Mass., on July 6, 2020. (Steven Senne / THE CANADIAN PRESS / AP)

Sean Barron had been working out five days a week at a London, Ont., gym before the COVID-19 pandemic shut down fitness facilities across the country in March.

It wasn't long into lockdown that he felt the flabbiness expanding around his midsection, and the progress he had built up over 2 1/2 years slipping away.

"I was doing really well working with (a personal trainer), seeing a lot of results, so it was a very frustrating time for all this to happen," Barron said. "And then being at home, I was just getting too comfortable.

"Working from home, eating at home, having the kids at home. It was really tough to get into a routine."

Barron has been back to his gym almost daily since it reopened three weeks ago, slowly ramping back up his fitness level. And despite feeling frustrated over his setbacks -- and the extra 10 pounds he had gained during lockdown -- he didn't hesitate jumping back into gym life.

Any concern Barron had about returning to a public fitness centre with a pandemic still lingering were assuaged by added safety measures at the facility, including spread-out equipment and machines, increased sanitization and widespread use of face coverings.

Those types of precautions are commonplace in gyms since they started reopening across Canada.

British Columbia was first to open its fitness doors in mid-May and Manitoba, Saskatchewan, New Brunswick and Nova Scotia followed in early June. Quebec and Newfoundland opened their facilities later that month and most of Ontario opened mid-July, though some regions, like the Greater Toronto Area, were held back until last week.

Gretchen Kerr, a professor in kinesiology and physical education at the University of Toronto, says people will react differently to gym reopenings. Some won't have any qualms about returning, while others will hold off until the pandemic subsides further.

But those going back to pre-pandemic routines have likely noticed changes in their bodies since March, Kerr added, and there are going to be learning curves as people start back up after a lengthy layoff.

While some, like Barron, can use body changes as motivation, Kerr says that can be a tougher challenge for others to overcome.

"For people who are fit, we remember how tough it was to get fit and get to the point where we enjoyed (working out)," Kerr said. "You need a certain level of fitness to reach that enjoyment, otherwise working out is really tough.

"And I think we're going to be reliving that in some ways, going back to: oh my gosh, this is hard again."

Camille Charbonneau, a mental performance consultant in Montreal, says loss of progress will be hard for some to deal with.

It's also an easy trap to fall into mentally.

"The main hurdle I'm seeing is my clients are always comparing themselves to where they were three, four months ago," Charbonneau said. "They're excited to be back but they have a lot of negative thoughts like: 'can I push this weight again? And if I can't why not?"'

That might mean spending three to four weeks reacquainting your body with the types of workouts you used to do, she said, adding that ramping up too quickly can lead to injury.

"It's normal to be feeling this way to have these negative thoughts," Charbonneau said. "But I tell clients: let's focus on your journey and your progress and forget where you were before because that's not where you are now."

While gyms are open for business, it's not exactly business as usual -- especially not for those who view working out as a social experience.

Group fitness classes will be limited if offered at all, and chatting with staff and other gym-goers can be risky at a time when people are expected to keep a safe distance from others.

Kerr says that lack of social interaction was part of the problem with online home workouts people turned to during lockdown.

While some will always prefer to keep their sweat sessions solo, Kerr says there is value in group fitness activities.

"Many of us were missing the social benefits of fitness. We haven't had that kind of social aspect during the pandemic."

And dietary changes -- with many of us eating or drinking more than usual while stuck at home -- often compounded the problem.

Getting back to pre-pandemic shape will be tougher for some people than others, Charbonneau said, but it can be done.

"It really depends on the person's foundation and how long they've been training," she said. "But people will have to throw their egos out the window and not expect anything right now.

"Just do things safely and it will come back very quickly if they continue."

This report by The Canadian Press was first published Aug. 5, 2020