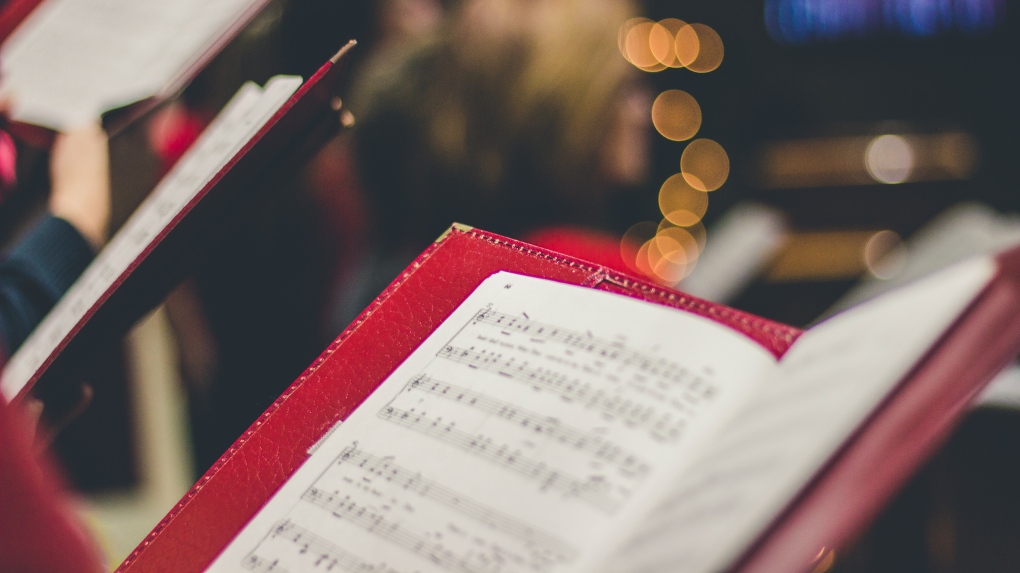 A holiday music book is seen in this file image. (Unsplash)

TORONTO -- Carolling groups and church choirs across the country are having to adapt their traditional holiday performances as COVID-19 has shifted the ways they celebrate the holidays.

In Atlantic Canada, East Coast Carolling typically books private events, family gatherings and personal performances during the holiday season, but this year thegroup’s schedule has been reduced as COVID-19 restrictions make it difficult to preform.

“I represent carollers in New Brunswick and Nova Scotia, but this year we've had no bites from New Brunswickers to begin with and now almost everything I had in place has had to be cancelled in the Halifax region,” John Lindsay-Botten, founder and director ofEast Coast Carolling, said in a phone interview with CTVNews.ca.

The group has taken to video conferencing for some ofits performances, which led to the group’s first-ever booking in Ontario, a group home in New Hamburg.

When they do perform outside in public or private settings, however, the carollers are wearing masks and spread apart to meet physical distancing guidelines.

“Four of us can stay physically distant from our listeners,” Lindsay-Botten said. “You ring the bell and then go back at least six feet while masked. We'll still be singing in that way. It's a totally different look.”

Singing has become one of the concerning activities for public health officials. In the United Kingdom, carolling and brass performances have been banned in the resort town of Blackpool, while a group of musicians sent a formal letter to the U.K. secretary of state urging that carolling be among the permitted activities once the country comes out of a lockdown on Dec. 2.

“Carol singing is a fundamental part of the U.K.’s culture, and an essential outdoor element of the spiritual uplift that Christmas brings across the whole of society,” the letter reads. “It is vital that it is allowed to take place so that people have hope and joy at the end of what has been a tumultuous, unhappy and lonely year.”

In a statement, the Ontario Ministry of Health said what is permitted with regards to singing varies depending on the region.

In green, yellow and orange levels, singers are required to separate from spectators “by plexiglass or some other impermeable barrier,” while singing is prohibited in the red and grey levels.

A spokesperson for Alberta Health said the province “strongly” discourages congregational singing, unless it is required for worship and the singer must be masked at all times.

In Newfoundland and Labrador, public health officials urged residents to stick to their households of close contacts when mummering this holiday season.

Mummering is a popular tradition in the province that involves residents going door-to-door in disguises and often break into song and dance when allowed into someone’s home.

Because of these restrictions and recommendations, some groups aren’t meeting in person for their performances. The United Union Church, a predominantly Black congregation in Montreal, has been meeting for services virtually since March and intends to do so for their Christmas performances next month.

“What we're trying to do is have a more musical kind of service for the Christmas Sunday, the last Sunday before Christmas,” said Rev. Dr. Robert Thompson, the minister of Union United Church.

Thompson said his organist has an organ at home so they’ve been able to use the instrument in addition to the choir or gospel during their traditional Sunday service.

“It's a problem on Zoom because everybody moves a little different speed and it echoes,” he said.

Thompson said on Christmas Day he intends to set up a virtual “chit chat” where members of his congregation who might be by themselves over the holidays can talk to him one-on-one.

Not everyone is taking the virtual approach, however.

In Toronto, a spokesperson for McGregor Carollers told CTVNews.ca they do not have the capacity to take their performances online, so they are going to take what they can get when it comes to bookings.

Meanwhile in Saskatchewan, the Greystone Singers, a choir group based out of the University of Saskatchewan, is taking a different approach.

While under normal circumstances they would be available for private and public performances, this year the choir has decided to record their songs individually, mix together the performances and sell digital copies.

“It's much more in-depth and intensive process then we've done in the past, obviously, but it's still really important for the Greystone Singers here to spread their holiday cheer,” said Jennifer Lang, director of choral activities at the University of Saskatchewan.

The group will be selling packages of three songs, with certain themes to choose from, including “Missing you this Christmas” with songs about being alone over the holidays, or “Kiss me under the mistletoe” with more romantic songs.

“They can customize the carols as well to put photos of the purchaser's family and friends over it and then it creates a little more of a personal meaning,” Lang said.

Thanks to the management and staff at Southwest Properties for bringing us to Bishop's Landing for their tree-lighting...