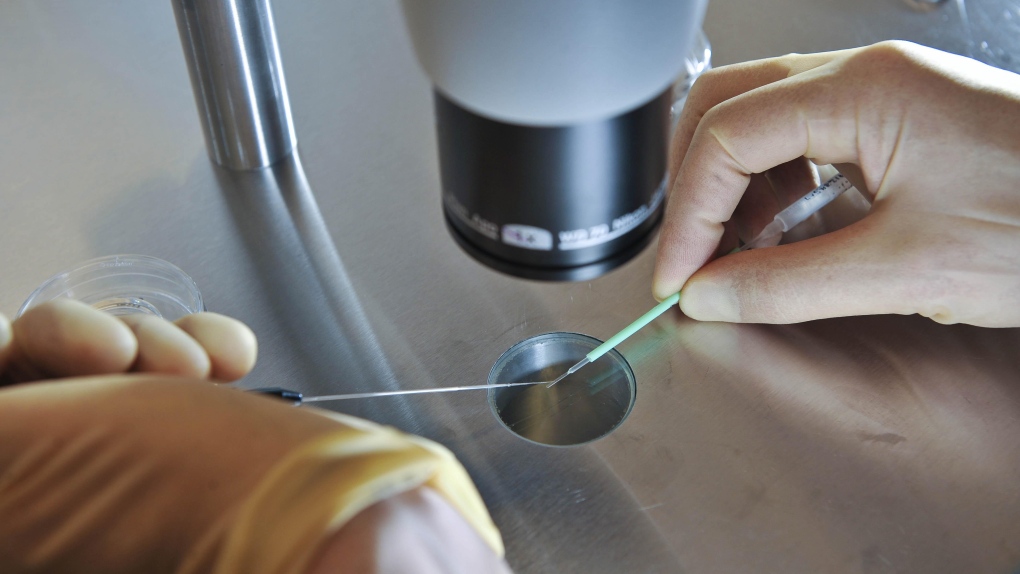 TORONTO -- Women who are considering having their eggs frozen to prolong fertility should be aware there is no guarantee they will have a baby, despite spending thousands of dollars on the retrieval procedure and storage, researchers say.

In an analysis published Monday in the Canadian Medical Association Journal, the researchers say primary-care doctors need to counsel women that so-called social egg freezing isn't insurance against future infertility and point out the high cost and medical risks of in-vitro fertilization.

"It's really getting marketed like it's a back-up plan, it's insurance," says lead author Angel Petropanagos, a post-doctoral fellow at Dalhousie University. "The problem is that the success rate isn't really that great.

"It's not guaranteed, so you can spend all this time, energy and money investing in egg freezing and think you're covered, and when it comes down to it 10 years down the line, the IVF won't result in a live birth," she said from Halifax.

"Some women might understand that, that it's still a gamble. But depending on how this is marketed, some women might see this as a guarantee when it's really not."

Egg freezing has been used for some time to preserve fertility in young women and girls treated for cancer, for instance. But more women who are delaying motherhood to build a career or who have not yet met a suitable partner are also electing to cryo-preserve their ova.

Females are born with all their eggs, or oocytes, but over time they begin to diminish in number and degrade in quality. To protect or preserve fertility, a number of eggs can be retrieved following hormonal stimulation of the ovaries, then flash-frozen and stored.

In October, the Canadian Fertility and Andrology Society released a position paper on egg freezing, describing it as "an option for women wishing to preserve their fertility in the face of anticipated decline." That contradicted a position statement by the American Society for Reproductive Medicine and the American Society for Assisted Reproductive Technology (ASRM-SART), which cautioned again the practice.

Despite that position, some U.S. companies including Facebook and Apple have offered to cover limited insurance coverage for the cost of egg freezing for their employees.

But those U.S. statistics also show the IVF pregnancy rate using frozen and thawed eggs is just 4.5 per cent to 12 per cent -- and that's primarily among women who had their ova preserved before age 30.

Rates of pregnancy and live births decline among women as they age, and that's likely true for those who have their eggs frozen when they're older, said Petropanagos.

"So the concern is if you're in your mid-30s or late 30s even and you want to use social egg freezing, there's not great data for how viable those eggs are going to be when frozen and then you try to use them later for IVF.

"If you froze your eggs early enough, you have young oocytes and you reduce your chances of having a child with chromosomal abnormalities.... You'd have a better chance of pregnancy with younger eggs than with older eggs."

Using IVF to get pregnant also carries a number of risks, including multiple births, premature delivery and low birth-weight babies.

Dr. Ken Cadesky, medical director at Life Quest Centre for Reproductive Medicine in Toronto, said more women are approaching the clinic about banking their eggs for a future pregnancy.

"It's not a flood, but it's definitely increased over the last three years," Cadesky said Monday, estimating that Life Quest gets about 60 to 80 requests a year.

Women are considered as candidates up until their 38th birthday. They must go through medical and psychological testing, as well as counselling about potential risks of powerful ovary-stimulating medications and those linked to future IVF before being accepted as clients.

But the clinic has no way to judge the success of the program, Cadesky said.

"Our program has been going on in earnest for the last three years, but just like the rest of the world, not a lot of patients are in a position yet where they wish to utilize the eggs. About 90 to 95 per cent still have them frozen, they've not come forward to use them," he said.

"In theory, it should work ... but since around the world the majority are still frozen, we don't know for sure."

Petropanagos said it's difficult to know how many women across Canada are inquiring about or pursuing elective egg freezing, but family physicians and other primary-care doctors are in an ideal position to discuss the risks and benefits of the technology "and really frame it in the context of their broader reproductive health."

Doctors also need to inform women that provincial health insurance programs don't cover social egg freezing or related IVF procedures, such as embryo creation and transfer, which could add thousands of dollars more to the cost of trying to have a family.