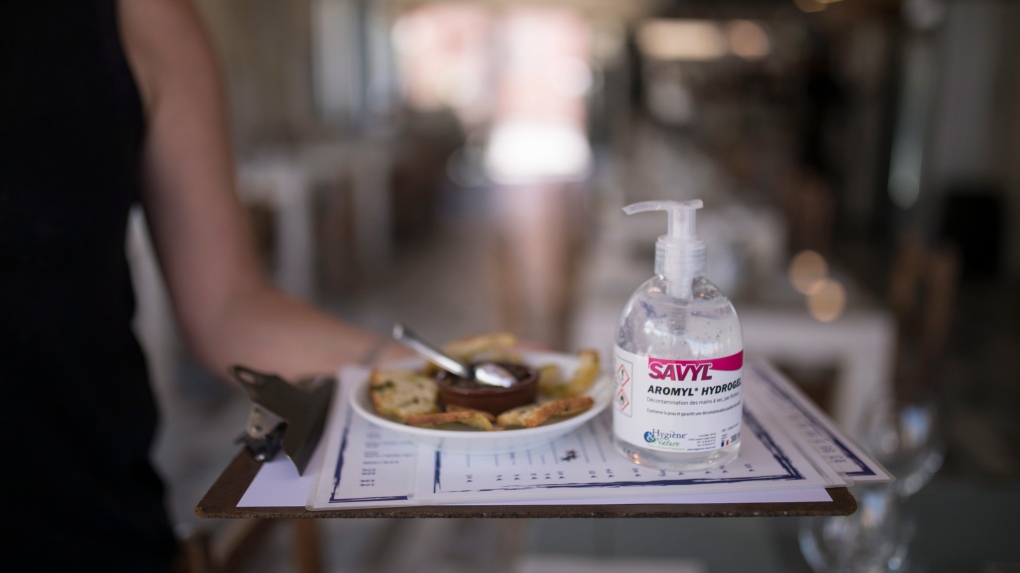 Dining with your closest friends in a Plexiglas bubble, or grabbing a solo bite on a "bumper table" encircled by a large rubber tube, restaurants are trying to find creative ways to keep their customers safe -- and physically distant -- as they reopen during the COVID-19 pandemic.

But while some of these novel ideas might look interesting right now, experts say they're not to be expected in the majority of post-pandemic restaurants.

"I mean, some of these are very funny, but I think you'd go to something like that once and then you wouldn't keep going," said Viz Saraby, a professor of interior design at George Brown College in Toronto.

What's more likely to happen, Saraby says, are subtle changes to restaurant spaces, like placing tables further apart or setting up physical barriers between them, and cutting capacity in half.

Emma Rankin, an instructor in the tourism, hospitality and culinary arts program at Fanshawe College in London, Ont., expects restaurants to move away from built-in booths and towards movable furniture that offers more flexibility within a space.

Bar surfaces may also need to be widened to help maintain physical distancing between patrons and bartenders, though Rankin says most restaurants with bar seating already have a buffer of a few feet there. Reduced capacity will also mean reduced bartending staff to move around behind the bar.

While these measures might work in making restaurants safer, they also run the risk of making them less appealing to certain customers.

"I think the fundamental reason why people go to restaurants as opposed to ordering in and eating at home, is because of the vibe of the restaurant," said Saraby, who specializes in retail and restaurant design. "You don't go into a place that's empty because you think it's probably not very good and you don't want to sit there by yourself.

"So these solutions deal with social distancing, but the consequence is maybe missing the mark in terms of creating that feeling of being together, even though you don't know the other people in the restaurant."

Rankin, who's also the manager of The Chef's Table, a teaching restaurant for Fanshawe students, says some of that lost ambience can be recaptured with decor.

But other proposed safety precautions, like taking temperature checks of patrons or pre-screening them before they walk in, can really dampen the mood of the dining experience.

"We lose the spontaneity of just going out and grabbing a bite," Rankin said. "It's going to be have to be thought out, reservations made, and just the organization of going out and dining will obviously change the feel for the customer."

Changes to service could also be in place when restaurants reopen their doors, with some moving towards cell phone apps for placing orders, and cutting back or eliminating servers altogether.

Saraby argues that wait staff are part of the dining experience, and "that banter and chit-chat" shouldn't be entirely removed. Rankin agrees, saying food service is "very much dependant on the human element."

But Rankin expects it will come down to ensuring customers feel as safe as possible, especially those who may be wary of going back to a restaurant setting in the first place.

That could mean moving toward more open-plan kitchens, where diners can see the way their food is being handled, and asking servers to wear gloves and face masks -- for now, anyway.

Keith Warriner, a professor of food sciences at the University of Guelph, expects patrons to be worried about restaurants.

He believes places with patios will likely attract more customers -- at least during the summer months as restrictions start lifting -- because air flow between people can help restrict the spread of the virus.

But things like utensils can be particularly dangerous high-touch surfaces, he says, and gloves can actually spread virus and other bacteria more than if servers just practised regular hand-washing instead.

"At the end of the day, there's more chance of getting (the virus) from the waiter than it would be from a spoon or a coffee cup," Warriner said. "But to be honest I don't know how people will feel going into a restaurant."

Saraby believes restaurants will likely lose a portion of their regular customers, especially those who are older or in higher-risk groups for severe COVID outcomes. That, coupled with reduced capacity will make it much harder for some places to stay afloat.

But there are also plenty of people eager to return to their favourite eateries.

"I sense that the youth don't have an appetite for this shutdown, and they would like to get back to using restaurants the way they did before," Saraby said. "So yes, we might lose a few but I think there will still be some restaurant culture.

"It just won't be as prevalent as it was before."

Rankin expects to see a "50/50 split" between those who want to go back to restaurants and those who will continue to avoid them long after they reopen.

And it will fall on the restaurant to convince the public their spaces are safe.

"Everybody has a very, very different sense of comfortability with the whole pandemic. ... So there's a huge swing there," she said.

"So that's going to be a huge part of the marketing strategy (for restaurants), to show the spacing and other precautions they are willing to take for the customer."