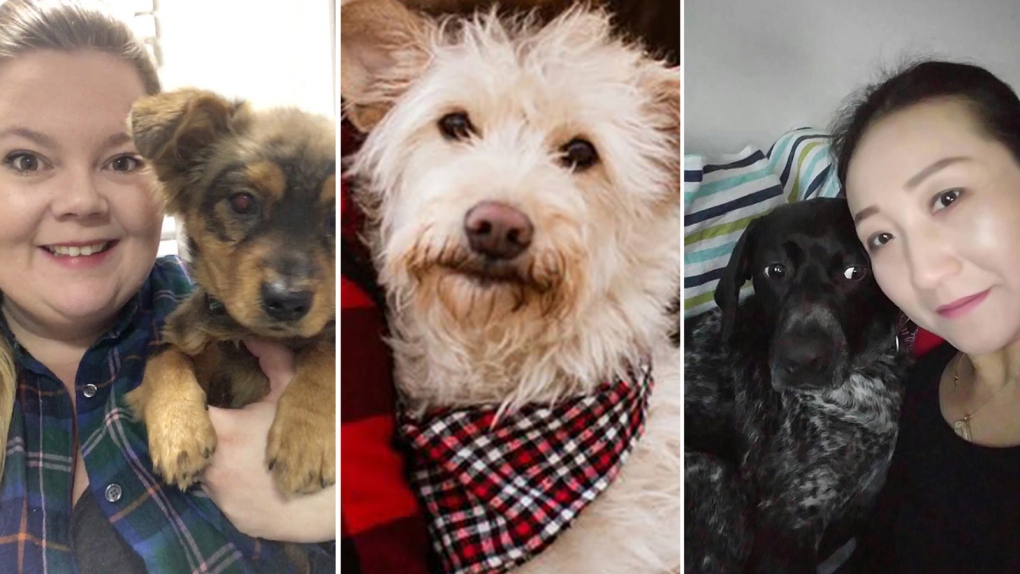 Families chartered a plane from Shanghai to fly their dogs and cats home, which would touch down in Vancouver, then Seattle. (Kaitlyn Hooper, Stacie Lynn Photography, Catherine Hildreth via CNN)

In May, Kyla Robertson was trying to find a way to bring Sugar home.

Ready to return to Vancouver after two years in China, Robertson and her husband ran into hurdle after hurdle trying to book a plane ticket for their rescue terrier mix as the coronavirus pandemic was taking hold of the world -- shutting cities and airports down.

Soon they'd realize they were far from alone in their efforts to get their dog on a plane. Five hundred people joined a WeChat group the two created -- initially meant as a tool to gather ideas and information on transporting pets.

Other owners were mostly from cities throughout Canada and the U.S. Many had left China hurriedly months ago to see friends or family, thinking they'd be back with their furry roommates in days. But then coronavirus hit and hundreds of travelers were stranded, while their pets remained in the care of either boarding facilities or acquaintances.

Soon, an idea emerged: They'd charter a plane from Shanghai to fly their dogs and cats home, which would touch down in Vancouver, then Seattle. That plane will also help reunite families by bringing back Americans or Canadians stuck in China.

They're calling the effort "Mission Impawsible."

Arranging the flight was no easy task. Dozens of group members -- from China, the U.S. and Canada -- collaborated on different parts of the plan often with more than half a day's hour difference between them. Nights were long and sleepless.

Many, like dog owner Catherine Hildreth, tasked themselves with learning how to edit videos and design T-shirts, in order to help the group raise awareness of their efforts and fundraise.

The group shared details of the flight on social media and messaging apps and began selling tickets to other Canadian or American citizens hoping for a flight back to their families, after meeting with each consulate. And they enlisted some of those passengers to accompany each dog and cat on the flight.

"It's been a whirlwind and definitely never in my wildest dreams did I think that creating a WeChat group was going to lead me here six weeks later," Robertson told CNN. "Chartering a flight across the ocean for my dog."

And finally, the group secured a flight for July 18. One hundred furry passengers are booked.

The journey has been a ray of light amid dark times, some group members say, a reminder of what strong collaboration can look like when everyone feels so isolated.

"It's just been kind of one of those things where we've been like, .... at first, 'Whoa, can we even pull off something like this?'" Robertson said. "We don't even know each other, we haven't even met in person, we're from different places.

"If you kind of just put your mind to it and just work really hard... you can make this happen," she said. "I think that's what's been amazing for me."

A COMPANION ON HIS WAY

One of the people waiting for her dog on the other side of the ocean is Kaitlyn Hooper, who now lives in Ontario after a string of devastating news she had to endure without her best friend.

One of the last moments she recalls spending with her rescue, Ted, was the dog's long licks on her face, shortly before a phone call let her know her dad had passed away.

Hooper, who until December taught at a Canadian international school, flew back with return tickets scheduled in three weeks' time. But then another piece of news hit: her mom was diagnosed with stage four lung cancer and passed away shortly after.

"The world was just in a dark place," she said. "So I started looking for ways to get my dog home."

She tried working with an agent and once she gathered the money to get Ted on a plane, the flight was no longer operating. So when a friend passed along information of the charter flight that would get pets to their owners, she started paying attention. But having no one to accompany her dog on the flight, as required, she shared her story with the group in hopes of a volunteer to accompany him.

That volunteer was Robertson, who along with her husband and their one dog, signed up to be Ted's plus one.

"I've never met Kyla and she's willing to accompany my dog on a 12-hour flight. And that's amazing," Hooper said. "When the world has been so dark for the last few months, it's really added a lot of light in the last few days."

And it's brought light to the past few weeks as well, she says, seeing a group of strangers form their own determined committee to bring their pets back home. The long nights and endless communications, she says, have been worth it.

"It's hard to get out of bed in the morning and having a dog, it makes you get up, go outside, get some fresh air," she says. "And I think that mental health benefit of having a pet outweighs any costs or frustrations or 3 a.m. text message exchange trying to coordinate all aspects of the flight."

In North Carolina, Hildreth has busied herself creating videos and designing T-shirts for the cause -- and counting down the days until she's reunited with her "fur baby."

Hildreth and her husband, who both worked for the U.S. Army, rescued their German short-haired pointer in 2015. She says the dog looked so sad, she instead decided to name him -- fittingly -- Happy. The two planned a four-day trip in January to the U.S. from China to begin coordinating for a hopeful move here over the summer.

But the trip, amid a spreading virus, turned into a permanent change.

She is now coordinating efforts to bring dogs to the East Coast once the charter flight lands in Seattle -- about a 2,000-mile journey from North Carolina. During a global pandemic when more families across the world were separated or remain stranded, the group's efforts have given her hope.

"Every night, I stayed up to talk to people in China," she said. "Can you imagine? Those people back in China stayed up all night to talk to Canada and to talk to everybody to try to figure these things out."

While her friends in China suggested she give her dog to another family, it wasn't an option for her.

"He's my family. I cannot give up on him. I've got to do anything I can to bring him home," she said.

"So it is a Mission Impawsible," she said. "Right now, the people who love their pets is the main focus."