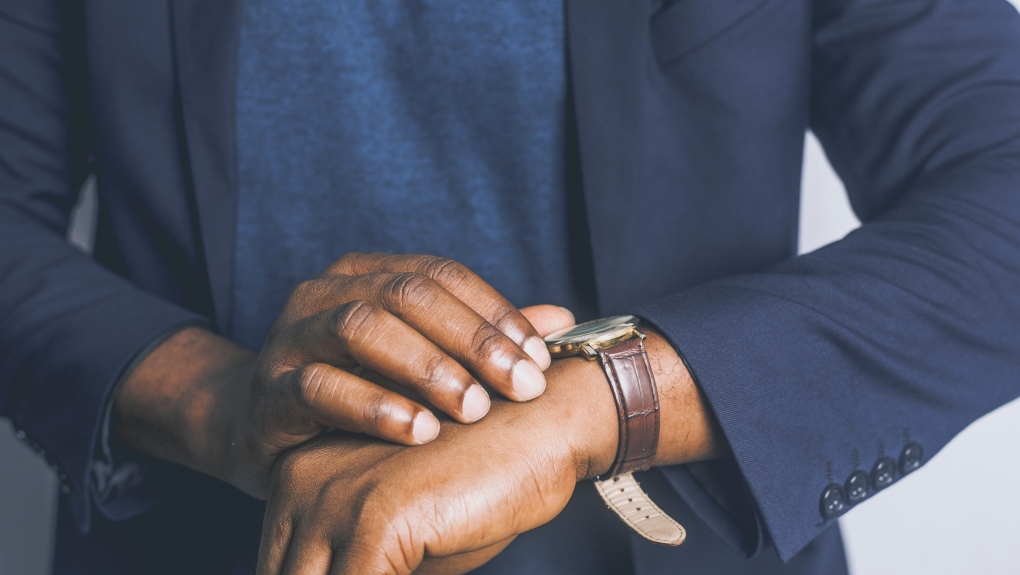 A man checks his watch in this stock image. (Pexels)

TORONTO -- People’s perception of the passage of time has been significantly affected by pandemic lockdown measures, according to new research which suggests that age and social satisfaction can influence how quickly the days and weeks seem to pass.

To determine if people were perceiving time differently during the pandemic, researcher Ruth Ogden, a senior lecturer in psychology at Liverpool John Moores University, conducted a survey of 604 participants in the U.K.

The online questionnaire, conducted from April 7 to April 30, asked respondents to rate on a sliding scale how quickly they thought time was passing over the course of a day and an entire week in comparison to pre-lockdown times. They were also asked to evaluate their emotional state, how busy they were, whether they believed they were at risk of contracting COVID-19, and their satisfaction with social interactions.

“What I was interested in finding out was, what's the prevalence of distortions of time? So is it just that everyone experiences it normally? Or are people experiencing it differently? And what are the things that make time pass quickly or slowly in this situation?” Ogden explained to CTVNews.ca during a telephone from Liverpool on Thursday.

According to her findings, which were published in the open-access journal Plos One on Monday, there wasn’t one universal way people perceive time during the pandemic.

Nearly 20 per cent of respondents reported that time was passing at a normal rate while approximately 40 per cent found time was going by more slowly than before the lockdown. The other 40 per cent said it was passing more quickly.

“So there seems to be this almost like clear split in the way that people are experiencing time,” Ogden said. “It’s not that everyone’s lockdown has dragged by, some people’s has flown by.”

WHY PEOPLE’S PERCEPTION OF TIME VARIES

In an effort to understand the disparity, Ogden examined how different factors, such as participants’ ages, home life, and social interactions may play a role.

She found that age was a key factor. Respondents who were older, particularly over the age of 65, were more likely to believe that time was passing more slowly during the lockdown than before.

Another important predictor of how the survey’s participants perceived time, according to Ogden, was how satisfied they were with their social interactions during the pandemic.

Those who were more satisfied with their social lives reported that time was passing more quickly than normal, while those who were unsatisfied found it went by slower.

“What I thought was really interesting about that was that it really was the quality of social interaction that people were experiencing, not just the presence of social interaction,” Ogden said. “And I know this because the number of people that someone lives with, so how many people are in the household, didn’t affect how they experienced time.”

Ogden said she found no differences in the perception of time between participants who lived alone and those who lived with others.

“So just having people around didn’t really seem to be that important,” she said. “It was really about the quality of the interaction and whether they found it satisfying.”

Additionally, Ogden said the survey found how busy a participant rated their life to be also affected how they perceived time. The busier someone believed they were, the more quickly time passed.

However, a person’s employment status or whether they were working remotely had no bearing on their perception of time.

Even though being really busy appeared to make time go by more quickly, Ogden said a participant’s level of stress seemed to have the opposite effect.

“It seems there must be like an optimum level of busyness where we’re just stressed enough, we’ve just got enough on to keep us occupied and to stop our minds from wandering to prevent boredom, but if we get far too stressed because we're far too busy, then we’re going to experience that sensation of time tracking again,” she explained.

Lastly, Ogden said she found it surprising that participants’ mental health, such as their anxiety or depression, didn’t affect how quickly they believed time was passing in lockdown. She said they’re evaluation of their risk for contracting COVID-19 also appeared to have no effect on their perceptions of time.

Ogden said she believes this might be related to people’s inability to go and spend time with their loved ones.

“I think that’s why level of satisfaction with socialization overrode every other measure of emotion that we had. It sort of encapsulated our feelings of anxiety and depression into that one single measure. So it became the most predictive [in the survey],” she said.