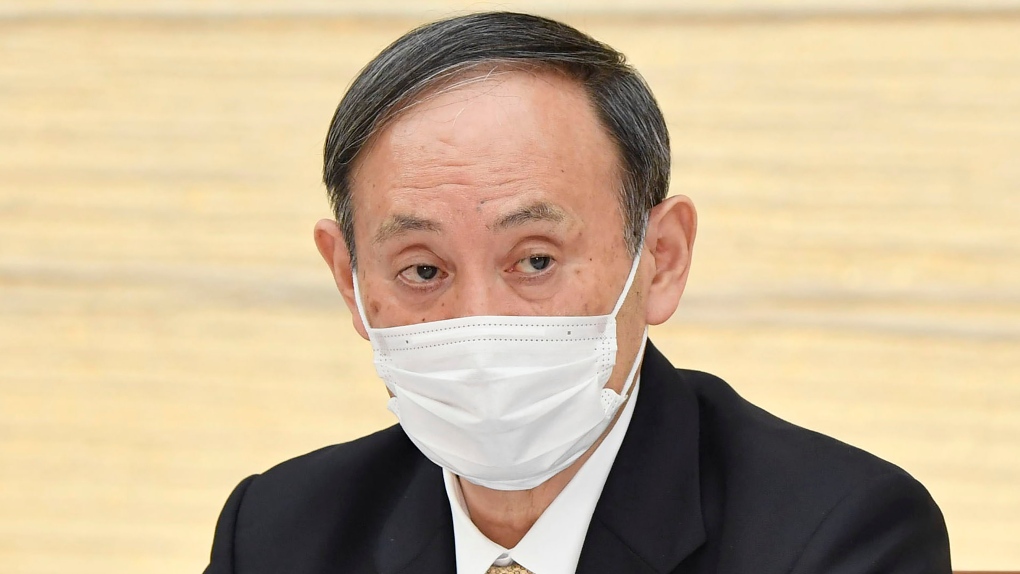 Japan's Prime Minister Yoshihide Suga speaks during a task force meeting against the coronavirus at his official resident in Tokyo on Feb. 26, 2021 (Yoshitaka Sugawara/Kyodo News via AP)

TOKYO -- Japanese Prime Minister Yoshihide Suga announced that his government is extending a state of emergency in the Tokyo region for another two weeks because its medical systems are still strained by COVID-19 patients.

At a government coronavirus taskforce meeting Friday night, Suga said the emergency will be extended through March 21 for Tokyo and three neighbouring prefectures, where the measure was to end Sunday.

He said medical systems in the region were still burdened with COVID-19 patients and more hospital beds have to be freed.

Suga declared a monthlong emergency on Jan. 7 for Tokyo, Kanagawa, Saitama and Chiba that was later extended through March 7. An emergency that applied to other urban prefectures was lifted last week, underscoring the government's eagerness to allow businesses to return to normal as soon as possible.

The state of emergency, which is a non-binding request, centres around asking restaurants, bars and other businesses to voluntarily close at 8 p.m. Japan has never had a mandatory lockdown but has managed to keep infections relatively low with social distancing and other voluntary measures.

Controlling the spread of the virus, along with progress in vaccinations, are considered key for Tokyo's hosting of the Summer Olympics, already delayed by one year because of the virus and due to start July 23.

Suga sought understanding for a two-week extension of the emergency he said will be the last.

"I will do everything we can to prevent a rebound of the infections and another state of emergency," he said at a parliament session.

Experts were divided over whether two weeks would be enough to get infections under control, as concerns are running high about the upcoming spring cherry blossom season, when many people come out and party.

Suga asked people to avoid big graduation parties and farewell and welcome events that peak in the coming weeks, with Japan's business and school year ending in March.

Tokyo Gov. Yuriko Koike and the heads of neighbouring prefectures had raised concerns that a lifting of the emergency could trigger a quick rebound in infections.

Dr. Shigeru Omi, a former World Health Organization regional director and head of the government COVID-19 taskforce, said Friday that the Tokyo region is prone to a resurgence and urged authorities to set up "a strong system" to prevent one.

Daily new cases in Tokyo have decreased significantly after peaking at about 2,000 in early January, but the decline has slowed recently. Tokyo on Friday reported 301 new cases, up from 278 the day before, raising its total to 112,925. Nationwide, Japan reported more than 436,000 cases and about 8,000 deaths as of Thursday.